As the 9-1 Gophers prepare for their final regular season road game Saturday at Northwestern, it’s a reminder this fall’s drive for a Big Ten West Division championship has been led by many contributors, including seniors like defensive end Carter Coughlin, who are nearing the end of their careers.

Winston DeLattiboudere, a senior who is Minnesota’s other starting defensive end, singled out Coughlin for his leadership, referring to the former Eden Prairie all-stater as the “glue” helping to bond the team. Coughlin took a leadership role early in his career at Minnesota including taking teammates to the family cabin, a new experience for DeLattiboudere, who is from Baltimore.

DeLattiboudere calls Coughlin “Mr. Minnesota” because his teammate is knowledgeable about football, the Gophers and how things work in the state. “You can always go to Carter, and Carter will always help you out,” DeLattiboudere said.

Coughlin’s leadership is so fitting given his family legacy at the University of Minnesota. His father Robert Coughlin played football for the Gophers, as did his uncle Mike Moe and grandfather Tom Moe, who also was interim athletic director of the University of Minnesota’s Athletic Department from 1999-2002. Coughlin’s mom, Jennie (Moe) Coughlin, was a three-time all-conference tennis player for Minnesota.

That family history certainly played a role in Coughlin’s decision to turn down offers from other schools including powerhouse Ohio State to play at the U. As a high school junior Coughlin told Sports Headliners, “I am going to help build the (Gophers) program brick by brick,” Coughlin said. “I am completely invested in Minnesota and that’s my final decision.” 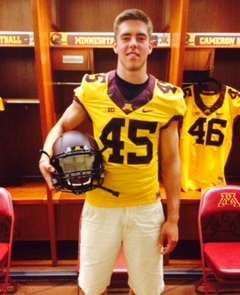 The “bricks” have been fitting nicely into place during Coughlin’s senior season with the program doing things that haven’t been accomplished for decades. Although injuries have been a problem this season, Coughlin was at his best in the November 9 upset win over No. 5 ranked Penn State. He had a career high eight tackles, with three tackles for loss and one sack.

Coming into the season Coughlin was a Phil Steele fourth team preseason All-American. After the season, there will liklely be Big Ten recognition, if not national honors. He has NFL potential and has been invited to the Senior Bowl in January as a possible next step to a pro career.

With starting quarterback Tanner Morgan in concussion protocol, it raises the possibility Minnesota will have a new No. 1 Saturday against Northwestern. Head coach P.J. Fleck said the Gophers will prepare true freshmen backups Cole Kramer and Jacob Clark. He also said both could play Saturday.

Fleck will not be able to use Zack Annexstad, a starter part of last season who injured his foot in August and is still recovering. “He’s got about three to four weeks left, somewhere around there, and then he will be back,” Fleck said on his KFAN Radio show Tuesday.

It’s not known whether starting guard Curtis Dunlap, who didn’t play in last Saturday’s Iowa game, will return to the starting lineup for Northwestern.

When Badgers fans come to Minneapolis for the much anticipated Wisconsin-Minnesota football game November 30, some will head for the popular new Kollege Klub bar in Dinkytown. The KK Club opened earlier this year and is an expansion of the longtime KK venue in Madison.

No doubt ESPN College GameDay organizers have Minneapolis near or at the top of their potential destination list for November 30, with the Gophers and Badgers possibly playing for the Big Ten West Division title that day.

As of Tuesday afternoon, only several hundred tickets remained before the game sells out.

If Minnesota earns its way to the Big Ten title game in Indianapolis December 7, Gophers fans may travel in large numbers. A source at last Saturday’s Minnesota-Iowa game in Iowa City estimated 6,000 or more Gophers fans in attendance.

Most likely bowl invites in play for Minnesota with two games remaining on the regular season schedule are the Rose, Citrus and Orange.

The Twin Cities-based WCHA office is proud of the latest USCHO rankings with the Minnesota State men No. 1, and the Gophers No. 1 among women’s teams. The rankings by USA Today/USA Hockey magazine have the same teams in the No. 1 spots. This is the second consecutive week the Mavericks and Gophers have topped the rankings, per WCHA men’s commissioner Bill Robertson.

Minnesota State’s 28-man roster is a mature group, with 21 players who are 22 years of age or older.

The Minnesota Wild, at home tonight against the Colorado Avalanche, are unlikely to ever again see a schedule that will find them in St. Paul for just eight games prior to Thanksgiving.

Legendary Minnesota emcee Dick Jonckowski is in his second week of recovering from surgery on his left toe, but he will be able to work the Old Timers Hockey Association luncheon Monday at Mancini’s.

Jonckowski’s 76th birthday was October 22 and he received a telephone call from basketball Hall of Famer Rick Barry. The two have exchanged birthday wishes by phone every year since 1998.