The NFL trade deadline is October 29 but there seems zero chance the Vikings will move Stefon Diggs between now and then. Diggs has been mentioned nationally in trade rumors as recently as yesterday when he had 167 receiving yards and three touchdown receptions in the Vikings’ 38-20 win over the Eagles.

Diggs created controversy by skipping practices and meetings earlier this month, and was reportedly fined more than $200,000. The fifth-year wide receiver wanted to be a bigger part of an offense that was struggling with its passing game. Maybe his disgruntlement prompted opening things up the last two Sundays, including yesterday when Diggs not only caught seven passes (he dropped two) but ran the ball twice for 18 yards.

Before Sunday’s win Billswire.usatoday.com posted a story saying Good Morning Football Weekend host Michael Robinson speculated a Diggs trade was the most likely involving an NFL star before the October 29 deadline. The 4-1 Bills are chasing the 6-0 Patriots in the AFC East Division.

“They need another number one receiver,” Robinson said. “Zay Jones (wide receiver traded to the Raiders) has just got out of there. So I’m telling you, go get Stefon Diggs. He could be the piece, the secret piece to beat the New England Patriots.”

But six games into the season the Vikings seem too committed to their roster to shake things up by trading Diggs. With Super Bowl ambitions and coming off a failed season in 2018, they want to give quarterback Kirk Cousins the best and most familiar personnel possible to make the offense successful. Cousins was unfamiliar with Vikings receivers in his first season a year ago but now can take advantage of the knowledge he has about Diggs and others. That’s a comfort for the inconsistent Cousins.

Diggs is talented and experienced, and forms a big-play threat with Adam Thielen, the team’s other dangerous wide receiver. The Vikings, though, aren’t deep at WR and that’s another reason why a trade during the season makes no sense given Minnesota’s commitment to win now.

Donald Trump made no mention of Minnesota sports teams or celebrities including Cousins (the two spoke a week ago Sunday) when in Minneapolis Thursday night for a campaign re-election rally, but when the President was in Lake Charles, Louisiana the next evening he was touting the undefeated LSU Tigers and quarterback Joe Burrow.

The unseasonably inclement weather for Saturday night’s Minnesota-Nebraska game might have prompted a few Golden Gophers football historians to recall the late October upset of 10th ranked USC at old Memorial Stadium in 1955. Played in an October 25 snowstorm, the Californians acted like they had never seen snow (and many had not) and couldn’t wait to fly home. A mediocre Gophers team that won just three games all season, took care of the chilly and wet Trojans.

Gophers senior linebacker Kamal Martin was named Big Ten Defensive Player of the Week today for his 15 tackles performance in Minnesota’s win over Nebraska. He had six solo tackles for the 6-0 Gophers who are now ranked No. 20 nationally in both the A.P. and Coaches polls.

Former Gophers basketball captain Paul Presthus, now retired from the financial industry, is a starter at Braemar Golf Course in Edina. He only played 27 holes this season because of a torn Achilles suffered last October. Presthus and wife Linda celebrated their 50th wedding anniversary September 20.

Lindy’s college basketball magazine lists the top 150 players in the nation with Duke’s Tre Jones, the former state Mr. Basketball from Apple Valley, at No. 4. Another Minnesotan, McKinley Wright from Champlin Park and now at Colorado, ranks No. 10.

The state’s 2019 Mr. Basketball, Matthew Hurt from Rochester John Marshall, is preparing for his freshman year at Duke and Lindy’s ranks him No. 59 on its 150 list. “More than capable of leading the Blue Devils in scoring this year,” Lindy’s says.

No Gophers made the list, although Minnesota natives and sophomores Daniel Oturu and Gabe Kalscheur could be deserving of such recognition by next March.

The state’s pipeline of current top prep players includes Minnehaha super talents Jalen Suggs (class of 2020) and Chet Holmgren (2021). Both had recent visits to Gonzaga, with speculation the Spokane, Washington school could be the college choice for Suggs. 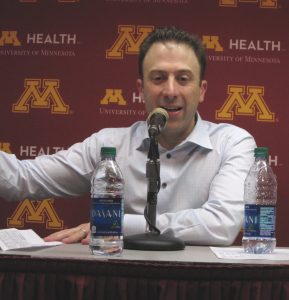 Lindy’s preseason top 25 of women’s teams includes Minnesota at No. 18. The Big Ten Conference schools ahead of the Gophers are No. 5 Maryland and No. 15 Michigan State.

Former Timberwolves player  Mark Madsen is in his first season of coaching at Utah Valley.