Mike Wright had a lawyer’s analytical mind, a teacher’s warm heart and the gut instincts of a great businessman. He was a friend and mentor to me dating back to the 1970s.

The 1959 University of Minnesota football captain died last week at age 81 after living a remarkable life that benefitted so many organizations and individuals including this writer. We shared a passion for football and the University of Minnesota. Those two things brought us together, but the relationship never would have lasted if not for Mike’s kindness and wisdom.

I regret not telling him how grateful I was for his friendship. A few years back he approached me about writing a book on his life, but the project never developed. Certainly my loss, but in recent times we did occasionally see each other at a breakfast club we belonged to. A tall man at about 6-foot-4, Mike greeted me with his friendly smile and soft spoken words. I can’t recall those words ever being mean spirited about anything or anyone. I was pleased to hear more than once how he enjoyed reading my column.

I first met Mike in the 1970s when he was a young lawyer with Minnesota-based Supervalu Inc. I was the editor of the University’s M Club publication, and he was serving as the volunteer president of the organization. The M Club was one of many nonprofit entities that Mike gave his time to over the years, including chairing the Twin Cities United Way.

I came to Mike for support multiple times in the early 1980s on behalf of a nonprofit organization I worked for that sponsored the Minnesota High School All-Star Football Game as a fundraiser. Mike twice accepted the volunteer role as general chair for the game and made Supervalu a generous annual supporter. Not only that but he enlisted the financial support of other Twin Cities business leaders. 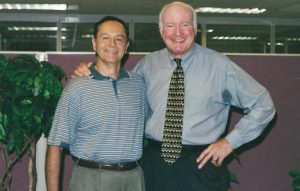 At Supervalu with Mike.

As chief executive officer, Mike led grocery wholesaler Supervalu to great success before retiring almost 20 years ago. A strong but humble leader, he was much admired inside and outside the organization. Those leadership skills were tested and developed playing tackle for the Gophers during trying times. Minnesota had losing records in all three of his seasons on the varsity.

As a sophomore, Mike played on the 1957 team that was a preseason top 10 choice in the national rankings, and a favorite to win the Big Ten championship. A conference title would send the Gophers to their first ever Rose Bowl. The Gophers won their first three games as a top-five ranked team but then stumbled, winning only once more and finishing with a 4-5 season record. The team was beset by injuries and lacked team speed.

The next two seasons, 1958 and 1959, Minnesota won a combined three games. Fans were more than cranky, with some crackpots throwing garbage on the Edina lawn of head coach Murray Warmath. On fraternity row, the coach was hung in effigy. A 1959 story surfaced in a Minneapolis newspaper reporting that downtown businessmen wanted to buy up the remaining years of Warmath’s contract.

In a book about Warmath’s career, The Autumn Warrior by Mike Wilkinson, Wright recalled receiving a note from the coach’s wife after a 33-0 loss to bitter rival Iowa in the fall of 1959. “She wrote to me saying coach Warmath was so down after the Iowa loss that he was mumbling about maybe resigning,” Wright said in the book.

But Warmath carried on and that was a leadership lesson for Wright who played with a young team full of promise in 1959 that just made too many mistakes. “I felt the team would be a good one the next year,” Wright said in the The Autumn Warrior.

Indeed. The Gophers went from a 2-7 record in Mike’s last season to a Big Ten title and national championship the next year. He was recognized as Academic All-Big Ten in 1959 but more importantly his leadership as captain contributed to the culture that would see the Gophers go 22-6-1 the next three seasons.

Warmath had a career record of 87-78-7 as Minnesota’s head coach. Hired in 1954, he was a controversial choice for a program that had won five national championships from 1934 through 1941. The people’s choice to take over in the 1950s was Minneapolis native and former Gopher lineman Bud Wilkinson who had turned Oklahoma into a powerhouse as head coach.

However, there was an anti-Wilkinson attitude within the University during that era. Mike told me that in the 1950s administrators and academics at the U didn’t want football to be too prominent. Warmath, considered a good coach already proven at Mississippi State, was a preferred choice to Wilkinson who had the potential to become a god with the state’s citizens. The Gophers might have turned into the kings of college football with Wilkinson’s high football IQ and recruiting charms that extended into talent-rich Texas.

After Warmath was forced out following the 1971 season, the Gophers struggled until Lou Holtz was hired in 1984. Holtz stayed only two seasons and left for Notre Dame where he became a legendary coach. I remember calling Mike when rumors swirled about Holtz leaving Minnesota. Ever the optimist, Mike asserted that Notre Dame didn’t allow redshirting of its players and that obstacle might factor into Holtz’s decision of whether to stay at Minnesota.

Mike yearned to see the Gophers succeed in football and even served on a search committee to fill a vacancy at Minnesota back in the days when LaVell Edwards of BYU was turning that school into a power. Mike said despite the U program being down, Edwards was interested in becoming head coach at Minnesota but that never materialized.

Something else that didn’t come about was a mutual interest I once had in going to work for Supervalu. The company had a communications opening and Mike thought enough of me to have a department head arrange a long interview process. Lengthy is an understatement because one day I spent about eight hours going through a series of tests and interviews. Talk about corporate America!

I certainly don’t blame Mike for not receiving the job offer because that wasn’t his call. The one thing I should have needled him about is deserting his south Minneapolis home to attend St. Thomas Military Academy instead of attending my beloved Washburn High School. The mighty Millers of the 1950s would have been even greater with Mike on the roster.

Mike’s many honors and awards (I could fill a long paragraph) included receiving the University of Minnesota’s Outstanding Achievement Award and membership in the school’s hall of fame for athletics. I know that if I asked Mike about his life, including those awards, he would offer a humble answer and deflect praise to others.

Mike, thank you for being part of my life.