How impressive is the North Dakota State football program that has won seven FCS national titles in eight years and is riding a 25-game win streak? Impressive enough to earn the praise and admiration of former University of Minnesota head coach Jerry Kill who has coached at both the FBS (Division I-A) and FCS (Division I-AA) levels.

Kill spent much of his head coaching career at the FCS level including seven seasons at Southern Illinois. In his last five years, from 2003-2007, the Salukis were 50-14 and made five consecutive FCS playoff appearances. Although Kill went back into coaching last week as an assistant at Virginia Tech, he was recently the athletic director at Southern Illinois where the Salukis and the other teams in the Missouri Valley Conference annually try to figure out a way to compete with the Bison, who several years ago had a 33-game win streak.

In Kill’s first season as Minnesota coach in 2011, NDSU defeated the Gophers 37-24 in Minneapolis. The coach saw talent he envied and knew those players could compete in the Big Ten. “There were about five of them, six of them—when we played them—I ’d have taken in a heartbeat,” Kill said in a telephone interview. “Shoot, the year we played them I might have taken the whole damn team.”

The Gophers haven’t played the Bison since 2011 but did take on another Valley power in their opening game on August 29 in Minneapolis. No. 4 ranked South Dakota State gave Minnesota fits before losing 28-21 in the fourth quarter.

Kill was asked how the Bison might perform playing in the Big Ten.

“Jumping from that league and jumping all the way to the Big Ten is a huge jump,” Kill said. “(But) North Dakota State is a Division I (FBS) program.”

College football authorities raise the question of whether an FCS power like NDSU has enough quality depth to survive the physical pounding of a nine-game schedule in a conference like the Big Ten. “I don’t know,” Kill said. “I am not ever going to say North Dakota State can’t do anything because they beat K-State. They beat Minnesota when I was there. Shoot, they beat just about everybody they played.”

That’s for sure. Power Five Conference teams think twice about playing NDSU after the Bison have defeated Iowa, Kansas State and Minnesota (also in 2007) on their home fields. No wonder Bison fans have circled dates on future calendars when their team plays at Oregon next year and visits Arizona in 2022.

The Bison’s phenomenal success (not even duplicated by Alabama or Clemson on the FBS level) is built on shrewd recruiting and player development. NDSU benefits (as do North Dakota, SDSU and South Dakota) from there being no FBS programs in the Dakotas, and one FBS program in Minnesota. The Bison roster this season lists 36 Minnesotans including new star quarterback, Trey Lance.

“I think it started with (coach) Craig Bohl,” Kill said about the success in recruiting Minnesota. “Craig Bohl was real good at taking those in between kids that may not be quite ready to be in a Power Five (program). They did a great job of developing players.”

Bohl left for Wyoming after the 2013 regular season. His successor, Chris Klieman, departed for Kansas State following last January’s seventh national title. But the program rolls on under new head coach Matt Entz, with the latest triumph last Saturday’s 27-16 win over No. 4 national ranked UC Davis. The week prior the Bison played on the road at No. 18 Delaware and won 47-22.

The Bison and South Dakota State have byes this week before starting Missouri Valley schedules October 5. After the Minnesota loss, SDSU has won games by scores of 38-7, 38-10 and 43-7. The Bison and Jackrabbits play October 26 in Brookings. Call it a Valley showdown or matchup of two teams that could play in a FBS league like the Mid-American Conference, or just know it will be a special football game.

Kill said he missed football when I asked him earlier this month how he was doing. Then came last week’s announcement he joined the Virginia Tech staff as an assistant coach and gave up the AD position at Southern Illinois. 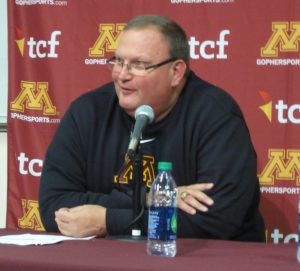 Tracy Claeys, Kill’s defensive coordinator at Minnesota, is one of the best defensive minds in the country but he must be having nightmares after UCLA’s 67-63 win last Saturday over Washington State, the program whose defense he leads now.

Are the Purdue Boilermakers, who host the Gophers Saturday, overdue for a rebound? Dating back to the end of last season, Purdue has lost five of its last seven games. Minnesota has won six of its last seven.

The Vikings’ Dalvin Cook is the fifth player in NFL history with at least 110 rushing yards in each of his team’s first three games of a season. The others are Pro Football Hall of Famers Jim Brown, Curtin Martin, O.J. Simpson and Emmitt Smith.

Los Angeles Stadium at Hollywood Park will cost about $5 billion and have a transparent plastic roof like that on U.S. Bank Stadium. The new privately funded facility opens next season as the home of the Chargers and Rams. U.S. Bank Stadium, a public-private partnership, opened in 2016 at a cost of $1.1 billion.

The Twins will finish about in the middle for home attendance among the 30 MLB clubs when all regular season schedules end next weekend. Per figures from Espn.com, the Los Angeles Dodgers will lead all franchises in attendance averaging 49,075 per game. The Miami Marlins, having finished their home dates like the Dodgers and Twins, averaged a pathetic 10,016.