Enjoy a Tuesday notes column leading off with the Minnesota Twins, a club that seems certain to have multiple representatives in July’s MLB All-Star Game in Cleveland.

Twins starters Jose Berrios, Jake Odorizzi and Martin Perez have all won seven games, a total exceeded by only two pitchers in the American League, per stats from Baseball-reference.com. Odorizzi leads the AL in ERA at 2.16 ERA. Berrios was the team’s lone All-Star a year ago and that won’t hurt his chances of being on the AL team in 2019. Perez won only two games last season pitching for the Texas Rangers and is a Comeback Player of the Year candidate.

Minnesota shortstop Jorge Polanco and outfielder Eddie Rosario have compiled All-Star credentials this spring, too. Polanco’s .332 batting average is second best in the American League. He is tied for third in Wins About Replacement. Rosario leads the league in RBI with 45 and his 16 home runs are tied for second.

The Twins haven’t had more than three players in the All-Star Game since 1991 when Rick Aguilera, Scott Erickson, Jack Morris and Kirby Puckett represented Minnesota.

The Twins announced this morning that pitcher Michael Pineda is on the 10-day Injured List with right knee tendinitis. Pineda has started 11 games, with a 4-3 record and 5.34 ERA. To replace Pineda on the roster, the Twins selected the contract of left-handed pitcher Devin Smeltzer from Triple-A Rochester. Smeltzer made four starts for the Red Wings, going 0-1 with a 1.82 ERA. He was acquired last season as part of a trade with the Dodgers.

The Twins have three more games remaining in May and have won 19 games this month. The club record for wins in May is 21. The most Minnesota has won in any month since 2017 is 20 in August of that year.

Minnesota’s 36-17 record remains the best in MLB after last night’s 5-4 loss to Milwaukee.

As the Minnesota Vikings go through Organized Team Activities this spring it appears No. 1 draft choice Garrett Bradbury will be the center, although he is learning the guard positions, too. The presence of Bradbury is prompting the move of last year’s starting center, Pat Elflein, to left guard.

What was Elflein’s reaction on draft night to the Vikings selecting the talented Bradbury who played at North Carolina State? Excited, he said, to add another “great lineman” to the roster.

Elflein is taking a team first approach about moving to guard, a position he played in college at Ohio State. “I think we have really athletic offensive linemen all across the board, so however we can utilize that best is what we want to do,” he said.

Elflein likes what he has seen so far of Bradbury. “He’s smart. He’s learning the offense very quickly.” 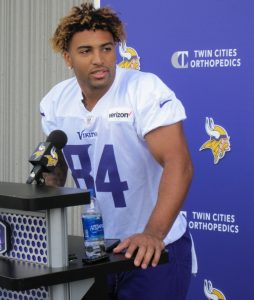 Rookie tight end and No. 2 draft choice Irv Smith Jr. is impressed with the Vikings’ offense. “It’s going to be a scary (good) offense,” he said.

Vikings wide receiver Adam Thielen is a two-handicapper in golf. After his pro football career might he consider a run at pro golf? Probably not, he told Sports Headliners. “I wish I was good enough,” he said. “I love the game of golf and it would be really cool to be able to do something like that, but I am not even thinking about that right now.”

Football fans in Minnesota will like the 2019 Division II and III preseason national rankings by Street & Smith’s College Football magazine on newsstands now. Minnesota State is No. 3 and Minnesota-Duluth No. 11 in the D-II rankings. Three MIAC teams are in the D-III top 10 with No. 3 Saint John’s, No. 6 St. Thomas and No. 10 Bethel.

St. Thomas games will again be broadcast on WCCO Radio. Sources believe the school will continue to buy the air time for the broadcasts.

Deepest condolences to the family and friends of Mignette Najarian who passed away last week. The Najarians, including Mignette’s husband Dr. John Najarian of the University of Minnesota, have for decades been one of the great families in Minneapolis and Minnesota. They have inspired people through medicine, business and philanthropy.

The “Cinderella” Golden Gophers softball team, in the program’s first ever Women’s College World Series, are seeded No. 7 among eight teams and play No. 2 UCLA starting at 1:30 p.m. Thursday in a game to be televised by ESPN. Names to watch on the Bruins include pitcher Rachel Garcia with a 1.01 ERA, third lowest in the country, and Kelli Goodwin hitting .446, ninth best.

No. 1 seeded Oklahoma should be the crowd favorite with the May 30-June 5 tournament being played in Oklahoma City, located about 20 miles from the OU campus in Norman. The talented Sooners lead the nation’s D-I teams in batting average at .355 and also ERA at 1:06. The Gophers rank No. 7 in ERA at 1.63 but aren’t in the top 10 for batting average.

Season tickets are sold out for Gopher softball 2020 home games and the athletic department has started a waitlist.

The Gophers baseball team finished the year with a 29-27 overall record, the 36th time in 38 years that head coach John Anderson has led Minnesota to a winning record. Anderson’s 64th birthday was earlier this month and he has one year remaining on his contract. He should be given a contract extension to continue leading the program indefinitely.

Earlier this month on CBS an estimated 10,000 TV households in the Minneapolis-St. Paul market watched golf’s Nick Faldo, along with Minneapolis philanthropist Wayne Kostroski, announce the first-ever Taste Fore The Tour. The Tour’s first stop will be July 1 at Interlachen Country Club in Edina, and is part of a national charity culinary series created to raise awareness and donations for hunger relief causes. The Minnesota culinary event will precede the PGA’s 3M Open that starts July 4 in Blaine.