Tiger Could Be in Future 3M Open

Tiger Woods declined to participate in the inaugural 3M Open that ends today at TPC Twin Cities in Blaine. Will he play here in future years?

John Harris, the former University of Minnesota golfer who is now seen occasionally on the PGA Tour Champions for seniors, believes so. Harris, 67, is a friend of the legendary Woods who has won 15 majors including the 2019 Masters. Harris has provided assistance this year to Hollis Cavner, whose tournament management company has a seven-year commitment from the PGA to make Minnesota an annual tour stop.

Woods hasn’t played in a tournament since the U.S. Open ended June 16. Harris told Sports Headliners it is important to Woods to spend time with his two children in early July. Although there has been no announcement, there is speculation the 3M Open’s future dates will be later in the summer than this year. Harris said Cavner offered ideas to Woods about how he could show the kids a memorable time including summer camp and being entertained at the Mall of America.

“He (Cavner) had promised Tiger that his kids would have the greatest week of the summer right here in Minnesota,” Harris said. “So unfortunately, it didn’t work this year but I am convinced he will be here before the 3M run is over.”

Woods would have maximized interest and attendance at the first 3M Open. Did Cavner come close in securing participation by golf’s biggest name? ” Very, very close,” Harris claimed. “And you know what? I think that if Tiger was going to play at any time between the U.S. Open and the British Open it would have been in Minneapolis.”

The British Open will be played July 18-21 at Portrush Golf Club in Northern Ireland. Much of the golf world’s eyes will, as usual, be on Woods. “He is single-handedly carrying the game right now,” Harris said. “You know what? It’s not really fair but that’s the way it is, and he can’t play every week. He’s gotta protect his body. I think his priorities are still the majors and the world events. He has not been to Portrush, so going to Portrush and preparing for this British Open is high on his list right now.”

Woods is 43 years old and his win at the Masters was his first majors championship in 11 years, brining his career total to 15. As even casual golf fans know, he is chasing Jack Nicklaus’ majors record of 18 titles.

“He played hard before the Masters and I think there is a tremendous let down after winning the Masters (in April),” Harris said. “I think his body kind of shut down a little bit, and he needs to re-energize and get himself ready to go. I think he views this Portrush golf course as a real opportunity to win a major.”

Harris is a native of Roseau, and like other Minnesotans, he obviously wishes Woods was here for the 3M Open. He talked about how Woods “would bring a lot of people to the gate” (and help his friend Cavner). “…He makes every event go from great to a huge success,” Harris said. “I think he wanted to be here and he will come at some point over the course of this event.”

In 1993 Harris won the U.S. Amateur Championship at age 41. Woods won the next three amateurs. The two also played together on a U.S. Walker Cup team. Harris has played in three PGA Tour Champions events this year and is likely to play in more. 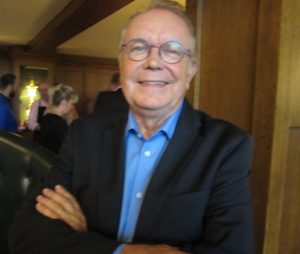 VEAP is efficient at feeding the hungry and Kostroski, the Minneapolis philanthropist who led last week’s fundraiser along with his son Pete Kostroski and golf’s Sir Nick Faldo, said the organization can make $20 create 120 meals. A short-term goal now is to raise $30,000 from the public who can make donations via the link TasteForeTheTour.com (see Tee Off Against Hunger).

At Interlachen guests enjoyed food prepared by celebrity chefs including Andrew Zimmern of Travel Channel fame, and chatted up well-known Minnesota sports figures such as Joe Mauer, Rick Spielman, Paul Molitor, Jason Zucker and P.J. Fleck. They were all in good spirits Monday night because of the cause.

“When you’re here in the United States, no one should ever go hungry with all the resources and everything we have here,” said Spielman, the Vikings general manager. “So to come out here…to promote that is something that is very important.”

Helping the needy has been on Wayne Kostroski’s mind for a long time. His mom set an example when he was a child, loading up a bag of food and sending it to a church or local food bank. “Every good fiber in my body is from my mom,” he said.

Back in the 1980s Kostroski started sending chefs from his Minneapolis restaurants to charity events. He realized there are so many individuals who would never be restaurant customers at his restaurants but needed help. “They’re struggling just to get their next meal,” he said.

That’s why in the early 1990s Kostroski started the annual Taste of the NFL fundraisers responsible for providing over 200 million meals for the hungry. With one in six Americans going hungry, Kostroski said, there is certainly a need for events like Taste of the NFL and Taste Fore the Tour, the initiative that successfully launched several days ago. “This is Minnesota great,” he said of the event’s premiere.