Twins rookie Luis Arraez has been turning heads since being called up from AAA Rochester last spring, and among those impressed is Tony Oliva who had one of the greatest MLB seasons ever for a first-year player.

In 1964 the Twins right fielder hit .328 and became the first rookie in modern history to win a batting title. He topped the American League in hits, runs and doubles. He also totaled 374 total bases, tying the record set by Hal Trosky in 1934 for most total bases by a first-year big leaguer.

Oliva, who left Cuba in the early 1960s to begin his professional baseball journey, is now an 81-year-old hitting instructor for the Twins. He is in the clubhouse for each home game and has become acquainted with the 22-year-old Arraez who is hitting .348 after 59 games in the big leagues. In the minors the Venezuelan infielder-outfielder had a .331 average through parts of six seasons, per Baseball-reference.com.

That kind of success in the minors somewhat prepared Oliva for Arraez’s hot hitting this spring and summer in the big leagues. “I am not surprised that he is hitting (so well) because he be hitting very good every single year while he was in the minor leagues,” Oliva told Sports Headliners. “But I get a little surprised…that he is doing so well, he got so much…confidence. He is a very tough out. He hits to the whole field. He doesn’t strike out too often. Ninety-nine percent of the time he swing (at) a strike.” 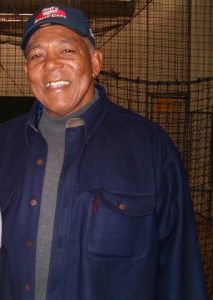 Arraez is a left-handed hitter, like Oliva was, and if he can maintain his batting average he will remain a candidate for American League Rookie of the Year. With 231 plate appearances so far, Arraez won’t have enough to qualify this season for the league batting championship (502 required).

Arraez’s discipline at the plate is impressive, particularly for such a young player. His bat control allows him to hit a balanced number of baseballs to left, center and right field. The way he sprays the ball to all fields is reminiscent of another Twins great, left-handed hitting second baseman and National Baseball Hall of Famer Rod Carew who won seven AL batting titles.

Arraez has played mostly second base for the Twins but has contributed to the roster’s versatility by also taking assignments at shortstop, third base and left field. He has committed only four errors this season. It seems all but certain the Twins will let 27-year-old second baseman Jonathan Schoop go in the offseason and make Arraez the regular at the position in 2020. Schoop has just a one-year deal with Minnesota.

With Arraez having played in so few games with the Twins, Oliva isn’t ready to go overboard on the newcomer. “It’s easy to get here, but it’s very hard to stay here,” Oliva said. “He could stay here for a long time.”

But Arraez is definitely in good company so far during his brief MLB career. Just last week Twins media specialist Dustin Morse Tweeted that Arraez’s 66 hits in his first 55 games placed him fourth among club rookies dating back to 1961—behind Kirby Puckett at 81, Oliva, 71 and Carew, 70.

The Twins, who lead the second place Indians by two games, have a favorable schedule the remainder of this month, facing only the While Sox and Tigers who have a combined record of 93 wins, 153 losses. The Indians, by contrast, have a schedule that includes two games against the 73-53 Rays and a series against the above .500 Mets, while playing all their remaining August dates on the road except for a series against the Royals. The Twins have two series at home, two on the road.

The first 10,000 fans in attendance for Saturday’s Twins home game against the Tigers receives the third in a set of four commemorative Joe Mauer bobbleheads. The collectible features Mauer with his 2009 American League MVP, Gold Glove and Silver Slugger awards.

A hockey source predicted the Minnesota Wild will announce its new general manager this week, perhaps today. He also told Sports Headliners star defenseman Ryan Suter is among those who owner Craig Leipold has sought input from.

Vikings wide receiver Adam Thielen talking about the time needed to develop chemistry between a quarterback and his receivers: “It takes a long time to get on the same page as the quarterback because there are so many different situations. … You are always still working on it, but it is definitely better to be in a second year with a quarterback (Kirk Cousins) than a first year.”

Cousins has talked with Vikings legend Fran Tarkenton who despite being a highlight reel scrambling quarterback admits to running a 4.9 40-yard dash, a time slower than run now by some NFL offensive linemen.

No fun to write this but fan apathy must be dramatic for the Gophers to announce $10 tickets going on sale later this week for the home opener with South Dakota State.