As of last week, the University of Minnesota reported 6,738 public season tickets had been sold for men’s basketball. That total for the 2019-2020 home schedule compares with 6,647 sold last season, according to information provided to Sports Headliners.

Minnesota finished with a 9-11 regular season record last winter but had an entertaining team that won two games in the Big Ten Tournament and later advanced to the NCAA Tournament where the Gophers upset higher seeded Louisville. Amir Coffey, Minnesota’s best player down the stretch, opted to turn professional in the spring rather than return for his senior year. His decision lessened optimism for this season and almost certainly negatively impacted new season ticket sales.

With Coffey the Gophers would have been projected as an upper division or perhaps title contender in preseason Big Ten media forecasts. The U renewed almost 93 percent of its season tickets, and sold 565 new public season tickets.

U marketers have been proactive in pricing and packaging including offering Mini Plan tickets. Season ticket prices start at $340, while six-game Mini Plans begin at $70. A total of 1,914 Mini Plan tickets have been sold. The Gophers will play 17 home games, with 10 of them against Big Ten opponents.

Interest in Gophers basketball has sharply declined from what it was in the 1980s and 1990s when packed houses were common and season ticket totals were thousands higher than today. The best season attendance average Minnesota had in the last four seasons was 12,133 for the 2014-2015 schedule. The Gophers averaged 11,850 last season and the two seasons before had averages of 10,309 and 10,791. Williams Arena seating capacity is 14,625.

The Gophers play their first Big Ten home game next Sunday against No. 3 ranked Ohio State, one of the early season surprises in a league that can make a case for being the best in the nation. Based on information from the U last week, the Michigan State game at Williams Arena January 26 has the best presale with a total of 9,826 tickets committed.

The Gophers are 0-1 in the Big Ten after last night’s loss at Iowa and have a 4-5 overall record. Their 72-52 Iowa loss was an embarrassing performance highlighted by not hustling on transition defense, poor shooting by Minnesota’s three starting guards (made three of 29 field goals) and turnovers (center Daniel Otruru had at least five travelling violations and eight total turnovers). A popular preseason prediction for the Gophers before the season was a 10th place Big Ten finish and right now it looks accurate.

After last night’s Big Ten season opener, Minnesota head coach Richard Pitino has a 40-71 record in league games. Pitino is in his seventh season at Minnesota.

3rd Anniversary Herbie’s On The Park

Three years ago this month Minnesota Wild owner Craig Leipold opened a restaurant in the historic Minnesota Club, at 317 Washington Street in St. Paul. “The motivation” was to provide hockey fans and others attending events at adjacent Xcel Energy Center a convenient and appealing place to stop by for food and beverages.

What is the financial bottom line at Herbie’s On The Park? “We don’t lose money,” Leipold told Sports Headliners. “We make a little bit every year.” 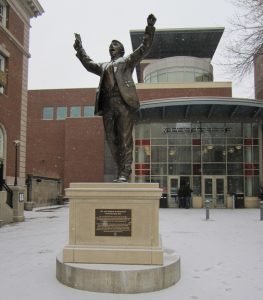 There is nearby competition from places like Pazzaluna and the St. Paul Grill but the restaurant named after legendary coach and St. Paul native Herb Brooks has a built- in customer base and hockey niche. Brooks, who coached the hockey Gophers to three national championships and the 1980 U.S. Olympic team’s Miracle on Ice, died in 2003 but his brother Dave Brooks owns the building that overlooks Rice Park and provides offices to the Wild.  A Herb Brooks statue is near the restaurant’s front door.

Leipold said the food is outstanding, and the ambiance “is just so fantastic,” partly because of the building’s history and warm tavern feeling. What are his beverage and entrée favorites?

“I love Uncle Nearest, it’s a great whiskey,” Leipold said. “The pork chop is tremendous, and the squid ink pasta is one of the best pastas I’ve ever had.”

The Wild recently announced five-game flex packs are now available for purchase for the remainder of the 2019-20 season. Fans can purchase tickets in the upper, lower and club levels starting at $64 per game for any five remaining home games.

Starting with a game at Xcel Energy Center tonight against the Anaheim Ducks, the Wild has its first three-game homestand of the season this week. The Edmonton Oilers visit on Thursday with the Philadelphia Flyers in town Saturday.

Minnesota has a seven game homestand January 16-February 6. That ties the record for second longest in franchise history.