Spend time around the Vikings this offseason and it doesn’t take long to pick up on expectations for an improved record in 2019. The Vikings were 8-7-1 last year and the whole organization is determined to have better results this fall.

An easy way to describe the club’s new attitude is “chip on the shoulder.” Reserve quarterback Sean Mannion, a third round draft choice by the Rams in 2015, signed with the Vikings in April and although new to the organization noticed the mindset of his new team.

“I think that would be an accurate way to describe it, for sure,” Mannion told Sports Headliners. “The big thing is just channeling that and focusing on your craft. Using that as motivation but not letting it become destructive. Letting it be something that motivates you to work on your skills, work on your abilities, and just continuing to grow as a player.” 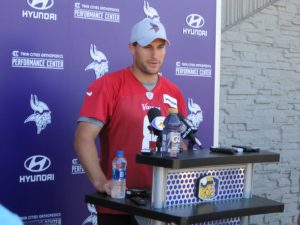 After the Vikings finished spring practices, new assistant head coach Gary Kubiak acknowledged the determination starting quarterback Kirk Cousins has expressed to him. “That’s one of the first things that he said to me when we talked back a few months ago when I got here. He said, ‘Coach, I’ve had some good things happen in my career, and had some good numbers, but I want to win.’

“And that’s what we all want to do,” Kubiak said. “That’s what you’re searching for with your football team, and if you got people thinking that way, you got a chance to get there. …”

Even head coach Mike Zimmer, often a curmudgeon with his team and media, has expressed optimism about the Vikings having the potential for a big season. “I definitely picked up on that (optimism),” Mannion said.

The national perspective on the Vikings when they go through training camp in August likely will be that Minnesota is picked for second in the NFC North Division behind the Bears, last season’s champions. NFL Network reporter Tom Pelissero told Sports Headliners “they (the Bears) come in as the favorites.”

The biggest question about the Vikings, per Pelissero, is just how fast the offense will come together. “It’s all about marrying the run and the pass,” he said. “Making those two things look the same (to defenses).”

Pelissero, who lives in the Minneapolis area, said the offense has “got the weapons” and will feature more play-action and bootlegs to make Cousins more effective in his second season with the Vikings. Cousins will need help, though, from a reshuffled offensive line that last season was subpar.

“Average (for the line) would be an improvement from where they were a year ago, frankly,” Pelissero said.  “I am sure they are shooting for higher than average, but average would be workable from where they’re at.”

The first of 16 training camp practices open to the public at Twin Cities Orthopedics Performance Center in Eagan will be July 26. New this year is a policy that autographs will be available only to fans 18 and younger.

Sports Illustrated’s Jeremy Wood gave the Timberwolves an A grade for drafting Texas Tech shooting guard Jarrett Culver who is considered a skilled offensive and defensive player. Writing last Thursday on SI.com Woo said, “This is strong value for Minnesota at No. 6 landing a player who you can argue for as the third best prospect in the draft.”

Did you notice Indiana’s Romeo Langford was the only Big Ten Conference player among the 15 lottery choices in last Thursday’s NBA Draft?

University of St. Thomas athletics director Phil Esten told Sports Headliners the school is in the early stages of “sorting all our options” regarding whether it will continue to compete in Division III, move to Division II or possibly make an eventual transition to Division I. The D-1 level requires a lengthy process and timeline including starting at D-2.

The Tommies must leave the D-3 MIAC after next spring. It’s way down the road speculation but if St. Thomas decided to pursue D-1 status for its athletics program, Allianz Field and Xcel Energy Center could be attractive homes for the Tommies football and basketball teams.

In this glutted sports market, the Tommies would be challenged to draw large crowds in both sports, but more so in football. With a capacity of about 20,000 at Allianz, St. Thomas football could attract larger crowds than some struggling D-1 programs have done over the years. For example, Akron, from the MAC, had average home attendance of 9,170 in 2014, per multiple reports.

With the high quality basketball played in the state, the Tommies could become competitive after a few years at the D-2 or D-1 levels. Men’s coach John Tauer is highly thought of and is capable of taking the Tommies beyond D-3 success that includes the 2016 NCAA title.

Tommies games at the Xcel Energy Center against regional and national teams with brand recognition might attract crowds of 10,000 or more. Ideal box office draws would include Notre Dame and Marquette.

Fan HQ is promoting the sale of Joe Mauer number retirement baseballs, with online ordering and then pickup at the Ridgedale store.

Bill Robertson, commissioner of the Twin Cities-based WCHA, was pleased that two league alums, David Backes and Colton Parayko, played for the Bruins and Blues respectively in the Stanley Cup Finals. Backes is from Minnesota State, while Parayko is an Alaska Fairbanks alum.

Congratulations to tennis achievers Hugh Cutler, Larry Sundby, and Tom and Tim Wynne, on their induction into the USTA Northern Section Hall of Fame. USTA Northern, based in Bloomington, is a nonprofit and one of 17 sections of the United States Tennis Association that is dedicated to the growth and development of tennis.