I have watched each of the 21 bowl games in University of Minnesota football history. The two most significant are the 1962 Rose Bowl and yesterday’s Outback Bowl.

In January of 1962 the Gophers returned to the Rose Bowl after losing the year before to Washington, 17-7. In the 1961 Rose Bowl Minnesota played a stagnant first half and was outscored 17-0 by the Huskies. Coach Murray Warmath vowed to change things upon the return to Pasadena, including having the Gophers stay in a monastery, rather than a posh southern California hotel.

The result of shaking things up? A 21-3 dominating win over UCLA that left Minnesota ranked No. 6 in the two final wire service polls. The victory was significant for more than revenge. It demonstrated the Gophers, who won Big Ten and national titles the previous season, were still a national power and would be again in 1962 when they came within a negligent referee’s penalty of winning the conference title and earning a third straight Rose Bowl invitation.

The significance of Minnesota’s authoritative 31-24 win over Auburn yesterday? It offers more compelling evidence that head coach P.J. Fleck, his staff, and players, have turned the program from decades of failure and mediocrity to high level success.

In the Outback Bowl the 10-2 Gophers were about a touchdown underdog against a 9-3 Auburn team that had competed with some of the nation’s best teams, and boasted a win over powerhouse Alabama and a narrow loss to No. 1 ranked LSU. Before the game Minnesota fans were more concerned about not seeing their favorites get embarrassed, than winning the Outback Bowl. 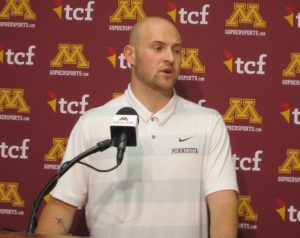 Quarterback Tanner Morgan threw an early interception but the Gophers didn’t cave and held the Tigers to a field goal. Overcoming adversity has been a characteristic of this team that with a final 11-2 record won the most games since the 1904 squad went 13-0. The Outback victory over No. 12 ranked Auburn was the program’s 13th in the last 17 games dating back to the close of 2018.

This fall, in Fleck’s third season, Minnesota was 7-2 in Big Ten games. That’s the most conference victories in school history, and the Gophers tied Wisconsin for the best record in the West Division. Among the milestones, and indicators the program has taken a decided change in direction, was Minnesota’s upset of No. 5 ranked Penn State in front of a delirious home crowd in November.

Minnesota was able to win yesterday despite playing without key injured personnel including linebacker Kamal Martin, right tackle Daniel Faalele and tight end Jake Paulson. The loss of Faalele was particularly significant given the lack of depth on the offensive line. The offense, though, dominated the game in time of possession and made big plays both running and passing including a superb 12 catches, 204 yards performance by wide receiver Tyler Johnson.

Scott Studwell, who retired last year after spending decades in college scouting for the Vikings, watched the Outback Bowl and described the win as a “big moment for the program.” The former Illinois and Viking star linebacker has watched the Gophers for years, and he sees how the program has improved. He believes things seem in place for Minnesota to be a “consistent contender” in the Big Ten going forward.

“They’re bigger, they’re more physical, (and) they’re more athletic than they have been,” Studwell told Sports Headliners by telephone this morning. “I mean the future is certainly very bright. P.J. has done a hell of a job getting the kind of people into the program that he wants.”

Except for losing starting seniors Johnson and running back Rodney Smith, the Gophers will have all their offensive regulars returning. Minnesota will lose several top players on defense but coordinator Joe Rossi is one of Fleck’s best assistants and the Gophers should be okay next fall. Having Morgan, one of the Big Ten’s elite quarterbacks return, along with the other offensive pieces, is all but certain to help earn Minnesota at least a top 20 preseason national ranking next summer. Minnesota will also be labeled a favorite in the race to win the 2020 Big Ten West.

The Gophers were ranked No. 18 in the College Football Playoff rankings going into yesterday’s game. Any polls that come out in the next several days will have Minnesota among the nation’s top 15. The Gophers haven’t been in that kind of company at year’s-end since 1967 when UPI poll had them No. 14.

What’s Studwell’s evaluation of hometown favorite Johnson regarding his NFL draft future? Studwell, who used to spend about 250 days annually evaluating college talent, finds a lot to like about the 6-foot-2, 205-pound Johnson including his length, hands, toughness and ability to step up in big moments like yesterday when he had two touchdown receptions.

“The only underlying question is how fast is he going to run,” said Studwell, who predicted it’s more likely Johnson will be drafted rather than go to an NFL camp as a free agent.

The SuperDome, among the loudest stadiums in the NFL and the site of Sunday’s Vikings-Saints playoff game, opened in 1975 and at the time was considered an architectural marvel. The facility is the only surviving covered stadium in the NFL among those built in the 1970s and 1980s including the Metrodome.

Vikings coach Mike Zimmer is a proven defensive authority who is often able to confuse opponents, but he will see his team match wits Sunday with soon-to-be 41-year-old Saints quarterback Drew Brees. “It’s hard to trick him because he reads things so quickly,” Zimmer said.

Murray Warmath, the only Rose Bowl coach in Gophers history, would have turned 107 last week if still alive. Mike Wilkinson, who wrote Warmath’s book The Autumn Warrior, celebrated his 76th birthday on Monday.

LeBron James, who turned 35 Monday, is on record as wanting to play one day in the NBA with son Bronny, the southern California high school star coming to Minneapolis for the nationally televised game Saturday against Minnehaha Academy.

CBSSports.com is reporting this morning the Twins, Braves and Nationals have made four-year offers to high profile third baseman Josh Donaldson, considered the top free agent remaining in MLB.