Enjoy a Thursday notes column with a focus on Minnesota’s professional basketball franchises.

For many observers the Minnesota Timberwolves player to watch in preseason and beyond this fall will be enigmatic 24-year-old forward-guard Andrew Wiggins. The franchise opens training camp October 1, and in this town the five-year veteran’s name is synonymous with unfulfilled potential.

So flashy his nicknames have included Junior Jordan, Wiggins can prompt gasps from spectators because of his athleticism. He has a career scoring average of 19.4 and that is exceptional by NBA standards. The rest of his stat line, though, is pretty blah and his numbers in categories like assists (2.2 per game) and rebounding (4.3) hint at Wiggins not being a player who makes teammates more productive. His many critics see a high potential player who lacks the focus and intensity to be a star on both offense and defense.

Waiting on Wiggins to consistently perform at a high level seems like part of the franchise DNA. This season he gets a fresh start with new instructors, a revised coaching staff led by Ryan Saunders in his first full season as head coach. Directing from the top is Gersson Rosas, the new president of basketball operations.

How Wiggins prepared for this season may provide a clue as to things could go in the coming months. Team owner Glen Taylor told Sports Headliners he likes the approach of Wiggins who he rewarded with a five-year contract in 2017 that reportedly approaches $150 million. He said Wiggins has invested more effort this offseason than in at least a couple of years.

“Everything has really been positive,” Taylor said. “He’s stayed around (Minneapolis and) worked. Done everything we’ve asked him to do. He’s working on the things that we thought were important.

“If he has a tough year (in 2020), or a good year…he has put in the effort. That was the first big step. If he didn’t put in the effort we would really be concerned. Now we’ve gotta see, does that effort translate into results?”

When Rosas was hired last spring many Wolves fans assumed general manager Scott Layden would move on. Layden had been hired by Tom Thibodeau in 2016 when he took over as president of basketball operations and head coach. Speculation was Layden might leave, or be asked to exit, months after Thibodeau’s firing in January of this year.

After hiring Rosas, Taylor told him that Layden was under contract and to decide about his future. Rosas said he had worked with Layden in the past and respected him. “He said, ‘I got no reason to push him out. If he finds another job, if he wants to do something else he thinks would be better, I am okay with that, too.’ “

Layden remains with the Wolves with responsibilities that include evaluating personnel. 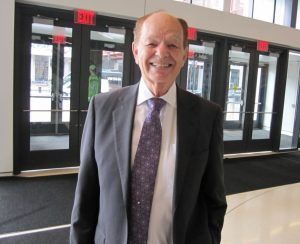 The Wolves will train in Taylor’s hometown of Mankato for the first time since 2014. Taylor’s wife Becky will prepare a lasagna dinner and the two will host a team party at their home for players and staff.

Although most media who cover the NBA don’t predict a spot in the playoffs for the Wolves, Taylor is upbeat because of new leadership with Rosas and Saunders, and promising young players like rookie guard Jarrett Culver joining Karl-Anthony Towns, one of the league’s premier centers.

Taylor was elated over the 2019 regular season performance of his other basketball franchise, the WNBA Lynx. Despite a roster reshuffle after losing star players following the 2018 season, the team made the playoffs.

The Lynx are four-time WNBA champions, with the last title coming in 2017. During the past offseason, coach and front office decision maker Cheryl Reeve asked Taylor how to approach the 2019 season, with options that included rebuilding. Taylor had seen Reeve’s past skills to acquire talent and coach the team to high performances. He didn’t want a rebuild.

Taylor got involved with “recruiting” players to Minneapolis but he downplays the importance of what he did. He told players the Lynx has a culture that distinguishes the franchise from other WNBA organizations. “So you know I did the pitch,” Taylor recalled. “It helped her but I am not implying anybody came because of me.”

It was announced yesterday that Reeve was voted by her peers WNBA Basketball Executive of the Year for her work as the Lynx’s general manager.

Vikings wide receiver Adam Thielen led the team in receptions and receiving yards against Green Bay last Sunday, with five catches for 75 yards. He holds the franchise record for most receptions against the Packers, coming up with 12 in two different games.

Thielen, a Minnesota native, was asked if his focus or intent is different in the rivalry games against the Packers. “No, no, not at all,” he told Sports Headliners. “It’s the National Football League. If your emotions aren’t the same for every game, you got a problem. You only have 16 games. You gotta bring it every week.”

Thielen has 212 receptions since 2007, tied for fourth most in the NFL.

The Vikings, 1-1 after their loss to the Packers, play the Oakland Raiders Sunday in Minneapolis. The two franchises met in Super Bowl XI, with the Raiders winning 32-14, and giving the Vikings one of their four Super Bowl losses. Ten individuals associated with that Raiders team, including owner Al Davis and coach John Madden, have been enshrined in the Pro Football Hall of Fame.

Minnesota Twins Luis Arraez and Mitch Garver appear at the Fan HQ Ridgedale store on September 21 and 22 respectively. The Minnesota Wild’s Zach Parise is scheduled there September 30. Details on celebrity appearances at Fanhqstore.com.

CollegeAD.com reported that through Sunday tickets sold on Vivid averaged $611 for next Saturday’s Georgia-Notre Dame game in Athens. That’s the most expensive college ticket this season, CollegeAd said on Wednesday. By contrast the average for the Wisconsin-Michigan game coming up in Ann Arbor is $184.