Glen Mason remembers the last time he saw Marion Barber III. It was not long after Barber retired following the 2012 NFL season and he was back in town.

Over the years Barber called his former Gopher coach and this time he wanted to have dinner. Barber was thinking of moving back to Minnesota where his parents and siblings lived.

Mason said to come over to his house for dinner. Barber, who didn’t drink alcohol, arrived with an expensive bottle of champagne. He insisted Mason drink the whole bottle, while it was at its bubbly-best that evening.

“I am not a big drinker,” Mason told Sports Headliners Friday. “I got half shit-faced. I mean he was laughing at me. He said, ‘Coach, you’re slurring your words.’ I said, Marion, it’s your fault.”

Police from Frisco, Texas found Barber, age 38, dead in his apartment several days ago. Media reports are police were at the apartment as part of a wellness check but the cause of death hasn’t been publicized.

Barber had been detained by police in Texas in 2014 and given a mental health evaluation. The online Fort Worth Star-Telegram reported recently that a year ago former Dallas Cowboys teammate Dez Bryant tweeted that “he’s down and out bad.”

After leaving the Gophers and Mason following the 2004 season, Barber became a key contributor as a running back for the Cowboys. He played six seasons with Dallas, then finished up his pro career playing for the Chicago Bears. 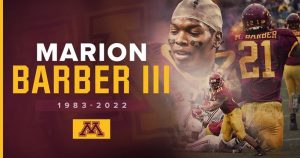 Mason, who was Minnesota’s head coach from 1997-2006, believes the last time he talked by phone with Barber was about 18 months ago. He wanted to fly down to Texas, show up at Barber’s door and the two could spend time together. Mason didn’t know specifically what Barber’s issues were, but he was aware there were problems.

The coach was aggressive about arranging a visit but Barber pushed back and said he was busy. “Well, after I did that, any time I called him, he didn’t take my call and he didn’t return my call,” Mason remembered.

Most of the world, including in Minnesota, knows Barber’s name as a football player. Mason, who saw Barber almost every day from 2001-2004, will tell you that as good as the former All-Big Ten running back was on the field, he was a better person.

“He was kind of shy. …I wouldn’t say he was a class clown but he was kind of a practical joker. He’d give you a laugh all the time.

“Everybody liked Marion. Over a four-year period, he didn’t give me one minute (of a) problem. He never did anything wrong. I don’t know of a player I liked more than Marion Barber.”

About a month ago Mason was down in Florida and encountered Bill Parcells, Barber’s first head coach with the Cowboys. The Pro Football Hall of Fame coach told Mason that Barber was one of his favorite players. “That guy knew how to play football,” Parcells said.

Barber played high school football at Wayzata before attending Minnesota. Younger brothers Dom and Thomas followed Marion to the Gophers. Their father, Marion Barber Junior, was a great running back for Minnesota in the late 1970s.

It was suggested to Mason the family’s legacy at the University of Minnesota is unique—that the Barbers are the first family of Golden Gophers football. “All contributors, all-stars in their own right. I can’t think of a (comparable college football) program,” Mason said.

Mason revels in telling the story of how Barber came to his program. Although a successful running back and defensive back at Wayzata, there was minimal interest from college coaches. “Really no one was recruiting him, no big schools including us,” Mason recalled.

Mason lived within a short drive of Wayzata High School so he was aware of Marion. Another connection to the Barber family was that in the 1970s Mason was an assistant coach at Illinois when the Illini were recruiting Marion Jr.

As the recruiting period in 2001 was drawing to a close Mason questioned his staff about whether a scholarship should be offered to young Marion as a defensive back. Mason received push back from the staff and one assistant asked what made the boss believe Barber could play defensive back in the Big Ten. Mason answered because Barber was the one defender who intercepted Cretin-Derham Hall quarterback Joe Mauer.

Mason brought Barber to campus and offered him a scholarship—as a defensive back. No, thanks.

Barber insisted he was a runner and declined the offer.

A few weeks later Mason encountered Marion Jr. and inquired if his son had college offers cooking. The answer was no, so the persistent Gopher coach called Marion III and again offered a scholarship as a defensive back. “If you’ve got any sense you’ll take it,” he told Barber.

This time Barber accepted but the teenager soon showed his own persistence to Mason. While still in high school, Barber called and asked for a meeting.

He had a proposal. Let him play running back for his first season at Minnesota and if it didn’t work out he would be willing to play any position for the Gophers. Mason figured why not accept the deal because Barber wasn’t going to see the field anyway in his first year with the program.

But months later, at the first day of practice, the freshman running back was making an impression. After about 30 minutes running backs coach Vic Adamle told Mason the coaches had misjudged Barber and “this kid is good.”

Mason won’t take credit for how Barber surprised everyone from the start of his college career. “We gave a kid a chance mainly because his dad was a player here. If you can’t take care of your own, then shame on you. He did it all on his own and proved everybody wrong.”

Mason, whose previous head coaching stops also included Kent State and Kansas, can’t say exactly why Barber was misjudged out of high school and was so special immediately in college. He has a theory, though, that for whatever reason many Minnesota prep football players are late developers. He saw this prove out over and over again at the U, including with offensive linemen.

Barber ranks fifth all-time in rushing yards at Minnesota with 3,276. His 35 rushing touchdowns rank second and his 575 career carries are seventh. He made first-team All-Big Ten in 2003.

He and Laurence Maroney were the first pair of NCAA running backs to each produce 1,000 yard seasons in consecutive years on the same team. After Barber ran for 975 yards and 10 touchdowns for the Cowboys in 2007 he was selected for the Pro Bowl.

Barber deserves a place among the best U running backs ever. No one might have run harder, had more determination. Yet he could be shifty with a burst of speed, too. He also excelled as a pass receiver and the Gophers sometimes used him as a slot receiver to put both he and Maroney on the field at the same time. “He was just a tremendous running back,” Mason said.

With a love of contact, ferocious might be the word best describing Barber’s running style. “Strong, bruising runner,” Mason said. “I think it got to the point where people knew if you’re going to play Minnesota you better buckle it on. …”