Friends call him “Billy Rob.” It’s a nickname you might expect to hear when kids are choosing teams for a hockey game at a neighborhood pond. “Yeah, Billy Rob, you play goalie, okay?” When spoken by adults, the nickname shows how comfortable people are with Robertson who has a decorated behind-the-scenes career in professional sports.

Bill Robertson has many friends and admirers, and they celebrated his success a few days ago when the United States Hockey League announced that the St. Paul native is its new president and commissioner. Facebook, text, telephone and in-person messages congratulated Robertson on his new assignment to lead one of the world’s best junior hockey leagues. The total may have been about 1,000 well wishers including the likes of hockey’s Ryan Suter and baseball’s Paul Molitor.

Two years ago Robertson, then commissioner of the men’s WCHA, sat with a friend in a Bloomington restaurant and wondered what he might be doing in the summer of 2021. Most of the member schools in the Western Collegiate Hockey Association had announced in 2019 they were forming a new league for the 2021-2022 season. The end of the historic WCHA was more than a possibility. In the months following that Bloomington lunch Robertson continued to lead the WCHA, hoping to secure new members, but knowing that in June of 2021 and beyond he could be with another organization.

Several career possibilities were in play this spring, with Robertson telling Sports Headliners he had been talking with the USHL since the beginning of the year about succeeding his friend Tom Garrity as league commissioner. “When they told me several weeks ago that I was their candidate, and they would be forwarding me an agreement, there was a big sigh of relief,” Robertson said. “I sat in my chair for a few minutes, and put my head down, and thanked God for watching over me. To be honest…I wasn’t sure where I was going to end up next.”

Dave Mona, who built a public relations empire in Minnesota, wasn’t surprised Robertson landed with another hockey league that will have its leader based in the Twin Cities. “Bill is very good at what he does and he makes friends along the way,” Mona said. “So I think he’s on everyone’s list when someone says, ‘Hey, there’s an opening, do you know somebody?’

“Bill’s got a pretty board skill-set and I think he’s been extraordinarily skillful… making friends at all levels, people who enjoy being with him. He does what he does well. I don’t think he has to apply for a lot of jobs. People say, ‘Well, what about Bill Robertson?’ ”

During seven years leading the WCHA, Robertson successfully brought playoff games back to campuses, introduced the 3-on-3 overtime and shootout format to league games, and championed safety provisions. His commitment to a fan-friendly league that included overhaul of the WCHA’s digital operation, and he developed external corporate partnerships and sponsorships.

With the USHL, the 60-year-old Robertson will contribute extensive marketing experience and one of his initiatives will be how to grow the sport, not just for his 16 league franchises, but hockey in its entirety. He wants to see the expense issue of playing hockey addressed and with the best initiatives there will be more participation by both boys and girls. USA Hockey, the NHL and colleges are partners he looks forward to working with.

Robertson’s ties with hockey go back to childhood as the son of Norbert Robertson who played collegiately for both Minnesota and St. Thomas. Brother Mike played hockey at Boston College in the late 1960s. Bill was an executive with the startup Minnesota Wild from 1998-2011.

It was in those early Minnesota Wild years that Robertson and Patrick Klinger became acquainted. Klinger worked for the RiverCentre event complex in St. Paul and later became an executive with the Minnesota Twins. “We very quickly became fast friends and have been best of friends ever since,” Klinger said.

How did the bond form and stay in place all these years? “He’s such a high integrity individual,” said the 57-year-old Klinger. “You know, we share a lot in common. We have two children. Each of us has one that has special needs. We sort of grew up in the sports industry together…and here we are 20-plus years later, and my admiration and respect for Bill is greater than it ever has been.

“We play a ton of golf together. We talk, we go out to dinner. We do a (cable) television show together. I love the man, I really do.”

Klinger recognizes a flaw or two in his pal. “He’s an awful, awful putter. I am telling you what, Stevie Wonder would putt better. Watch him get to the green and then putt, and putt again, and a third time. Sometimes we just have to bite our lips. You know, he gets a little feisty.”

Klinger fondly recalls an “epic match” involving the two at a Hastings, Minnesota golf course. “There was some money on the line and it got to the 18th hole,” Klinger said. “Bill had literally like an 18-inch putt, maybe not even that much to tie the match, to tie me. It would have gone into sudden death. I wouldn’t give him the putt. Of course, he missed it. He’s never let me forget it.”

Robertson recently celebrated his USHL hire in South Carolina, with daughter Brooke, and son Brett and his wife Maritza. The trip had been planned for awhile to get in some long overdue family time, and turned out to be more special than anyone could have imagined. 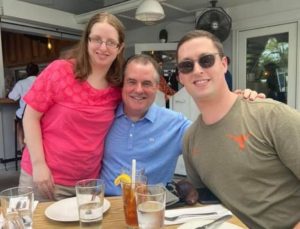 “I don’t think there’s any greater gift than to have children, and I have two wonderful people,” Robertson said. “One is in his late 20s, my son, and my daughter is in her mid-20s. The thing that made me just tickled as a father was the fact that I watched the two together…in South Carolina and how they meshed together like when they were really young. It was so wonderful to see. I had some tears in my eyes watching how they interacted and how the older brother helped the younger sister with a lot of tasks. Just trying to help her continue to develop more skills and her independence.”

In recent days Robertson might have reflected on his career in the sports industry. He was Director of Communications with The Walt Disney Company, and in that role he led communications efforts for the Mighty Ducks of the NHL and Anaheim Angels of MLB. Before that he was the media relations boss of the NBA expansion Minnesota Timberwolves in the early 1990s.

Mona commented that media folks are often a cynical bunch but Robertson didn’t treat reporters, columnists and talking heads as adversaries. “They all speak highly of him, even though they may have known him two or three jobs ago,” Mona said. “They have lunch with him a couple times a year. When their kids graduate from college and you read the Facebook comments, one of the first comments is from Bill Robertson. He’s got really good people skills and he’s got…a knowledge of, and a track record of, being able to bring people together and get things done.”

Klinger has long observed how Robertson relates to people in various positions. How he treats individuals with authenticity and sincerity, no matter who they are.

“What you see with Bill is what you get,” Klinger said. “He really genuinely cares about people. …

“He knows that I am going through a difficult time with my back. He’s the guy that’s gonna pick up the phone, call me almost every day to check in, or send me a text. If something else is going on in life, in business, in family, I know I can call Bill and he’ll drop everything. We’ll get together and talk things through. And vice versa. We’ve done that for each other for a long time.

“He’s just that person that’s authentic and genuine and kind-hearted. He’s somebody that will do anything for his friends and family.”

While growing up in St. Paul, Robertson dreamed of having a baseball career, perhaps becoming the next Paul Molitor. He was passionate about the sport as an infielder at Cretin-Derham Hall.

His passions also include the city he reveres. “You know, he was born and raised in St. Paul, on St. Paul Avenue,” Klinger said. “Went to Cretin, loves the city. He’s in the Mancini’s (Sports) Hall of Fame. St. Paul is in his blood.”