The NCAA’s recent decision allowing Division I college football players to play in up to four games and still preserve their redshirt status will help the Golden Gophers starting this fall.

In prior years a player lost his redshirt status just by taking one snap in a game. Effective this season coaches will have more roster depth because they can use players that in the past were sidelined so they could redshirt, allowing five years to complete four seasons of eligibility.

The five years and four seasons status remains, and former Minnesota coach Jerry Kill likes the rule change. “I think you get banged up (with injuries) and it gives you a chance to look at some of those freshmen for four games and it doesn’t count as a year,” he told Sports Headliners on Monday.

Kill rebuilt Gopher football from 2011-2015. He and his staff upgraded the coaching and the talent. Although Minnesota became a winning program, Kill struggled to build adequate depth. That’s a challenge that also faces second-year coach P.J. Fleck going into this fall where he will have a much anticipated freshmen class.

When injuries hit most of the programs in college football they often don’t have the talent in reserve they would like. “It hurt us in a couple bowl games we played because we had no depth,” Kill said. “It made it tough on us. I think there’s no question that it helps Minnesota, and I think it helps everybody else, too.”

Kill is the new athletic director at Southern Illinois and has made a number of hires including Jeff Jones and Andy Harris. Jones worked for Kill at Minnesota as director of player personnel, and now is an administrator with Southern Illinois, his alma mater. Harris, who was involved with equipment when Kill was with the Gophers, is director of equipment operations with the Salukis. 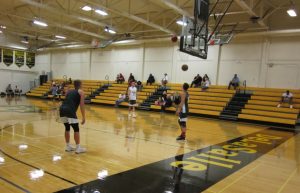 Jamar Diggs, who runs the Twin Cites Pro Am summer basketball league at DeLaSalle, sees a variety of players including those still in high school. Among the youngest players who have impressed him is DeLaSalle High School guard Tyrell Terry who is headed to Stanford in 2019. “His skill set is through the roof,” Diggs said.

The Capital Club will have golf executive Hollis Cavner, who is bringing a PGA Tour event to Minnesota next year, as its speaker July 26 at Town & Country Club in St. Paul. Kate Mortenson, who heads up the 2019 Minneapolis Final Four Local Organizing Committee, speaks to the group August 14. More information about the Capital Club is available from Patrick Klinger, patrickklinger@klingercompany.com.

Klinger founded the Capital Club in November of 2014, almost five years ago. The club focuses on well-known speakers who provide perspective on what they do.

Jay Weiner, whose byline was seen on the Star Tribune sports pages for years, announced on Facebook he starts a new job this week in communications for the Federal Reserve Bank of Minneapolis. Most recently he worked for seven years as a speech writer for University of Minnesota president Eric Kaler.

Jeff Seeman, a Minnesota native and U alum, is returning for his 17th season as an NFL official. His father, the late Jerry Seeman, was one of the most revered officials in league history.

The Vikings are one of four NFL teams with the latest reporting date to training camp for veteran players. The Vikings, Broncos, Cardinals and Chargers all report to camps on July 27.

The Vikings rookies report to the TCO Performance Center in Eagan on July 24, three days before the veterans.

Jose Berrios will be on the American League All-Star pitching staff for the game against the National League All-Stars later this month in Washington, D.C. Berrios, 24, will be a first-time All-Star but he is likely to be selected multiple times in what looks like a long and promising career. Former Twins pitcher Jack Morris described Berrios as “almost unhittable” at times earlier this year.

Berrios, 9-7, beat the Royals last night while pitching seven innings and giving up one run. It was his 12th quality start of the year and the ninth time he has pitched seven innings or more.

Berrios could be pitching to former Twin Wilson Ramos in the D.C. All-Star Game. The Rays’ catcher has also been with the Nationals since Minnesota traded him to Washington on July 29, 2010 for relief pitcher Matt Capps. The Twins have struggled to solidify their catching for years, while Capps was gone after the 2012 season.

It’s not every day baseball fans can watch a 53-year-old player but former MLB star Rafael Palmeiro is with the American Association’s Cleburne Railroaders who take on the St. Paul Saints tonight at CHS Field.

The 2018 Schwan’s USA Cup youth soccer tournament at the National Sports Center in Blaine will generate $36 million in economic impact during its nine-day run, July 13-21. The economic impact from visitors staying overnight will be $28.1 million alone, according to a statement released yesterday by a Cup spokesman. Visitor spending will also generate a projected $233,515 in local tax revenue.

The 34th annual tournament will draw 1,150 teams, representing 20 different countries, 20 states, and four Canadian provinces. The tournament is the largest soccer tournament in the Western Hemisphere.