Veteran Gopher hockey coach Don Lucia told Sports Headliners yesterday he wants to talk with athletic director Mark Coyle about a contract extension after the season. “We’ll have a conversation this spring and see where things are at,” Lucia said.

Coyle became athletic director last spring when Lucia had only a year left on his contract. A two-year extension was signed last fall taking Lucia through the 2018-2019 season. Lucia said the two men agreed last year further contract discussions will happen after this season.

Lucia doesn’t want a situation where he will be coaching next season with just one year to go on his deal—prompting speculation about job security and being a deterrent to recruiting. “Mark, I think, will be very fair,” Lucia said. “We’ll just wait until the year ends and sit down and see where we’re all at.”

New athletic directors are sometimes known for wanting to hire their own coaches, and Tracy Claeys received that message when the first-year Gophers football coach was dismissed last January despite a 9-4 record. Lucia referred to any similarity between him and Claeys as “apples and oranges.”

“I think I have a pretty long track record that speaks for itself,” Lucia said.

Lucia, 58, is the longest-tenured Gophers hockey coach ever. He has coached Minnesota teams for 18 seasons, including consecutive national championships in 2002 and 2003. He wants to continue indefinitely coaching the Gophers.

“I still have energy,” he said. “I don’t look at (it as) is it three (more) years? Five years? One year? I don’t know. I don’t look at it that way as much as you just try to do everything you can to have the best year you possibly can. As long as you love what you do, you want to continue to do it.”

After not qualifying for the NCAA Tournament last year for the first time in five years, Minnesota is playing like a national power again. The Gophers are 21-9-2 overall and ranked No. 5 nationally in the latest USCHO.com poll. Lucia’s team is 12-4 in Big Ten games and alone in first place. The Gophers could be headed to their fourth consecutive conference championship.

Lucia likes this season’s team including senior forward Justin Kloos who isn’t big physically at 5-9 but has come up with six game winning goals. Kloos is one of the team’s three candidates for the Hobey Baker Award honoring college hockey’s best player. The others are senior defenseman Jake Bischoff and sophomore forward Tyler Sheehy. 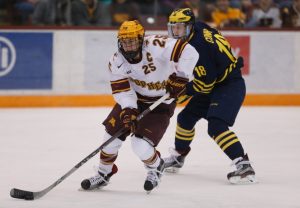 “He’s an example of a player that because he is a little bit smaller, he didn’t get drafted, but yet he is an elite college player,” Lucia said. “Sometimes guys like Justin Kloos are far more valuable than a guy who gets drafted because he is bigger, but may go (on to) have a bigger impact at the pro level than the college level.”

Although the Gophers have shown the ability to come from behind in games, Lucia has a “magic number” in mind when he talks about the importance goalie Eric Schierhorn will play in determining how deep Minnesota’s NCAA Tournament run may go. “When he gives up two (goals), we’ve yet to lose a game, so that’s kind of the magic number for us,” Lucia said. “We gotta be able to count on him at the end.”

The Gophers have two weekends ahead of regular season conference games. The Big Ten Tournament will then be the weekend of March 16-18 in Detroit. Lucia doesn’t want to focus on NCAA Tournament hopes for multiple reasons including the fact parity in college hockey can interrupt plans.

“If the season ended today, three of the four teams that were in the Frozen Four wouldn’t be in the NCAA Tournament this year that played last year including the two teams that played for a national title,” Lucia said. “That’s how difficult it is in college hockey today versus 10 or 15 years ago.”

For all the success Lucia has experienced coaching, he also likes to talk about the academic work of his players. All the players on his roster either have their degrees or are making progress toward graduation. Lucia believes that in the last 10 years only one player who was with the Gophers for four years didn’t earn a degree.

“That’s what it’s all about,” Lucia said. “We’re all judged on wins and losses. We get that, but I think as a coach you want to make sure that when the kids come to your program and play for you they leave with their degree. When it’s all said and done that’s gonna be the most important thing that they can do in their four years.”

For probably the first time ever, the Gopher men’s basketball postseason banquet will be held on the Williams Arena floor. Coaches, players, fans and others associated with the program will sit at tables on the floor of the historic arena Monday night March 27. The public is welcome, with more information available at the program’s booster club website, Goldendunkers.com.

The Minnesota Football Coaches Association is offering a Youth Coaches Clinic March 31 and April 1 at the DoubleTree Hotel in St. Louis Park. The clinic will offer various sessions including ideas for building a youth football program, practice planning, defensive drills and developing young quarterbacks. There will also be an opportunity for attendees to hear from new Gophers head football coach P.J. Fleck. More information is available by clicking on the MFCA advertisement on this page and visiting the organization’s website.

Mike Condo, a starting defensive back on the Gophers 1967 Big Ten championship football team, passed away a few months ago. A Pennsylvania native, Condo was an aggressive player and three year letter winner from 1965-1967. “Pound for pound as tough as they were,” said former teammate Jim Carter.