It may have slipped by most University of Minnesota football fans and even a few Golden Gophers historians, but last night your favorite college program earned its first ever win in Arizona.

The drought is over. This is reported with both amusement and relief.

In 1969 Minnesota, just two years removed from a Big Ten championship, got ambushed by Arizona State in Tempe. Back in those days the Sun Devils were members of the lightly regarded Western Athletic Conference, a league that seldom received a nod in Big Ten country.

Coach Frank Kush and the Devils saw an opportunity to make a statement to the college football world. They did just that, embarrassing Minnesota by a 48-26 score indicative of the difference between the two teams on a September night in the desert.

Maybe the Devils jinxed the Gophs back in ’69. Not only did the next several decades of Minnesota football look nothing like the glorious past of conference titles and national championships, but even a return to ‘Zona in the new millennium brought more frustration.

The Gophers had a 35-7 halftime lead over Texas Tech in Tempe in the 2006 Insight Bowl. By the end of the fourth quarter the game was tied 38-38 and the Red Raiders won in overtime 44-41. Pass-happy Texas Tech threw 55 times and Minnesota had no second half answers.

The “stubborn” Gophers made return trips to the Insight Bowl in 2008 and 2009. Same destination with the drought continuing in the desert, losing 42-21 and 14-13 to Kansas and Iowa State.

The Arizona football gods tried to hex the Gophers again last night at Chase Stadium, the baseball facility with a retractable roof. On a rainy night in Phoenix, Guaranteed Rate Bowl authorities briefly opened the roof just before kickoff to allow sky divers to prove for the umpteenth time they can land on a football field (BTW, this one with recently installed new sod). 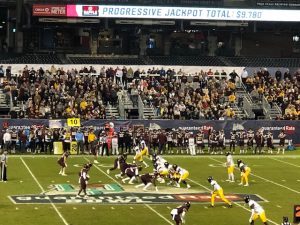 A less than ideal playing surface had the Gophers sometimes unsure of their footing and prone to mistakes. Such was the case in the second half when wide receiver Mike Brown-Stephens fell down on his pass pattern and allowed a West Virginia interception. Yes, the Mountaineers played on the same surface but lest you forget the curse of the desert, the boys from Morgantown looked steady on their collective feet.

And if the field conditions weren’t enough to cause a pre-game “here-we-go-again” mindset, a woman named Stormy was the sideline reporter for ESPN’s telecast!

When Minnesota endured the 1969 butt-kicking that started the struggles in Arizona, the Gopher coach was Murray Warmath who was born December 26, 1912 and died in 2011. He received a birthday present of sorts this week with his former team playing the kind of dominating defense, advantageous field position and time consuming football he preached at Minnesota. His 1960 team won Minnesota’s last national championship.

Minnesota ended bad times in Arizona by holding the Mountaineers to just one touchdown and 206 total yards of offense. The West Virginia running game was shut down and the passing results were not a whole lot better. The Gophers sacked the quarterback five times, bringing frequent pressure that helped hold the Mountaineers to 140 yards passing.

This season defensive coordinator Joe Rossi removed any remaining doubt about how important he is to the Gophers. He doesn’t like being referred to as “a guru” by his players but when your defense ranks among the best in the nation and allows only one opponent in 13 games to score over 28 points, you deserve accolades. 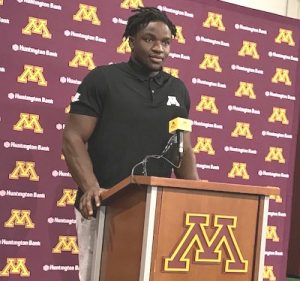 Minnesota’s kicking game and offense had the Mountaineers starting drives inside their 30 and 20 yard lines. Gopher defensive end Boye Mafe, who had a stellar night auditioning for NFL scouts, nearly caused a first half safety while tackling the West Virginia quarterback, Jarret Doege.

Minnesota’s time of possession was 38:29. West Virginia’s 21:31. The disparity was due mostly to the Gophers hoarding the football with their running game. That success started up front with its veteran line led by right tackle Daniel Faalele who also scored high with NFL evaluators while playing his final game for Minnesota.

In the first quarter the offense failed twice inside the West Virginia 10-yard line. Minnesota’s Ky Thomas fumbled to end a drive and Matthew Trickett missed a makeable 33-yard field goal try. That cost the Gophers points on a night they could have won the game by a much larger margin.

With Rossi in charge, it looks like the Gophers can consistently produce defenses that will do their part in winning a Big Ten West Division title. But to take the next step the Gophers have to raise the bar offensively, particularly with the passing attack including better play calls, catching consistency, big gains and more points. With the return of Kirk Ciarrocca as offensive coordinator, there is hope the Gophers can develop a passing offense that better complements their successful running game.

But before washing the desert sand out of their eyes and looking to 2022, the Gophers should take a few days to celebrate their triumph in Arizona and what it represents. Minnesota finishes 2021 with a 9-4 record including three straight wins and that sounds a lot better than 8-5. This is the second time in three years the Gophers have won nine games or more.

Among the victories in 2021 was taking down a nationally ranked Wisconsin team that has won seven of its last eight games. The late November win over the Badgers was the first time the Gophers claimed Paul Bunyan’s Axe in Minneapolis since 2003.

Head coach P.J. Fleck is now 3-0 in bowl games because his teams come prepared to compete instead of arriving with a “let’s party” approach. The focus is there for four quarters. In all games during the Fleck era (dating back to 2017) the Gophers are 33-4 when leading at halftime.

Fleck’s overall record at Minnesota is 35-23 but he is 23-10 the last three seasons. His winning percentage of .603 is third best among Gopher coaches who coached in 45 games or more. Minnesota has had 19 coaches since 1900 and Fleck ranks sixth all-time in program wins.

Fleck’s Big Ten record is 21-22 after going 6-3 this fall. In Warmath’s first six conference seasons he won 15, lost 25 and tied 2. Since 2000 the Gophers have produced five winning seasons in Big Ten games, with two coming under Fleck.

Oh, yes, one other stat before signing off. Fleck is 1-0 in the desert.