New University of Minnesota basketball coach Ben Johnson puts his team in front of a Williams Arena crowd for the first time in less than two weeks when the Golden Gophers play an exhibition game against the Golden Bears of Concordia-St. Paul.

The November 1 game will provide first impressions of a roster with two returning players from last season. That total of two comes with an asterisk. Senior redshirt forward Eric Curry, who has struggled through injuries during his college career, is back and available for limited playing time but junior forward Isaiah Ihnen is out for the 2021-2022 season with a knee injury.

This Gopher team is not only new to the fans but also to themselves. The arrival of 13 new players with different backgrounds, skill sets and personalities makes Johnson’s crew among the most transitional in the college basketball world.

This roster is loaded with players who before transferring to Dinkytown were members of mid-major and lower division college programs. The collective talent, judged by past performances, looks modest. As expected, media forecasts have Minnesota finishing last in the Big Ten standings.

For the Gophers to win games, Johnson preaches unselfishness to his players. They have to sacrifice on the court for one another. Do the little things and the most important ones to make the whole better than the parts. Be a unit that plays with a togetherness the opponent can’t match.

“We need to be a team of all teams,” Johnson said. “We need to lead the league in high fives and butt slaps.”

Johnson’s roster has eight seniors, two juniors, two sophomores and three freshmen. That maturity could result in a buy-in all season to what Johnson and his staff are teaching and asking of the players.

The coach knows his team must not only be selfless, but also imposing. “We’ve gotta be the toughest team, especially this year. We don’t have a lot of room for error. Our mental toughness, our physical toughness has got to be on point.”

If the players are to perform the way Johnson intends for them, it will help if they like one another. He said the “chemistry,” including off the court, is there. The players are bonding. “Their personalities all meshed,” he said. 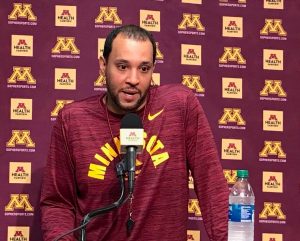 Johnson and his assistants are determined to have both player and team development be core values in their program. They want to see and for fans to witness the improvement of the team and individuals.

Playing together, toughness and improvement are to be bedrocks of the new program. “When fans walk away from Williams Arena, we want them to know what Minnesota basketball is all about,” Johnson said.

Johnson talking about assistant coach Dave Thorson: “He is going to have a heavy voice in what we do defensively.”

Lindy’s college basketball magazine is among the media predicting a slow start to the new Gopher basketball era. “Ben Johnson’s dream job in his hometown should come with some grace from the fans,” writes Lindsey Willhite.

Lindy’s top 100 prep seniors for the class of 2022 includes at No. 63 Gopher commit Braeden Carrington of Park Center. Other Minnesotans on the list are No. 15 Michigan State commit Tre Holloman from Cretin-Derham Hall and No. 96 Boston College commit Prince Aligbe from Minnehaha Academy.

A tweet yesterday responding to a GopherHole post that Johnson’s team isn’t ranked in the AP preseason top 25: “Also, water is wet.”

The 3-0 Wild has only nine players on its roster who were with the club at the beginning of the 2019 season, including Joel Eriksson Ek who had the winning goal last night in overtime against the Jets. GM Bill Guerin, hired before the 2019 season, has reshaped the team and apparently the culture.

Owner Craig Leipold credited the fans for the energy that helped the Wild to the 6-5 win in front of a raucous crowd.  He said that’s “the best marketing” the club could have.

Leipold on whether his team can go undefeated in the 82-game regular season: “I don’t think so.”

The Timberwolves open their season tonight at Target Center against the Rockets and it looks like two overriding elements will determine whether Minnesota can make the playoffs for only the second time since 2004. The Wolves core players have to avoid long stretches without being sidelined. Second, this team must go from being one of the NBA’s worst defensively to at least mediocre.

Set the ceiling for wins at 45.

The public will take a wait-and-see approach. “They’re tackling people to come to games,” a sports executive said Monday.

From the Nobody Asked Department but. …James Franklin will be the next head football coach at USC. Joe Brady will take over at LSU.

Vikings QB Kirk Cousins passed for 373 yards, three touchdowns and no interceptions for a 112.6 rating in Sunday’s 34-28 overtime win against the Panthers. He now has 20 career games with at least 300 passing yards, three touchdown throws and a passer rating of 110-or-better. That surpasses the Packers’ Aaron Rodgers (19 games) for the most such games by a QB in his first 10 NFL seasons.

Vikings wide receiver Adam Thielen said his superb TD catch at the pylon Sunday was in the same space of the Carolina stadium end zone where he dropped a ball in 2017.

Amani Hooker, the Titans safety from Park Center, returned from the injured list to play in Monday night’s upset win over the Bills. The 2019 fourth round draft choice is considered a potential star in Nashville.

With Billy Beane and Theo Epstein reportedly turning down the opportunity to lead the Mets, have to wonder if Twins boss Derek Falvey will receive an inquiry.

Minnesota youth of the 1960s loved the Twins but many worshipped Mickey Mantle and rooted for him when the great center fielder came to Met Stadium with the Yankees. If still alive, the Mick would be 90 years old today.