U Secondary May Rank with Best

The football Golden Gophers are about halfway through spring practices. At this point there is a lot to like about the defensive secondary.

Veteran starting linebacker and team leader Mariano Sori-Marin was asked after practice yesterday if the secondary will be among the best in the Big Ten Conference next fall. In his answer he went beyond the Big Ten.

Conversations about individuals in the secondary can begin with Tyler Nubin. He was honorable mention All-Big Ten last season and defensive MVP at the Guaranteed Rate Bowl in December when the Gophers defeated West Virginia. He has already lettered three times at Minnesota and he led the team in interceptions in 2021 and was third in tackles. Sori-Marin describes Nubin as a fly-around-the-field safety and “vocal leader.”

Other returning starters in the secondary are safety Jordan Howden and corner Justin Walley. Howden has played in 45 games at Minnesota and will forever be remembered by Gopher fans for his late game interception in 2019 against No. 5 ranked Penn State. He has been named Academic All-Big Ten the last three seasons.

As a freshman last year Walley played in all 13 games and started the final six. The former Mississippi Mr. Football was named to the 247Sports True Freshman All-American team. He and Nubin are certain to be candidates for All-Big Ten next fall.

The Gophers have a cornerback spot to fill but candidates to become the starter have experience and skills. Transfers Beanie Bishop and Ryan Stapp have impressed at spring practice. Bishop was an All-USA Conference selection at Western Kentucky, while Stapp is highly regarded, too, after three seasons at Abilene Christian.

Terrell Smith is a four year letter winner for the Gophers and started seven games last season. He also was Academic All-Big Ten in 2019, 2020 and 2021.

Minnesota had one of the most effective defenses in the nation last season including against the passing game. The Gophers gave up 1,812 passing yards, ranking No. 8 in the nation.

While there are plenty of personnel questions to be answered before next season regarding the defensive line and the linebacker roster, Sori-Marin sees the whole unit’s overall potential. “There’s just so much speed and athleticism in this defense,” said Sori-Marin who earned All Big Ten Honorable Mention in 2021. “There’s so much we can do but we just have to focus on the details. There’s one thing to say we can do all these things—but if you’re not focusing on the details, or the basics, we can’t take it to the next level.”

The Gophers’ secondary looks poised to do more than its share and could be ready to be one of the best in school history.

Will WWE Make Steveson a Hero or Villain? 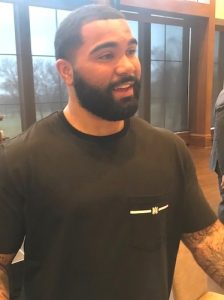 Olympic gold medalist and college national championship wrester Gable Steveson is a hero and role model. So when the Golden Gophers and Apple Valley legend makes his pro wrestling debut he will, of course, be a good guy, right?

Well, not so fast pro rassling fans. Apparently the script has yet to be written.

“…If I turn bad guy, then I am fine,” Steveson told Sports Headliners. “If I turn good, then that will be good.”

Steveson signed a Name, Image and Likeness deal with World Wrestling Entertainment (WWE) last year but the date for his first match is TBD. “I have no clue,” he said. “Whenever they tell me.”

Steveson is likeable, a charmer when he talks to individuals and groups. When those first WWE matches start coming in late spring or early summer his followers may expect to see their hero in a “white hat,” but the shtick in pro rasslin’ is all about creativity and surprises.

Beyond a pro wrestling career, Steveson acknowledges interest in mixed martial arts and perhaps one day fighting for the Ultimate Fighting Championship (UFC) enterprise. That was a path taken by another former Gopher wrestling legend, Brock Lesnar, whose WWE and UFC story Steveson is familiar with.

The winner of the heavyweight championship at the 2021 Olympics, Steveson also won two NCAA titles and three Big Ten championships during his storied career. Monday night at the Golden Goldys event he will learn whether he has added yet another prestigious title, the Big Ten Medal of Honor.

The award dates back to 1915 when it debuted to recognize individuals who had “attained the greatest proficiency in athletics and scholastic work.” Twenty-eight student-athletes will be recognized this year and more than 1,300 have earned the honor.