Ubiquitous Mike Max Did It Again

It was a surprise and yet it should not have been that Mike Max, WCCO TV’s sports director, was out on the streets covering last month’s social justice protests and rioting in Minneapolis.

Max, 55, has long demonstrated an extraordinary work ethic reporting on Minnesota sports for television and radio. The Gaylord, Minnesota native covers most everything from baseball to hunting and fishing. His deep network of contacts ranges from youth sports to hall of fame personalities. He thrives on working his beat and talking to sources.

Athletics are the “candy store” of reporting, but Max showed sportscasters are journalists too, able to cover breaking news as it develops. And that’s where Max found himself late last month after WCCO TV news room boss Kari Patey chose her sports director to go out on the streets of Minneapolis to cover the chaos that became a national story after the tragic death of George Floyd Monday, May 25.

There was major unrest the night of Thursday, May 28, including the disturbing images of the police’s third precinct being burned down. Max had finished the 10 p.m. sports that night and headed to his house. “When I got home Channel 4 was still broadcasting live because of this monumental event, and I just remember feeling ‘God, I wish I was out in the field somewhere. I wish I was doing something out there,’ ” he told Sports Headliners. “It almost killed me being home when my colleagues were… working.”

The next evening more breaking news developed involving protestors and looters. Patey needed help in the field and Max eagerly volunteered. He didn’t know what to expect but that only added to his curiosity and adrenaline.

That Friday night and into Saturday and Sunday Max was live on the scene of the unrest in various parts of the city. Viewers tuned into Ch. 4 and there was the sports guy reporting on one of the most dramatic upheavals the city has every witnessed. It was both peaceful and violent and the memories for Max will long be in his consciousness.

Max knows he watched history with a “front row seat.” He was motivated by both not knowing what was going to happen next and needing to perform for his TV audience. Part of the experience he valued, too, was working alongside the station’s team of on and off camera professionals, all pulling together to report the news in a challenging environment.

“Because I grew up playing sports I love playing on teams,” Max said. “I love it when we’re working together to try to do something, try to accomplish something. In this case, try to bring you the best coverage that we can.”

Out on the streets Max didn’t try to complicate his assignment. Just the opposite. “You just tell them (viewers) what you see,” he said. “It’s a real simple thing, you know. You just ask people what they see, and there’s no right or wrong answer. So you just simplify it. …”

A Ch. 4 viewer watched Max so close to protestors and police he could literally reach out and touch them. A rubber bullet or runaway vehicle might have struck him and done serious harm. Was he afraid at times? “ It’s hard to explain but I never, ever felt like we were in deep danger,” he answered.

Max was nervous, though, when approaching a chaotic scene on Lake Street where rioters were attacking the local Wells Fargo and stealing money, and threatening the police’s fifth precinct. The situation appeared out of control and he felt his nerves and adrenaline spike.

But then the police arrived in force. “…All of a sudden they showed up just like the cavalry, and it was just unbelievable the way they walked in and took control of that precinct, of that situation. I ended up getting tear gassed as part of it, but not intentional. It was just tear gas that blew over my way. That set me back some, but I never, ever really felt like we gotta make a run for it.”

After covering the civil unrest for long hours over three days Max looks back and finds praise for both peaceful protestors and law enforcement. He found many individuals who wanted their voices heard. They were articulate and thoughtful. His impression was most individuals he encountered were Minnesotans, not outsiders, and they had no intention of creating chaos including destruction of buildings and people’s lives.

Max saw law enforcement that had a plan and executed it with precision. The police and others worked with discipline, controlling emotions even when tested by those who sought to provoke them. “The law enforcement was so fricking impressive, I can’t put it into words,” he said. 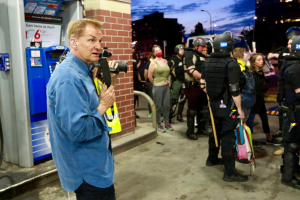 On Sunday night near Bobby & Steve’s Auto World on Washington Avenue Max watched law officers arrest and take away curfew violators. He was impressed with the friendly interaction between law enforcement and protestors. He witnessed friendly conversation, smiling and laughing.

“It’s like, from Minnesota’s standpoint, we’re all in this together,” Max said. “We may agree on one issue or not, but we really are one team, and I thought that was pretty powerful to observe.”

In this spring of COVID-19 Max drew attention for not wearing a face mask while reporting. It was always deliberate because he wanted people to recognize him as the sports guy from Ch. 4. “…That was incredibly advantageous because enough of them knew who I was, and I could engage them, and find out what they were doing,” he said.

Days and nights were long for Max over that last weekend in May. He made his way home late at night, but he has no complaints about fatigue or endurance. “When you’re out there in the community your adrenaline kicks in. That’s big,” he said.

Max is also dedicated to a conditioning and exercise routine that enables him to work long hours week after week. He lifts weights at least five days per week. He does cardio exercises for a minimum of 40 minutes every day. “I am fanatical about seven days a week, getting a really good workout in,” he said.

Max attended Hamline where he played baseball for four years. When he went to college there was no plan to be a journalist. ”I was majoring in business and took a video production class for fun and my professor said you seem to have a passion for this,” Max told Sports Headliners in a 2010 interview. “I really enjoyed putting a video together. She said you should try to go get an internship in this and I didn’t even know an internship existed. And that’s when I started knocking on doors and finally I got in to Ch. 4. … It wasn’t like I set out to be a reporter. I literally kind of fell into it that way.”

The internship at Ch. 4 was in 1986 so Max has come a long way as a sports journalist whose face and voice are widely recognized in Minneapolis and throughout the state. Yet professionally perhaps he may never have felt so alive as when he covered the drama of the city’s unrest last month. It was an assignment he would repeat “in a heartbeat.”

“If things like this happen again, I just want to be able to raise my hand and have her (Patey) have the confidence in me that I can go do it,” Max said.