The Vikings enter tomorrow night’s game at Chicago with a 6-7 record. That flirtation with a .500 record is indicative of what the club has experienced for 16 seasons dating back to 2005 when the Wilf family purchased the franchise.

The Vikings have been good enough to keep their fan base engaged, with the more exuberant followers dreaming of a Super Bowl appearance (hasn’t happened since 1977). The team had a season-for-the-ages when Brett Favre dropped into town in 2009. The 2019 season with a 13-3 record and postseason “Minneapolis Miracle” was special, too.

There have been a couple of seasons perhaps worthy of fans pulling paper bags over their collective heads at home games. Included on the short list is a 3-13 disaster in 2011. But there have been a lot of years where the final record was 9-7, 8-8, 7-9, 8-7-1 and Maalox-inducing-2021 (12 of 13 games decided by one possession, eight points or fewer).

Since 2005 the Vikings have won four division titles, with the most recent in 2017. They missed the playoffs last season after going 7-9 during the regular season. Their postseason success is shabby compared with NFC rivals. Twelve of the conference’s 16 teams have played in at least one Super Bowl dating back to 2005. The Vikings, Cowboys, Lions and Washington have not.

The NFL is America’s game and it capture’s public focus like few other things in our culture. Out here on the prairie Minnesotans want to be cool, too, and so it’s a tossup on Sundays whether church activities or the local NFL crew are more important. The Vikings have been competitive enough to play in dramatic games and they also stoke Purple passion with entertaining talents like Justin Jefferson and Dalvin Cook.

Many Vikings fans have a love-hate relationship with their team. Despite the mediocre on-field results for years, the fans aren’t apathetic about their favorites and that’s good news for the financial bottom line—and the Wilfs who bought the franchise for a reported $600 million. This year in its valuation of NFL franchises, Forbes estimated the worth is $3.35 billion. With inflation run amuck, that number could jump more than in the past when Forbes reports again in 2022.

The up-and-down Vikings get ready for the Bears Monday night and a showdown game that will weigh heavily on making the playoffs. At 6-7, with four games remaining, what’s all but certain is the final record will be around .500.

Gophers football coach P.J. Fleck talking on BTN Wednesday about promising defensive linemen recruits Trey Bixby, Anthony Smith and Hayden Schwartz: “Hopefully some of them can play and contribute as a freshman (2022).”

Eslinger’s college head coach, Glen Mason, recruited the North Dakota native as a fullback but converted Eslinger to center and started him as a true freshman. “He should already be in (the Hall of Fame),” Mason said in an email. “Crime!”

Crime No. 2? It’s an injustice Halsey Hall isn’t a member of the Twins Hall of Fame. Part of the Twins’ original broadcast crew starting in 1961, Hall is the most entertaining on-air personality the club ever had. Not even close!

Minnesota ticket sales are outpacing West Virginia’s for the December 28 Guaranteed Rate Bowl in Phoenix, per bowl CEO Mike Nealy. There might be 7,500 Gophers fans attending the game played at the Arizona Diamondbacks’ baseball stadium (capacity around 30,000 for football). Neal, who said the median ticket price is about $70, predicted attendance of 25,000 to 30,000 for the game, with up to two million TV viewers watching on ESPN.

The 8-4 Gophers are about a four point favorite against the 6-6 Mountaineers. 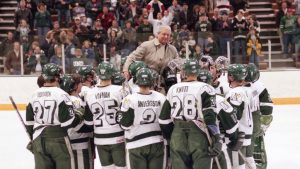 Condolences to family, friends and the many admirers of Bob Peters who passed away last week at age 84. The legendary Bemidji State hockey coach, who retired in 2001, won 13 small college national championships and ranks fifth in wins all-time among college hockey coaches, but more importantly he was a great mentor to his players.

Chris Justice knows how Peters impacted his life. Justice had a successful hockey career at Edina High School in the 1980s but initially decided not to attend college. A couple of years later, despite having experienced a car accident severely injuring his right arm, he asked Peters for an opportunity at Bemidji. Justice not only played for the Beavers but went on to become head hockey coach at Bemidji High School and remains a contributor to the sport in his adopted hometown.

The NHL’s Winter Classic series dates back to 2008 but the January 1, 2022 Minneapolis edition at Target Field will be the first one televised nationally in prime time starting at 7 p.m. Eastern. The day prior will offer a lineup of free activities for fans including hockey attractions and musical performances.

That was future new Timberwolves owner Alex Rodriguez in town for Friday night’s impressive win over the Lakers. The New York Post reported recently A-Rod sold his $6.3 million Miami house after his split with Jennifer Lopez.

Twins legend Tony Oliva is the latest guest on the “Behind the Game” program seen on over 25 cable markets and on YouTube. The show is co-hosted by Agile Marketing owner Patrick Klinger and USHL commissioner Bill Robertson.

The Minnesota-Green Bay men’s basketball game scheduled for a 7 p.m. start Wednesday will tip instead at 4 p.m. BTN will televise.

Gopher basketball alum J.B. Bickerstaff, now coaching the NBA Cavs, has his team a surprising seven games over .500 with the help of former Wolves Kevin Love and Ricky Rubio.