Tom Swain owns eight season tickets for University of Minnesota home football games. That might prompt a yawn, but here is the rest of the story: he or his family have owned season tickets every year except one since 1921.

“The year of my birth,” Swain told Sports Headliners.

This is birthday celebration week for the U grad, class of 1942 with a business and accounting degree. He celebrated his 100th birthday with family on Sunday. The U’s Humphrey School of Public Affairs will host a celebration Wednesday afternoon at the McNamara Alumni Center, and admirers will pay tribute to their friend whose professional career has crisscrossed the private and public sectors including the state’s flagship university. On Saturday he will be recognized for his milestone birthday, military service and dedication to climate change before the Minnesota Twins game at Target Field.

What does 100 feel like? Swain lives independently in a Lilydale care facility. He has spinal stenosis and uses a walker. He has peripheral neuropathy and difficulty with his larynx. But he is an articulate, active, humble and grateful centenarian.

“There are such few people that get there (to 100), I feel very gratified,” Swain said. “I am very fortunate to have made it this far because growing old is a privilege denied to many. I am not sure why I deserve to get to 100 but I am very grateful.”

Swain is a believer in staying active and finding a cause. “It gives you something to wake up for and get involved in,” he said.

When people asked what he wanted to do for his birthday, he brought up climate change. He describes it as the most important issue facing the world and believes much has to be done to avoid “an ominous end to this planet.”

The Swain Climate Policy Fund has raised over $300,000 to create awareness and pay for speakers and programs at the U. At Wednesday’s party attendees will learn more about the initiative that is particularly focused on making younger generations more aware of the climate change story and issues ahead.

Swain has four children, seven grandchildren and 11 great grandchildren. He spent most of Sunday with family and he learned his grandkids have been writing to their representatives in Congress urging them to create better national policy. “The future is pretty bleak for my great grandchildren unless we get involved in more vigorous solutions,” he said. 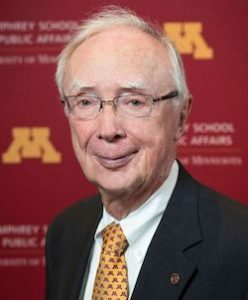 Swain grew up in Minneapolis and attended Washburn High School. When he was 17 years old his father vanished and no one ever learned what happened to him. Swain drove his dad to the Milwaukee Depot train station for a business trip to Madison, Wisconsin. That was the last he saw of a father who left behind a wife and four children. This was during the devastating U.S. Depression. Resourcefully, Swain’s mom became a successful life insurance agent at a time when women were mostly homemakers and less than 20 years after women were granted the right to vote in the United States.

Swain financed his education at the U by working in the Gophers’ ticket office. When he eventually earned the lofty sum of 50 cents per hour, he was supposedly one of only four students on campus rewarded that much for their jobs.

Swain loved Gophers football as a young man. While he was a student at the U, coach Bernie Bierman’s powerhouse teams won national titles in 1940 and 1941. Swain got to know the players, who were his peers at the U. His life changed, though, when he joined the Army Air Corps during World War II. In 1946 his military commitment ended and he was unsure of the path ahead.

Turned out his connections to the U Athletic Department opened a door for him. Athletic director Frank McCormick had heard complaints from football players that they needed assistance with school work. Swain became the first academic advisor for athletics at Minnesota. “It was my job to get them in school and get keep them eligible,” he recalled. “Now they got an army (of advisors) doing that.”

During his professional career Swain had 16 salaried positions. And with self-deprecation he said, “I had a lot of jobs, I couldn’t hold them.”

At age 75 he became an interim vice president at the U. Then at 83 he came back to campus with the same title, specializing in communications and government affairs. He’s been an advisor to presidents and athletics directors including Joel Maturi.

As a volunteer member of the athletics advisory board, Swain impressed Maturi. “Tom wasn’t afraid to speak his mind,” Maturi said Sunday. “He always did it respectfully but if he didn’t agree with you he said so. I’ve always respected that and admired that.”

Swain has known most of the Gophers athletic directors and he gave present AD Mark Coyle an endorsement, calling him “extremely capable.” These are challenging times for college administrators including at Minnesota. The financial hit because of the pandemic and other developments has caught Swain’s attention. “I hate to see some of the difficulties they’re experiencing now,” he said.

A longtime resident of Lilydale, the town decreed Sunday, July 4 as Tom Swain Day. At age 85 he was elected Lilydale’s mayor, succeeding a 91 year old in what Swain describes as a “youth movement.” He served two terms as mayor and is still on the town planning commission.

Politics has long interested Swain. He was campaign manager for former governor Elmer L. Andersen, who led the state in the early 1960s. Andersen served just one term, failing to be re-elected in a close election. Swain was charged with heading the Andersen recount effort and joked that some folks held him responsible for his boss becoming an ex-governor because he couldn’t find 91 more votes.

Since then he could certainly add more chapters.