I was in a Bloomington restaurant last Thursday awaiting two long time friends. Anticipating their arrival had me smiling in the nearly empty and quiet restaurant. I knew having lunch with Dick Jonckowski and John Justice would be a two hour “parade” of story telling and jokes.

To my surprise, they walked in with gifts. Dick loaned me a book celebrating the triumphs of the Boston Celtics, the storied NBA franchise boasting so many legendary players we admire. John owns Iron Horse Products and gifted a four-pack of root beer, cream soda and two bottles of black cherry.

Dick announced he and wife Arlene would celebrate their 55th anniversary on Friday. They planned dinner out at an Italian restaurant with son Jeff and daughter Jennifer. Ironically, Dick would have a PET scan that day, and then receive the results on Tuesday (tomorrow) whether he is cancer free.

This is his second fight with lymphoma and he requested a late lunch time Thursday because of a morning chemo session. He feels healthy and seems full of life. Short diagnosis is also this: the 77-year-old is still happy as a kid celebrating a birthday. Cancer can’t suck the happy-go-lucky out of him, and neither can diabetes. Despite a life long aversion to needles, he injects insulin into his body every morning.

John and Dick have been pals for almost 60 years. They met as ushers at old Metropolitan Stadium, working both Minnesota Twins and Minnesota Vikings games. At the restaurant the stories and memories started with those Met Stadium days of long ago.

At the Met both drove cars to transport relief pitchers from the bullpen located in back of the outfield fence to the pitching mound. A challenge with the assignment was the Twins’ Vic Power delighted in throwing small stones at the car from the dugout. “Me like to throw stones,” the Puerto Rican first baseman said in broken English.

Power was a smooth fielding, skilled hitter who belongs in the “MLB Characters Hall of Fame.” Power was also a flashy dresser and Dick recalled an encounter Vic had with co-Twins owner Thelma Griffith Haynes.

“You don’t look so hot yourself,” Vic responded.

John became friends with Power despite his fondness for chipping paint off the bullpen car. The two once sat in Power’s car in the Met Stadium parking lot waiting out a bomb scare that interrupted the game. Power used to pick up John at his house and drive them to Met Stadium.

There was no friendship, though, between Dick and Chicago White Sox reliever Dave DeBusschere. The two had an encounter during a season when a golf cart, not a car, transported pitchers. When DeBusschere was summoned out of the bullpen, Dick realized the golf cart engine was flooded and didn’t start.

“You dumb ass,” an angry DeBusschere said to Dick.

DeBusschere had to walk from the bullpen to the mound and then pitched poorly. He complained after the game he was tired and blamed the golf cart driver for his performance. “I had to walk in from the bullpen,” lamented DeBusschere, who gained fame as a starting forward on two New York Knicks NBA championship teams in the early 1970s.

John has called Dick “Jongo” for a long time. He derived the nickname from the character Mongo in the movie Blazing Saddles. Just seemed right. Call him “Jongo” or the “Polish Eagle” (longtime Philadelphia Eagles fan), or whatever, he has been making friends and making audiences laugh in Minnesota and other parts of the country since LBJ was in the White House.

John has developed a lot of relationships through the decades with Twin Cities career stops at places like the old Decathlon Club in Bloomington and Pepsi in Burnsville, but “Jongo” is special to him. Any friends as funny? “I can’t think of anybody even close,” John said. 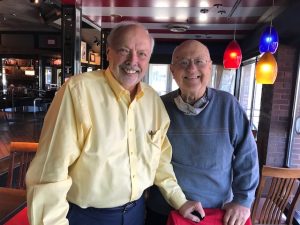 Dick was the longtime public address voice of Gophers baseball and basketball but paying the bills more through the years has been his public speaking and emcee work. The events gig started in 1965 in Ladysmith, Wisconsin where he emceed a beauty pageant. Years later he emceed a Carver County princess contest. Dick announced that instead of interviewing the contestants, they were to ask him questions.

The first young lady had a doozy, “Are you wearing any underwear, Mr. Jonckowski?”

In Dick’s early years he was befriended by the late Halsey Hall who was a master storyteller gifted with a gregarious laugh for the ages. Halsey was a sportswriter for the Minneapolis Star, broadcaster for the Twins and in his spare time worked the banquet circuit. He also enjoyed a cocktail or two or three, almost any day or time.

At a Monday night gathering for Minnesota sports fans years ago, Dick noticed Halsey was wearing a black shoe and a brown. He pointed this out to his mentor. Halsey was unfazed and replied, “I’ve got another pair like them at home.”

COVID has put a big dent in the emcee business but Dick’s phone is busy. Clients call and say, “We need a laugh, Dick. We gotta get you out here (to speak).”

And Dick can talk. He remembered an event in LaCrosse, Wisconsin where he told jokes nonstop for 90 minutes. That’s a lot of material and a lot of memory in his noggin, with some of it dating back to jokes told by classic comedians like Bob Hope, Red Skelton and Henny Youngman.

At our lunch Dick is giggling and telling one story after another including a joke that resonates with any parent whoever tried to persuade his son to get a haircut. The kid asks dad if he can use the car. Pops says okay, if the teenager will get his shoulder length hair trimmed. “But, dad, Jesus had long hair,” the son argues.

Then dad gets the final word, “Yes, he did and he walked everywhere.”

Nobody describes Dick as controversial but he has annoyed a few athletes over the years. At a golf outing Dick noticed a Minnesota sports hero (call him Tim) was completely inebriated. Dick told the crowd: “Here comes Tim’s foursome—him and his friends—Jack Daniels, Jim Beam and Johnny Walker.”

Dick has worked both sides of the media business as a radio host/sportscaster, and publicity man for the American Basketball Association Minnesota Muskies. High school teams could draw larger crowds than the Muskies who played at the old Met Center, home of the Minnesota North Stars.

The Muskies’ former publicity man loves to tell the story about a woman who called the box office inquiring about the starting time for that evening’s game. “What time can you be here?” replied the accommodating ticket seller.

ABA and NBA great Rick Barry first met Dick when playing with the Oakland Oaks. The two have remained friends and call each other on their birthdays. Dick’s b-day is October 22 and he refers to October as “the month of celebrities,” rattling off Mickey Mantle (October 20), Ricky Rubio and Vern Mikkelsen (October 21), and Johnny Carson (October 23).

If you haven’t caught on by now, Dick is not timid. Once he went to Milwaukee to watch his hero, Pete Maravich of the Atlanta Hawks, play against the Bucks. Dick was dressed in red, the Hawks colors, and he went on the court with no authorization or credential during team warm-ups. He greeted Maravich, who gave him a friendly hello. “He thought I was part of the front office,” Dick chuckled.

At a New Orleans Super Bowl he and Arlene crashed a Super Bowl victory party. “We’re walking down Bourbon Street and she said we can’t go in there. I said, sure we can.”

For about an hour the Jonckowskis mingled and enjoyed the hospitality. “Play like you belong and it works,” Dick said of his uninvited adventures. “Today (though) I might be arrested.”

As the pandemic eases, Dick will find his way back to a microphone more frequently. He is looking forward to entertaining at the annual Mancini’s St. Paul Sports Hall of Fame event June 14 where inductees will include Dave Winfield and Chris Weinke.

Count on Dick showing up with more stories than there is time for and filling the room with laughter. He is a believer in laugh and live longer.