Cornerback Richard Sherman, 32, has been an elite player during his NFL career and he becomes an unrestricted free agent later this month. The former All-Pro has the profile and experience to complement what otherwise is a young Minnesota Vikings cornerback roster.

A former NFL executive (familiar with NFC North teams like the Vikings) told Sports Headliners a veteran cornerback might be on Minnesota’s free agent shopping list. “Maybe they can negotiate a good deal with someone like him (Sherman),” the authority said.

The source mentioned offensive guard, defensive tackle and possibly cornerback as priority positions for the Vikings as they consider 2021 free agents and college draft choices. He would use Minnesota’s first round draft selection at No. 14 on Alabama defensive tackle Christian Barmore. “I think he would be a really good target for them,” he said.

Vikings fans weren’t happy with the defense last season, including the performance of the line. They certainly could welcome Barmore, a redshirt sophomore All-American who might have been the most dominant defensive tackle in college football last season.

The Vikings have 10 draft picks as of now and will pick up a couple more adding compensatory choices for players lost through free agency. With so many selections in the seven round draft, general manager Rick Spielman will be doing a deep think on how he can better the club’s future. “I am sure he’s going to be moving around (trading picks and perhaps veterans). He always does,” said the authority who asked that his name not be used.

Mock drafts have several quarterbacks dominating the first 10 selections of the opening round but the NFL source wouldn’t use the Vikings’ draft collateral to move up to select a replacement for starter Kirk Cousins. “I think he’s good enough to win with,” he said. “Certainly they need someone long term to draft (at QB). I wouldn’t go in the first round (this year) and get one of those (college) guys. Maybe (get a) third round type of quarterback. You can find really good players in the third and fourth rounds (Russell Wilson, Dak Prescott are prime examples).”

The source considers Cousins a top 15 NFL quarterback, maybe even first 12, and questions the credibility of speculation the Vikings are interested in trading him. That’s partially because he sees Cousins as a potential winning piece directing an offense with playmakers like running back Dalvin Cook and wide receivers Justin Jefferson and Adam Thielen. Also, the Vikings have salary cap issues and would have unwelcome “dead money” allocated against them if they moved the veteran quarterback.

The NFL has yet to establish the final salary cap number for franchises but it could be $185 million per club—a figure that has Vikings management crunching numbers. Minnesota is unlikely to franchise tag a player like last year when safety Anthony Harris received $11.4 million. With that deal expiring soon, he might be among players released in the coming weeks as the Vikings try to create “wiggle room” with the cap and the ability to chase free agents, perhaps including Sherman. Other Vikings could be headed toward restructured deals, with that looking like the direction for offensive tackle Riley Reiff.

The Vikings were 7-9 last season after playing most or part of the year without the following key defensive personnel: end Danielle Hunter, tackle Michael Pierce and linebackers Anthony Barr and Eric Kendricks. “It’s a whole different deal if those guys were all there,” the source said. “I don’t think there’s any question that they would have been a playoff team… .”

Spielman will meet with the media via Zoom today to discuss the offseason.

There was preliminary discussion between the Gophers and Minnesota Twins prior to the pandemic about establishing a high tech pitching lab on the University of Minnesota campus. Gophers coach John Anderson told Sports Headliners such a facility could help pitchers to not only improve performance but prevent injuries. 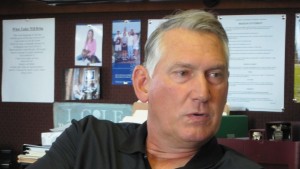 The expertise of sports science and kinesiology authorities at the U are part of what makes the idea of a pitching lab intriguing. Anderson said the Gophers and Twins have an ongoing successful relationship and are always interested in projects that will enhance baseball in the state.

Anderson is in his 40th year leading the program and has 1,325 wins. That’s the best in Big Ten history and he can start adding to the total when the Gophers begin their season Friday at U.S. Bank Stadium. Minnesota has games Friday, Saturday and Sunday against Indiana and Rutgers.

The pandemic cut short the season in 2020 and the Gophers’ overall record was 8-10. Anderson has seven positional starters back from last year’s team whose season ended March 11. He believes the Gophers “have enough talent” to achieve a winning season playing a schedule of Big Ten opponents only and no Big Ten postseason tournament.

Anderson will be without Max Meyer who was drafted last season by the Miami Marlins and could eventually join Glen Perkins as the two best pitchers he has coached. Already one of baseball’s top prospects, Anderson believes Meyer has the “stuff” to have a long MLB career.

Longevity will require continuation of a healthy right arm. “We didn’t over pitch him at Minnesota,” Anderson said. “We protected him and didn’t overuse him.”

At Woodbury High School Meyer weighed only about 165 pounds but at Minnesota he physically matured and benefitted from weight training. Analytics and other tools helped the 6-foot right hander improve, too. At Minnesota he developed a fast ball clocked at three digits to complement a slider he was using since high school. “He touched a couple hundreds in the short season we had in 2020,” Anderson said. “Quite a jump that he made.”

When Marcus Carr totaled 41 points against Nebraska last week he came within two points of breaking the men’s single game scoring record for Gopher players. Eric Magdanz and Oliver Shannon each scored 42 points in a game. Carr’s 41 moved him into a tie in the record book with Andre Hollins.

Two Minnesota natives and former Gophers are on the WCHA 2000s All-Decade team announced by the Twin Cities-based league Tuesday. The team includes defenseman Jordan Leopold from Golden Valley and forward Johnny Pohl of Red Wing. Others on the team are forwards Peter Sejna and Brett Sterling, both from Colorado College; defenseman Matt Carle of Denver and goaltender Brian Elliott of Wisconsin.

All-decade teams this winter are part of the league’s 70-years celebration.

Maurice “Mo” Forte, believed to be the first ever African American assistant football coach of the modern era with the Gophers, died last Friday in Pine Bluff, Arkansas. Mo, a native of Hannibal, Missouri, was an outstanding running back for the Gophers in the late 1960s before becoming an assistant at Minnesota from 1970-1975. His coaching career included the head job at Arkansas-Pine Bluff and assistant positions at major colleges and with two NFL teams. His 74th birthday would have been last Monday. Condolences to his family and many friends across the country.

Dr. Joel Boyd, recognized as one of the top knee surgeons in America and Minnesota Wild team physician since the franchise’s inception, will be the guest speaker for the Twin Cities Dunkers March 10.