Jamal James of Minneapolis is the No. 5 ranked middleweight by the WBC and is positioned for more notoriety. He headlines the July 13 pro boxing card at the historic Minneapolis Armory that will include nationally-televised bouts. 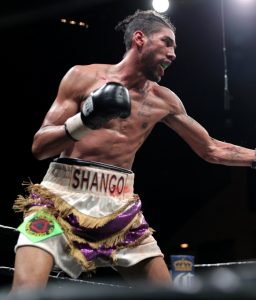 James fights in both the welterweight and middleweight divisions. His bout with DeMarco is listed as a welterweight matchup, but middleweight is where he could make an even bigger name for himself. A local boxing insider emailed this prediction about James: “…Definitely in the global conversation for a title fight.”

The middleweight division is loaded with talent including WBA title holder Manny Pacquiao, 61-7-2. He fights Keith Thurman, 29-0, next month. IBF, WBO and WBC are other organizations where James might have a path to title opportunities.

Professional boxing has found a home at the Armory and continues to generate awareness in this marketplace. The building was once the site of Minneapolis Lakers and city high school basketball games. Renovated now and being used for corporate events and entertainment, three previous boxing cards have attracted announced attendances of 3,149, 3,320 and 3,417.

Al Haymon’s Premier Boxing Champions is the promoter for the July 13 card. PBC fights are seen on Fox and FS1, with recent cards being watched in approximately 1.5 million homes.

Boxing has been struggling for decades to regain its foothold with the American public. In the first half of the 20th century boxing was one of the most popular sports along with baseball, horse racing and college football.

The Minnesota Wild’s 2019-20 regular season schedule was released today. The Wild opens the season in Nashville on October 3, the first of three straight road games. Minnesota has its home opener on October12, hosting the Pittsburgh Penguins at Xcel Energy Center. The Wild plays 17 of its first 26 games of the season on the road (October 3 thru November 30). The nine home games in October and November are the fewest in franchise history.

Charlie Danielson, the 25-year-old Osceola, Wisconsin native accepted a sponsor exemption into the 3M Open today. The Illinois alum and 2016 Big Ten Player of the Year recently qualified for the U.S. Open. The new PGA Tournament begins next week at TCP Twin Cities in Blaine.

The Twins, who split four games on the road with the Royals in their most recent series, hold the No. 3 spot in yesterday’s Yahoo.com power rankings of MLB teams, trailing the No. 1 ranked Dodgers and No. 2 Yankees.

Cbssports.com dropped the Twins from No. 2 to No. 3 in its rankings that came out yesterday. The Yankees are first, the Dodgers second.

The Twins, who start a home series tonight against the Rays, are celebrating the 50th anniversary of the first moon landing by displaying a full-sized statue of Neil Armstrong’s Apollo 11 spacesuit at Target Field. The statue is accessible to all fans, and is located outside the Bat & Barrel entrance on the Delta SKY360° Club level.

A Forbes.com June 11 article lists the top 100 wealthiest athletes in the world, with $25 million the cutoff figure to be ranked. Lionel Messi, with $127 million in earnings in the last 12 months, leads the list. He is followed in the top 10 by Cristiano Ronaldo, Neymar, Canelo Alvarez, Roger Federer, Russell Wilson, Aaron Rodgers, LeBron James, Steph Curry and Kevin Durant. The top three in earnings are all soccer players, followed by boxer Alvarez.

The Timberwolves’ Andrew Wiggins is No. 91 with a reported $26.1 million in pay. He is the only Minnesota athlete to make the list.

Romain Metanire, the Minnesota United defender who will play in the July 31 MLS All-Star Game in Orlando, reportedly earns $305,000 in base salary, according to multiple news sources.

The United has seven of its next 10 matches in St. Paul at the much acclaimed Allianz Field that includes the Brew Hall with its many local beers. Unlike soccer venues in Europe, fans fan consume beer in the seating areas at Allianz.

Ex-Gophers Amir Coffey and Jordan Murphy will have tryouts respectively with the NBA’s Clippers and Timberwolves. They could eventually play in the NBA’s development league. During the 2018-19 season, players with G League contracts earned base salaries of $7,000, or $35,000 for five months.

Prior Lake five-star forward Dawson Garcia continues to attract impressive scholarship offers, with news yesterday Kansas hopes he will be part of its 2020 recruiting class.

Gophers’ football marketers are trying to improve ticket sales in 2019 after last season’s announced average attendance of 37,914 for seven home games. That figure was reportedly the lowest since 1992. Season tickets in 2019 are offered for as low as $35 per game. Mini-plans starting at $60 (three games) went on sale yesterday.