Bob Lurtsema, the former Minnesota Vikings defensive lineman who remains a close observer and loyalist to the franchise, predicts a mediocre team record in 2021 and possible end to the Mike Zimmer-Rick Spielman era. “I think both their jobs are on the line,” Lurtsema told Sports Headliners.

This is Zimmer’s eighth season as head coach, while Spielman is in his 10th as GM and 16th as a front office personnel executive with the club. The Vikings have won only three playoff games in the last 16 years and the team missed the playoffs last season after a 7-9 regular season record.

Minnesota has been inconsistent under Zimmer, who in his only NFL head coaching assignment has often earned praise for his defensive savvy. Two times the club has won NFC North Division titles and twice finished second, but four times hasn’t qualified for the playoffs. Spielman earns credit for many savvy draft choices but in the last several off-seasons he’s been unable to fix the offensive line, and he has critics of his quarterback choices over the years—from first-rounder Christian Ponder in 2011 to the mega contract he committed to current QB Kirk Cousins.

Lurtsema particularly scrutinizes Viking offensive and defensive linemen, and wonders why some of them were acquired. “What are they doing?” Lurtsema said about the front office.

He labels the footwork of some defensive linemen as “terrible.” The Vikings were supposed to have fixed their defensive line in the off-season and maybe they have but Lurtsema didn’t like the lack of aggressiveness he watched in the preseason. “If you catch the contact, rather than initiate it, you’re really losing that six to eight inches (of space and advantage) which you’re fighting for all the time on the defensive and offensive line.”

Minnesota’s offensive line is the most suspect unit on the team going into the season opener Sunday, September 12 at Cincinnati against the Bengals. All the starters were on the roster last season when the collective results were lacking. Except for right tackle Brian O’Neill, the other regulars are judged mediocre at best.

Powerful, fast and elusive running back Dalvin Cook, a second round steal by Spielman in 2017, is so talented he can make his line look better than it is. “He can do it on his own,” Lurtsema said of the man he considers team MVP.

Lurtsema’s hope is the offensive line can improve its performance and make Cook’s running production even better. An opposing defense almost completely trying to contain the Viking run game results in minimal pass rush. “Then the sky’s the limit for Cousins and (Justin) Jefferson and a healthy Adam Thielen,” Lurtsema said about the team’s QB and top wide receivers.

Through the years Lurtsema’s predictions of Minnesota’s final win-loss record has been impressive. What’s in the crystal ball for this season? “If they’re .500, that’s about as high as I would go with them,” he said about 2021. “I am hoping for a lot better, of course.”

Lurtsema deliberated between forecasting 8-9 or 9-8 records, before going with the latter because it sounds more positive. “I love Zim—okay—but his job is on the line. He goes 8-9, he’s gone. He has got to have a winning season.”

If there is a losing season, what about Spielman? “I would say he should lose his job, too,” Lurtsema said.

In Sports Illustrated’s football preview issue out last week the magazine also predicts a 9-8 record for the Vikings. Neither Lurtsema nor S.I. sees Minnesota qualifying for the playoffs.

In a best case scenario for the Vikings, S.I. writer Gary Gramling sees the defense regaining its elite status of 2019, with Jefferson being even better than his sensational rookie season and Cook earning NFL Offensive Player of the Year. Worst case: the defense doesn’t regain its magic, “veterans look old,” newcomers are green, and too often the offense is playing from behind while forcing Cousins to pass too much and thereby neutralizing Cook.

S.I. forecasts NFC North rival Green Bay easily winning the division with a 13-4 record. Former Vikings offensive coordinator Kevin Stefanski, going into his second season as head coach of the Cleveland Browns, wins the AFC North with a 12-5 record and advances in the playoffs to the AFC Championship game, per the magazine. The Browns lose to the Kansas City Chiefs who go on to defeat the Los Angeles Rams in the Super Bowl.

The last time the Golden Gophers defeated Ohio State at home was in 1981, winning 35-31 with a pass-happy offensive scheme led by Minnesota head coach Joe Salem. The Buckeye defensive backs coach was Nick Saban. In an email to Sports Headliners, Salem’s son Brent passed along this quip from Joe: “It looks like coach Saban has bounced back from that one!” 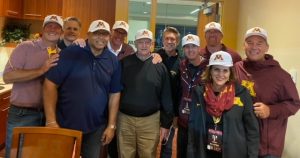 Joe, 83, and players from the 1981 team enjoyed a reunion at last Thursday night’s Minnesota-Ohio State game at Huntington Bank Stadium. U president Joan Gabel and athletic director Mark Coyle welcomed the group (see photo with Joe in the middle).

As college coaches, administrators, governing bodies and athletes across the country decise how best to make the Name, Image and Likeness opportunity work best for all concerned, prominent Minneapolis attorney Marshall Tanick has ideas worth a look. He suggested in an opinion page letter to the Duluth News Tribune that college athletes who receive compensation for NIL could be required to publicly disclose details through a certification process and thus provide more transparency then is currently in place.

“As part of that process, they would be required to report any compensatory earnings, which would then be deducted from any scholarship or other financial aid or benefits furnished to them by the schools, or reimburse the institutions for what has already been provided to them. …It makes sense that, if these athletes are to use university-provided forums for their financial gain, they should be accountable for the benefits they receive from the schools,” Tanick wrote.

The Tampa Bay Rays, among American League favorites to win the pennant and advance to the World Series, have scored eight or more runs in 20 of 39 games since acquiring DH Nelson Cruz July 23 from the Minnesota Twins.

Minnesota prep legend Ron Stolski will be honored at a retirement celebration from 2 to 5 p.m. October 9 at the Northern Pacific Center in Brainerd. The Minneapolis native devoted 58 years to football coaching, with much of his career at Brainerd High School. No gifts are requested but donations for the Ron Stolski Scholarship Fund (part of the Brainerd Public Schools Foundation) are welcome. There is no cost to attend the event.

Stolski, who retired with 389 wins, will also talk to the CORES luncheon group Thursday at the Bloomington Event Center. In addition to coaching, he has served as the executive director of the Minnesota Football Coaches Association since the organization’s inception in 2006. For more information about the luncheon and program, contact Jim Dotseth, dotsethj@comcast.net. Reservations must be made by Monday, September 6. CORES is an acronym for coaches, officials, reporters, educators and sports fans.