Minor Treasures is a new book from Nodin Press in Minneapolis that will provide any Minnesotan interested in Millers and Saints history a detailed account of Twin Cities minor league baseball history. Authors Stew Thornley, Taylor Simons and Dave Kaplan write about the Minneapolis Millers and St. Paul Saints from their origins, offering an array of interesting names and tales with a background of vintage photos and illustrations.

Now is a nostalgic time to peruse the soft-cover book because for decades an annual ritual of summer was watching the Saints and Millers play a double header on the Fourth of July. It was known as a street car series, with fans attending games in each city on Independence Day. For more than six decades there was a cross-river rivalry between the two franchises, with much of it focused on the street car matchups of doubleheaders played on Memorial Day, July 4th and Labor Day. 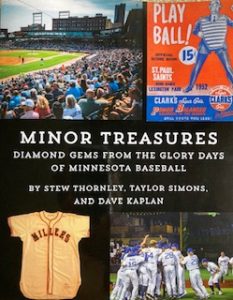 Legendary players wore the uniforms of the Millers and Saints including many who are honored in baseball’s shrine at Cooperstown, New York. Willie Mays, arguably the game’s greatest player ever, played in Minneapolis for part of a season in 1951. Minor Treasures profiles the “Say Hey Kid” and includes a photo of the home on Fourth Avenue that Mays rented and still stands near the Hosmer Library.

For many readers a surprising name on the book’s pages will be Fidel Castro, the Cuban dictator who seized power in the late 1950s. Castro was a baseball player in his youth and to say he took an interest in Havana’s Junior World Series against the Millers is an understatement.

The Junior World Series was a Triple-A showdown between teams from the American Association and International League. In the postseason playoffs of 1959 the AA Millers and IL Havana Sugar Canes advanced to the Junior World Series. Castro attended all the games in Havana and so did his henchmen. Minor Treasures described the atmosphere: “Nearly 3,000 soldiers were present, many lining the field, while others stationed themselves in the dugouts, their rifles and bayonets clearly evident.”

The book makes clear that this was a series about more than competition on the field. Politically motivated intimidation was a dark presence as described in Minor Treasures:  “As Millers centerfielder Tom Umphlett entered the dugout after making a catch to end an inning, a soldier made a slicing motion across his throat. Umphlett and the other players clearly understood the message.”

The Millers forced a series deciding game seven in Havana. Minor Treasures writes that Castro walked by the Minneapolis bullpen before the game, patted a large revolver on his hip and declared: “Tonight, we win.” And that’s what the Sugar Canes did, scoring the final run in the bottom of the ninth inning to win 3-2.

Minneapolis manager Gene Mauch offered the postmortem with this quote in the book: “Our players were truly fearful of what might happen if we won. But we still tried our hardest, figuring we’d take our chances if we did win.”

Twins front office boss Derek Falvey and manager Rocco Baldelli are in communication before and after each game. Falvey told Sports Headliners the conversations are part of their routine “because that’s the way our partnership works here.”

Falvey said he thinks outside perceptions about those conversations might be of “some secret vault meeting,” or involve lineup meddling by him. “…I will say this to the end of my career. I’ve never written a lineup in my life and I don’t really want to, and I don’t plan to,” he said.

Pregame meetings (10 or 15 minutes) between Falvey and Baldelli include medical updates about players. Falvey said Baldelli likes to “bounce ideas off” him and others in the clubhouse about personnel but the manager makes the final call on details like “where he is going to hit guys” in the lineup. The pregame chats, Falvey, added, don’t even merit “formal meeting” status and may include non-baseball subjects like European football, a Baldelli favorite interest.

Post game is a short meeting and can focus on the bullpen and whether there is a need for a call up. Injuries, illness or tired arms can prompt roster changes including help from the Triple-A St. Paul Saints. “We usually check in for a short five-10 minutes postgame just to make sure we didn’t miss anything on the roster,” Falvey said. “We rarely break down (for example) what happened in the seventh inning unless it’s something meaningful and he wants to talk about it. …

“It’s truly a partnership (with Baldelli, including their meetings). He makes the decisions on the team. Who plays, where they play, what pitching moves they make. That’s all the manager. It’s always been that way for me and everywhere I’ve been in my career. My job is to try and help support him and thinking through those things. …”

Assistant coach Dave Thorson told Sports Headliners his background with head coach Ben Johnson gives him a special understanding about his younger boss. Thorson, going into his second season as a Johnson assistant coach on the Gophers men’s basketball team, has known Johnson since he was in sixth grade.

Then, of course, Thorson coached Johnson at DeLaSalle High School. “I think the neat thing for me is because I understand him, I can help him in a way that may be different than anybody else.” Thorson said.

With a remade roster assembled on the fly, the Gophers struggled last season with a 4-16 Big Ten record, but Thorson describes Johnson as a “star in the making.” More observers could feel that way if Minnesota, with better talent now, improves significantly next season and earns its way into the NCAA Tournament.

The latest issue of Sports Illustrated includes a feature on Chet Holmgren whose 7-foot versatile skills are earning him the “Unicorn” nickname and a nation-wide following after the Oklahoma City Thunder made him the No. 2 selection in last month’s NBA Draft. The former Minnehaha Academy prep All-American was coached by Larry Suggs in AAU basketball. “I wanted to make Chet the best American-born white basketball player since Larry Bird,” Suggs told Sports Illustrated.