The coming days offer the opportunity for Minneapolis to brighten its image locally, regionally and nationally. The NCAA Women’s Final Four starts Friday and the event can help the city rebound, even if it’s only an incremental improvement that chips away at Minneapolis’ infamous reputation for crime. 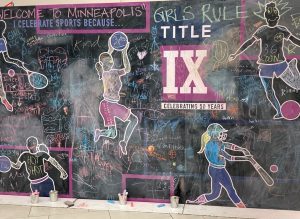 Celebration graphic at Mall of America

After Friday night’s two semi-final basketball games at Target Center, the national championship game will be played Sunday evening. While the games are the centerpiece, event organizers are serving up a lot more to celebrate the 40th anniversary of the Women’s Division I Final Four and 50th anniversary of Title IX.

There will be free interactive events and attractions for the public to enjoy, and in place are partnerships with community organizations for social initiatives such as honoring Native Americans. Buildings will light up the skyline in the colors of the Final Four logo, helping to create further awareness the Final Four is in town.

The games will be televised nationally by ESPN, with over 350 radio stations broadcasting too. Over the weekend there will be continual Final Four coverage and commentary on various platforms ranging from newspapers to social media. And about 30,000 visitors are expected from out of town, with many staying in downtown hotels.

Wendy Blackshaw and Debbie Estes, co-chairs of the Minnesota Local Organizing Committee, have said “all eyes” will be on Minnesota in coming days. They and others involved with the Final Four, including hundreds of local volunteers, have worked diligently to make the event a success in every way. Positive expectations are this latest venture will fall in line with the many other highly lauded events the city and region have hosted over the years including Super Bowls, All-Star games, elite golf tournaments and Final Fours.

There will be extensively planned security and safety protocols that hopefully allow the 2022 Final Four to go on without major incidents. But fairly or not, it only takes one or two incidents to prompt main stream media headlines, or at least start a chain of negative comments on social media.

The city’s longstanding image of being a safe place to live, work or visit has taken a beating the last couple of years. The latest headlines include carjackings, a crime trend sweeping the metro area. Just last week Fox was reporting on Minneapolis and its carjacking problem that flies in the face of “Minnesota nice.”

Twin Cities sports anchor and reporter Mike Max in February referred to Minneapolis “as a hellhole.” His remarks on WCCO Radio were in part prompted by the cold weather and pandemic, but more to the point he referenced the crime downtown and unpleasant encounters he has experienced.

In late January Lance Morrow wrote a poignant article for the Wall Street Journal. In August of 1973 Morrow had authored a cover story for Time magazine praising how Minnesota is “the state that works.”

The headline for his WSJ story: “How Minnesota Went from Tom Sawyer to Huck Finn.”

In Morrow’s 2022 story he quoted a friend who lives in Minneapolis. “It would be difficult to exaggerate the extent of violent crime throughout the city. Everyone now knows someone who’s a victim.”

Morrow wrote about how the Twin Cities have become part of the rank-and-file urban mess characterizing big cities throughout the country—crime (often violent), drugs and unemployment. The once idyllic state of Minnesota and its largest city have “become a microcosm of an America in crisis,” the WSJ opinion piece said.

This writer is alert in the city like never before. When my car stops at intersections, I am aware of who is near my vehicle and what their intentions may be. I am more likely to park at a meter or in a ramp close to my destination, rather than opt for the exercise of a healthy walk. When on foot I am almost as likely to look behind me as ahead. The city’s reputation puts me on edge and has altered or cancelled plans to go places.

Those words are painful to report. Although I live in a suburb, I spent 30 years in Minneapolis and was raised to be proud of a city that once offered a school system and quality of life rivaling the great urban centers of the world.

Keep your head up, though. Things will improve.

People are returning to downtown. They are also not abandoning Uptown, an upscale area for decades and another place of past city pride. Larger numbers of people on city streets, whether shopping, attending events or going to work, are a major deterrent to the low-lifes who act without regard for authority, life and property.

The thugs that have bullied Minneapolis will not take it over and neither will the so-called leaders and authorities with cockeyed ideas and policies. Minneapolis remains a city with good people and intentions. And amenities that have long made it special remain in place, including the beautiful lakes and parks, and the world-class arts, theatre, sports and shopping.

It will take a couple of years but the city police force is being increased in numbers and will have improved training. There are worthwhile ideas to be considered in lessening burdens on police and making other authorities responsible. The last election brought needed change on the city council including the leadership of Michael Rainville who represents the Third Ward and part of downtown.

Positive change can spiral in city hall, on the streets, in the schools and in court rooms. And how inspiring if responsible changes started in homes where too many households have no fathers, and or any parents at all. Accountability starts at home with adult supervision.

The Women’s Final Four will return to Minneapolis and Target Center for the first time since 1995. While times have changed, this is still a place with much to offer and “Minnesota Nice” cemented into the DNA.