Golden Gophers basketball coach Richard Pitino made a couple of predictions after last night’s upset win over Purdue that Minnesotans will like.

The sixth-year coach believes the late season victory over No. 11 ranked Purdue should propel his team to an NCAA Tournament invitation. During a jubilant on-court postgame celebration at Williams Arena, he also told the crowd the jersey of senior forward and rebounder extraordinaire Jordan Murphy will one day hang in the building’s rafters with those of the program’s other greatest players.

“That jersey will be up there in no time,” Pitino said while speaking on a microphone to the fans.

The 73-69 win over Purdue was one of the most entertaining and important victories of the Pitino era. With “background noise” from critics about Pitino’s coaching future, the Gophers added to a resume that also includes impressive victories against the likes of Iowa, Washington and Wisconsin. They may have clinched a tournament invite in Dinkytown last evening.

Minnesota is 19-11 overall, 8-10 in Big Ten games. The Gophers finish the regular season Friday night at Maryland, and then join their other league rivals at the Big Ten Conference Tournament in Chicago next week. Minnesota’s NCAA Tourney chances look a lot less precarious after last night, with national bracketologists likely to forecast in coming days that the Gophers will be part of the 68-team field announced on Selection Sunday, March 17.

Pitino, whose career record in Big Ten regular season games is 40 wins and 69 losses, told the crowd he “can’t wait to be in the tournament.” If the “Big Dance” is Pitino’s destination for the second time in three years, he can begin writing thank you notes to Murphy and junior guard Amir Coffey. 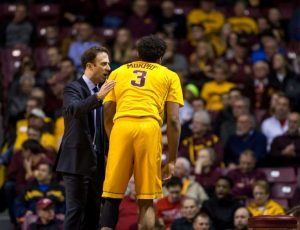 Murphy ranks second all-time in career rebounds in the Big Ten (1,262), behind Ohio State’s Jerry Lucas (1,411). Earlier this week he was fifth nationally in rebounds per game with a Big Ten-best 11.7. He was second in the NCAA with 19 double-doubles and holds the Gopher career record with 65.

Murphy, a San Antonio native, was going to attend VCU but a coaching change had him reconsidering his options in the spring of 2015. The former Texas All-State player chose Minnesota and Pitino knew he had a potentially important player.

“I thought he’d have a good career,” Pitino told Sports Headliners before the game. “I didn’t think statistically he would do (all) this.”

Murphy has been an impact performer from his first season when he averaged 11.6 points and eight rebounds. A determined attitude has characterized his play from day one. “His mentality was phenomenal. He was ready to go right away,” Pitino said.

Last night Murphy moved into sixth place all-time on the Minnesota career scoring list. His low-post production is a signature part of his game that has led to his points total. Durability is also a big reason for his record setting play. “I don’t think he’s ever missed a practice,” Pitino said about his power forward who has played in every game during his career.

Murphy added another double-double last night with 13 points and 14 rebounds, while Coffey showed again why he is Minnesota’s leading scorer, most versatile player and a possible NBA draft choice later this year. The junior has joined Murphy as one of the Big Ten’s best players and last night his new found aggressive play resulted in 32 points and eight rebounds.

His passionate style, including slashing to the basket, helped earn him 18 free throw attempts. He and other Gophers took turns defending star Purdue guard and scorer Carsen Edwards, who made only seven of 31 field goal attempts.

On Senior Night emotions were high even during a pregame ceremony to honor Murphy, Dupree McBrayer, Matz Stockman and Brock Stull. Those emotions built from there during a game that Minnesota received help from all of its seniors including a not to be forgotten performance by Stockman, the 7-foot center who had been averaging 9.6 minutes per game and 2.7 points.

McBrayer had 10 points, and while Stull had only four points in 22 minutes, his all-around play in the guard rotation was solid. Stockman had the game of his Gopher life, including coming up with a steal that had him in the open court before being fouled. That was part of his impact on defense but even more impressive were seven blocked shots. He had a tension-busting dunk in the game, too, and finished with seven points in 24 minutes of heroic work in the absence of key reserve and center Eric Curry who as of this week is out for the season with a foot injury.

The student section teased Stockman with chants of “MVP! MVP!” The 24-year-old journeyman, who started his college career at Louisville after growing up in Norway, was also honored with the Gophers’ Heart of the Game award.

Who would have thought the team’s four senior players would all contribute so much to the win? “Their seniors played great,” Purdue coach Matt Painter said.

A roaring and sometimes adoring crowd played a role in the win, too. It was Williams Arena magic reborn—and maybe influenced the officiating. The Gophers had 36 free throw attempts and made 27. The Boilermakers had 18 attempts and made good on just nine. “You get more calls when you’re at home,” Painter said with minimal emotion.

The emotion was mostly on Minnesota’s side last night.