This week the University of Minnesota men’s basketball team has its first summer practice with coaches. Last week was orientation with activities that included new players moving into their residences, but now it’s time to get on the court with coach Ben Johnson and his staff.

Thorson, who was a U assistant from 1990-1994, was asked during a telephone interview for a brief comment about each of the players. His answers included individual references to a “junkyard dog” and a “matchup nightmare.” Team comments included this is a roster with the size and athleticism to play different roles, providing the Gophers with versatility.

Junior forward Jamison Battle, last season’s leading scorer at 17.5 points per game (sixth in the Big Ten): “High IQ basketball player. Skilled due to the diligence he has at working at his game. I think only scratching the surface on what kind of player he can be.”

Junior forward Parker Fox: “Incredible spirit and love for being a Gopher and playing. I can’t wait for the fans to see that. A highlight machine in the making.”

Sophomore forward transfer Dawson Garcia who was an impact player in prior college seasons at Marquette and North Carolina: “Extremely talented and skilled face-up (to the basket) threat. Matchup nightmare (at 6-11, 235 pounds) and hard playing dude. Another guy I can’t wait to coach.”

Freshman guard-forward Jaden Henley: “Extremely versatile. A big, long guard that does a little bit of everything. Another guy that I think brings versatility…that is going to make us tough.”

Junior forward Isaiah Ihnen: “Fought back from adversity in terms of the injury (knee). …Has really worked on his shot—and a guy that I think is going to present all kinds of trouble defensively because he can defend both perimeter and inside players for us. … You’ll see a different version of him than what you remember from him two years ago.”

Freshman forward Josh Ola-Joseph: “Oh my, I love him. He’s a junkyard dog; plays so hard. He finds a difference to make a difference on the court. … Just how hard he plays. He’s another Gopher that is going to be fun to watch.”

Freshman forward Pharrel Payne: “Pharrel, he is a beast (athleticism at 6-9, 230). He is a physical (guy). He reminds me of John Thomas (former NBA first rounder) who I recruited to the U in the ‘90s. I don’t want to put too much pressure on Pharrel but when I watched him play, every time I watched him I thought John Thomas. So that should tell something about what I think is in store for his future.”

Sophomore guard Jackson Purcell: “Another really high IQ player. He’s one of those guys that bring something to the table for us that doesn’t always show up in the stat sheet. You know once he got cleared (from injury) so that he could practice with us, he was a key guy in terms of practicing against and doing things of that sort. …”

Junior guard Will Ramberg from way up north Grand Marais: “I don’t know if he wants me to call him an Iron Ranger, but he’s a hard playing guy. In the opportunities that he had last year, he made a difference. …He’s a guy you can count on, no matter what the situation.”

Fifth year Dartmouth guard transfer Taurus Samuels: “He’s a heady point guard. He’s going to bring a lot to the table in terms of how he attacks in a ball screen. He just understands how to play. I love his pace and I love his attitude about the game. So another guy I think that Gopher fans are going to love to see.”

Sophomore center Treyton Thompson: “Man, has he worked hard. I think the neat part about Treyt is that you look at this 7-footer and yet he is…a stretch guy (big man who can play outside). He can face up and make threes—and he’s really worked hard on getting stronger. So I think Treyton’s best basketball is ahead of him.”

Knee injuries to Fox and Ihnen sidelined them for the entire season of 2021-2022. That lessened the talent and depth on a roster already fragile from the transition to Johnson about 15 months ago after head coach Richard Pitino was fired. Ihnen is the only remaining player Pitino and his staff coached.

“Yeah, we’re looking forward to having a full team for the first time since we’ve been here,” Thorson said. 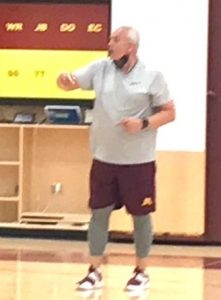 The Gophers’ Big Ten record last season was 4-16. Minnesota and Nebraska tied for last place. For most of the winter the Gophers weren’t even a consideration for making the NCAA Tournament field. “Our goal always is to make the NCAA Tournament,” Thorson said.

He also said the Gophers didn’t have the depth to compete for the tourney last season. “You know without question we want to field a team that on any night, if there is a Big Ten contest, that we have a chance to win. So I think that is (also) what our goal is.”

Johnson has one remaining scholarship he could use for an additional player this summer. “I think recruiting is like shaving, you gotta do it everyday,” Thorson said. “Try to keep your focus on and open.

“In all likelihood we probably won’t add anyone but you just gotta keep your eyes and your ears open because that’s just the way the basketball world works sometimes. So again, we’ll see.”