Gophers Need a Lift at Quarterback

It’s time for the University of Minnesota football coaches to consider replacing Tanner Morgan at quarterback. A struggling Morgan has been too inconsistent this season and he faltered again yesterday in Minnesota’s 27-22 loss to Iowa.

With the Gophers leading 13-10 early in the third quarter, Morgan’s sideline pass to an open Chris Autman-Bell was too high, and the errant throw cost Minnesota a third down conversion. The Gophers punted to Iowa and the Hawkeyes scored on a 72-yard touchdown pass on their first play to take a lead they never gave up in the battle for possession of Floyd of Rosedale.

Gophers coach P.J. Fleck said at his postgame news conference the timing of the throw was early. “That was a critical play in the game,” said Fleck who is now 0-5 in the border rivalry with Iowa.

Morgan’s passes were off-target throughout the game, including balls that just sailed beyond his receivers. He completed 14 of 30 passes for 183 yards including a 68-yard strike to Autman-Bell for a fourth quarter touchdown.

Morgan had multiple near interceptions in the loss that knocked the Gophers out of a four-way first place tie in the Big Ten West Division. A short quarterback by Big Ten standards, Morgan’s passes are frequently tipped by defenders rushing toward him with raised hands in the air.

After the Gophers scored late in the fourth quarter on the Autman-Bell pass, they trailed 24-22. That set up a two-point conversion attempt where Morgan rolled to his right and threw toward the end zone only to have his pass knocked down.

In the closing minutes, behind by two points, Morgan and the Gophers had opportunities to change the score. Not a playmaker with his legs, Morgan couldn’t create extra yards, or time to throw the ball, when plays broke down.

It wasn’t just the quarterback who was inconsistent in the passing scheme. The receivers dropped too many passes, or didn’t make difficult catches, or even get open. That kind of performance has been another flaw in the Minnesota offense this season. The Gophers have nowhere near the receiving talent of two years ago when Morgan was so impressive throwing to all-conference playmakers Tyler Johnson and Rashod Bateman.

“You’d like to be able to see more completions, that’s for sure,” Fleck said. “Too many drops.”

The coaching staff’s responsibility is to provide more capable receivers than Minnesota has shown. That has to be considered a recruiting failure and it’s uncertain how the receiver roster gets fixed in the offseason. 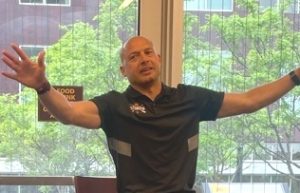 The Gophers, 6-4 overall, 4-3 in Big Ten games, have remaining games at Indiana and home against Wisconsin. Then there will be a yet to be determined bowl game. Morgan is a wonderful person, terrific leader and outstanding game manager, but the present circumstances and timing provide an opportunity for a shakeup at quarterback.

Fleck has four scholarship quarterbacks behind Morgan who to his credit has helped win a lot of games since becoming the starter after the 2018 season was underway. Two of them, redshirt junior Zack Annexstad and redshirt sophomore Cole Kramer, have game experience.

Annexstad lost his job to Morgan in 2018 after he was injured. Annexstad has started seven games for Minnesota and has a stronger arm than Morgan. Kramer has been effective in the wildcat formation this season and has thrown two touchdown passes. He is the best runner among the quarterbacks and has exceptional on-field poise.

A change in the quarterbacks now could spark a passing game that has struggled in painful close losses to Bowling Green, Illinois and Iowa. A quarterback who could provide an occasional running threat in the option offense will make the superb running game even better. Ability to throw with more arm strength can get the ball down the field faster.

Indiana, 0-7 in the Big Ten, was a preseason top 20 team but has been hit hard by key injuries. Yesterday the Hoosiers lost 38-3 to mediocre Rutgers. Although the Hoosiers will try to rally for their final home game next Saturday, their win probability is about 20 percent. That’s a prime stage and opponent to give a start to Kramer or Annexstad.

A solid contribution from the quarterback and a Gopher victory improves the possibility of an upset against a hot Badgers team on a six-game winning streak. Although the Gophers have home field advantage, Minnesota has about a 30 percent likelihood of winning the game as things appear now.

If the Gophers change quarterbacks for the last three games of 2021 and his play elevates the offense that will be welcome news for next season. The development would set expectations for a much more balanced offense that is likely to include the return of All-American tailback Mo Ibrahim.

In yesterday’s game a sideline TV shot of Fleck showed him wringing his hands on a crucial play. At his news conference, the frustration of the loss was perhaps more evident than any time in his Gopher career. Being 0-5 against Iowa is painful.

Fleck’s record against his other border rival is 1-3. The coaches need to decide if another QB gives them a better path to making their record 2-3 against Wisconsin and again taking possession of Paul Bunyan’s Axe.