I headed to Williams Arena Sunday morning hoping to see my friend and Harrison Ford look-a-like Fred Hoiberg, the former Timberwolves guard and first-year coach of the Nebraska Cornhuskers. Traffic was a breeze, and parking in the mostly empty Oak Street Ramp was even easier.

I engaged a Gopher fan on my walk to the arena. I asked him if he thought Richard Pitino would return next season as the University of Minnesota’s men’s basketball coach. “I am not one for firing coaches,” he answered. “I’d give him another year.” 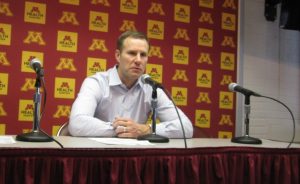 Pitino’s job status is a hot topic of late and the fan’s response surprised me. A Daily Gopher story last week said only six percent of respondents in a fan poll thought the program is headed in the right direction. When it was mentioned to the fan that Pitino’s Big Ten regular season record is 48 wins and 80 losses, he seemed to backtrack in his conviction. Maybe this week’s poll goes to five percent approval.

Seconds after entering the arena, guess who I encountered? Minnesota athletic director Mark Coyle. I smiled. We made eye contact. I asked, “Can I talk to you for a few minutes?”

“Nope,” he answered, adding to my intrigue and that of everyone else regarding the status of Pitino who is finishing up his seventh season leading the Gophers.

I met a media colleague in the concourse who I hadn’t seen in awhile. I told her I had been out of town a couple times, escaping the Minneapolis winter. She said I looked tan and rested, and not frustrated with the Gopher season.

Prior to the game the Gophers honored three seniors and their families with an on- court ceremony. Alihan Demir, Michael Hurt and Brady Rudrud were playing their last home game for the Gophers, who have experienced a disappointing season with under .500 records overall and in the Big Ten.

Demir, a first-year transfer from Drexel, has been a regular but Hurt’s playing time has been spotty during his career, and Rudrud has seldom known game action. Demir and Hurt were in the staring lineup, with the latter scoring a surprising five early points to help the Gophers to a 13-5 lead.

By the 7:40 mark in the first half I was losing focus in the game. The Barn was predictably quiet for a game involving two teams resting at or near the bottom of the Big Ten standings.

The lady and kids sitting behind me seemed to be having a good time, though. I suspect they were first time visitors to The Barn. “This is kind of a weird floor,” mom pronounced regarding the famous raised court. “The coaches sit on bar stools.”

Demir had nine points (he was averaging 6.7) with about four minutes to play in the first half. He was Minnesota’s second leading scorer as his team moved to a 41-29 lead in a game the Gophers controlled almost from the beginning.

Daniel Otruru, the sophomore center who likely played his last home game before heading to the NBA Draft this spring, started slow in one of the few games the Gophers didn’t need a dominant performance from him to have a chance to win. The 6-foot-10, 240-pound Otruru woke up the crowd late in the half with a dunk and also wowed fans with a behind the back dribble driving to the basket. By halftime the game seemed over, with Minnesota holding a 52-37 lead over the smaller and less talented lads from Lincoln.

In the early minutes of the second half I was most entertained during timeouts when the video screen showed clips of Gophers responding to the question of what planet they would most want to visit. Jarvis Omersa opted for Neptune.

With 12:20 left in the game, Minnesota led 75-48 and it clearly felt like Rudrud time. As of Sunday morning, he had played a grand total of 3:28 in Minnesota’s 29 games and had yet to score a point.

Nope, Pitino would make us wait for Rudrud’s appearance.

Rudrud finally checked into the game with 5:48 remaining, and almost immediately was urged by fans to “SHOOT!” About a minute later the fans oohed when his three point attempt from the corner almost went down.

But Rudrud wasn’t done because with 3:58 to go in the game the Eden Prairie point guard made a three-pointer. Seconds later the none too bashful crowd favorite let loose with another three point miss. Before going to the bench with about minute left in the game he made a nifty open court pass to freshman forward Isaiah Ihnen for a dunk.

The crowd roared during the closing minutes including when seldom used junior point guard Hunt Conroy entered the game. While he missed on two field goal attempts, he did make a free throw to the crowd’s delight.

After the game Pitino spoke to the fans about his three seniors who had a day they will never forget. Of course he praised all three and referred to Hurt as “the classiest kid I’ve coached.”

Maybe half of the modest crowd (announced attendance of 9,984) stayed after the game ended to hear Pitino and the three seniors speak and express appreciation for their careers. In what sounded like a shout-out to encourage more Minnesota prep players to attend the U, Hurt said, “When we’re winning here with Minnesota kids it makes things special.”

Rudrud played almost five minutes Sunday while Hurt played over 20 and scored five points. Demir, the only starter among the three for most of the season, scored a Minnesota career best 19 points.

It was a long day for Hoiberg who is rebuilding the Nebraska program with new players on the way. In the 107-75 defeat, the Huskers lost their 16th consecutive Big Ten game. At the postgame news conference the thoughtful Hoiberg praised both the Gophers and Pitino. Then on his departure from the news conference he said, “It’s good to see you, David.”