University of Minnesota Regent Dave Larson, who died unexpectedly late last month, used to telephone me about Gophers football.  I never heard him utter one word of doubt or negativity about coach Jerry Kill.

“He had my back,” Kill said after a public memorial service at TCF Bank Stadium last Saturday.

Larson telephoned me last spring and started going through the Gophers 2014 football schedule.  He projected Minnesota winning one game after another.  With his predictions, the Gophers would now be undefeated and in the conversation for the four-team college football playoff in January.

Larson met Kill shortly after the coach came here from Northern Illinois.  Larson loved football and played the sport in high school in Glenwood, Minnesota.  He was too small to play for the Gophers but he became a generous supporter of the football program and the University where he earned a B.A. in political science in 1966. 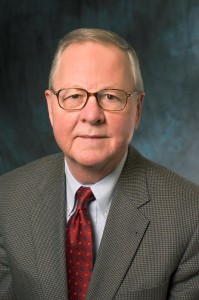 What Kill told Larson after he inherited the Gophers program in late 2010 was that academics among his players were a mess.  The collective GPA performance was so poor the Gophers were in danger of losing scholarships, per an NCAA policy that monitors grades.  “We had seven kids who were in bad shape,” Kill said.

Larson told Kill he wanted to help and asked what was needed to improve the schoolwork of the football players.  Larson, who had been one of Cargill’s top executives until retiring in 2010, was devoted to philanthropy and he gave $500,000 to the football program to pay for tutors, laptops and also enhancements to the weight room.

The collective academic performance of the football program has jumped from a GPA of about 2.1 to 3.0 and better in recent semesters.  Kill doesn’t hold back his gratitude for what Larson did.

“He set the standard,” Kill said. “He never wanted credit.  He’s the reason period (for improvement).  He saved some lives.”

Now the Gophers Athletic Department has an ambitious project to fundraise $190 million to improve facilities including a new indoor football building.  I know Larson was supportive of the entire project including better football resources that can make the Gophers more comparable to other programs in the Big Ten.  I suspect he planned on being a major project donor.

In 2008 Larson endowed a scholarship to assist middle-class families with the rising costs of education.  The result has been 350 Larson Scholars have attended the University, pursuing their educational goals and having peace of mind about college expenses.

Shona Nagel, one of the scholarship recipients, spoke at Larson’s memorial service. She told the audience of a Larson mantra to the students, “Do well and do good.”

Then she recalled how Larson punctuated his closing remarks to the students by thrusting a finger in the air and exclaiming, “Go Gophers!”

University of Minnesota president Eric Kaler also spoke at the service and is in “awe” of Larson’s commitment to philanthropy.  “His passion to this University was unmatched,” Kaler said.

Larson’s influence is felt at Cargill too where his business expertise, leadership and mentoring helped make the Minnesota company a powerhouse in the feed business.  His leadership and caring will live on through the many people he touched in his life including University of Minnesota graduates who had doors opened for them at Cargill.

Former Gophers running back Amir Pinnix is one of the many former football players at Cargill.  “He was a mentor, a friend, a coach,” Pinnix said.  “Dave actually got me started in my Cargill career.  He had very strong leadership values and believed in helping others out.”

Kill said it was a “tremendous honor” to eulogize his friend, Dave Larson.  “I will miss him.  We have to step to the plate because we’re representing a guy who gave us our start.”

Larson’s widow Janis and sons Lance and Reid spoke at the service.  They gave a heartfelt thank you to all in attendance for their support.  I am sure those who heard their words were grateful for knowing Dave and what he did as a business and University of Minnesota leader, philanthropist, and friend and mentor to so many.