Try opening your phone and not finding a recent story about Vikings’ quarterback Kirk Cousins. This market is obsessed with the Vikings and Cousins—even five months away from the next NFL season.

Fans (knowledgeable or not) have strong feelings about Cousins and the Vikings who have missed out on the last two playoffs. Cousins and former head coach Mike Zimmer, while they have their supporters, have frequently been vilified by the public.

Cousins, who is among the best paid players in NFL history at $35 million this year, is a polarizing figure that the media and fanbase scrutinize constantly. Former Vikings’ linebacker Ben Leber suspects Cousins is among the “most polarizing” athletes in Minnesota sports history.

Head coaches and quarterbacks can cause that kind of divide. In Minnesota it has gone to extremes because Vikings mania goes on 12 months per year.

If Cousins hasn’t performed up to expectations since he arrived here in 2018, all the media and fan “noise” probably isn’t to blame. “I don’t think he allows a lot of outside distractions,” Leber told Sports Headliners. “I am sure he hears it and feels it and all that stuff but he is so regimented about his day that I don’t think that he’s going to really let that affect him. …”

What may improve the chances of Cousins being a huge contributor to a Vikings’ return to the playoffs is his relationship with new head coach Kevin O’Connell. The 33-year-old Cousins had a rocky status with Zimmer, while O’Connell worked effectively with him in 2017 with the Washington Redskins. 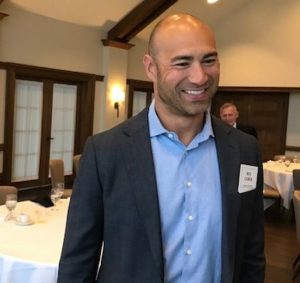 Leber refers to a “black cloud” hanging over Cousins in the past. “I think he is going to walk in now feeling like he is wanted there, and feeling like this offense and this team and the coaching staff is going to be behind him,” Leber said.

Leber, who remains close to the Vikings organization, said an absence of communication and rapport had to impact leadership coming from their quarterback.

“Well, I can’t image it not being a factor. When it’s publicly known that the head coach and the quarterback don’t necessarily have a relationship I think that’s an issue for any team.

“I think it’s a responsibility that the head coach has…to have that connection to the quarterback, whether you’re an offensive minded guy or defensive minded guy. Everybody knows that these 32 NFL quarterbacks are the most important player on the team, and most important person outside of the head coach. So the dynamic has to be solid. …I am not saying they have to be holding hands walking down the hallway, but I think it has to be respectful, and it didn’t sound like it was.”

This offseason, per Leber, there was a players’ meeting where team issues were candidly discussed. He was told about the gathering and won’t reveal a lot of details but said teammates of Cousins were wowed with the quarterback’s leadership.

Cousins reportedly verbalized concerns from the past season in ways those in the meeting never expected at the Vikings complex in Eagan, Leber said. “It certainly seemed like it turned some guys’ heads as far as Kirk’s leadership.”

Gopher coach P.J. Fleck reads children’s books to his players on Friday nights before games. He read “Elephant Me” to high school coaches last Friday evening at the annual Minnesota Football Coaches Clinic. Educated as a sixth grade social studies teacher, Fleck uses children’s books to share life messages such as being true to who you are.

Hutchinson’s Andy Rostberg was honored as 2021 Coach of the Year. His Tigers were 12-1 last year and won the Class 4A state title.

The MLB Morning Lineup newsletter ranked the top 100 players in the majors, with Twins shortstop Carlos Correa No. 14, center fielder Byron Buxton No. 39 and former Twin DH Nelson Cruz, now with the Nationals, No. 90.

Jim Lehman will be attend his 27th Masters this week. Representing his Minnetonka-based pro sports management company, he will be working with clients including Fargo’s Tom Hoge who is enjoying a breakthrough PGA season.

It was 25 years ago last week Clem Haskins’ Golden Gophers lost to Kentucky at the Final Four in Indianapolis.

After the tragic death of his son last summer, many in the college hockey world will be pulling for coach Bob Motzko to win the Frozen Four that starts Thursday night in Boston. The Gophers will be trying to win their first national title since 2003 and first under Motzko now in his fourth season at Minnesota.

Minnesota Junior forward Ben Meyers, a finalist for the Hobey Baker Award, leads the Gophers with 41 points this season (17 goals, 24 assists). That’s the most points by a Gopher since Rem Pitlick (45) and Tyler Sheehy (41) in 2018-19.

Vikings executive Lester Bagley, a franchise leader for years on community and business initiatives including the building of U.S. Bank Stadium, is the latest guest on the “Behind the Game” program seen on local cable markets and YouTube. The show is co-hosted by Agile Marketing owner Patrick Klinger and USHL commissioner Bill Robertson.

Professor Michael Hicks from Ball State told the Front Office Sports newsletter the economic impact of the Women’s Final Four in Minneapolis could be $75 million to $125 million.

Former Gopher Amir Coffey was a steal for the NBA Clippers when they signed him out of college as a free agent in 2019. He scored a career-high 32 points Friday night against the Bucks.