What’s worse than death, taxes or having a five-year-old kicking the back of your airplane seat on a red-eye from California to Minneapolis? 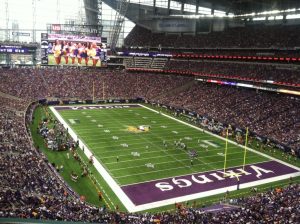 The not-so-hot themselves Minnesota Vikings will undoubtedly beat up on the woeful Lions Sunday at U.S. Bank Stadium. Depending on who you root for, the final score will either puff up your purple ego or sink you deeper into depression.

Want to sign up to be a fan of the Motor City Kitties? The franchise has an all-time record of 567 wins, 685 losses and 33 ties over 92 seasons, according to data from Pro Football Reference. Detroit has lost seven consecutive games to the Vikings and Minnesota leads the all-time series 78-39-2. Compare that with the Vikings’ losing record against the Green Bay Packers: 55-63-3.

The Lions won the NFL championship in 1957. That’s so long ago color television was a huge deal and politicians were people who actually wanted to put the public good before their own interests.

It’s been pretty much downhill for the Lions since the late 1950s when hula hoops were all the rage, Elvis was on a roll and Americans knew nothing of the Beatles. Since 1958 Detroit has been to the playoffs just 12 times, including a 23-year drought when the Kitties were absent from the postseason all but one time.

The 0-4 Lions come to town about a 10-point underdog to the 1-3 Vikings. The point spread is equivalent to being a three-touchdown dog in college football.

The NFL thrives on policies to create parity among their 32 teams. The Lions must be no-shows at league meetings when the parity playbooks are handed out. Maybe UPS doesn’t deliver to Detroit.

My Big Ten power rankings have the Lions No. 4 behind Penn State, Iowa and Ohio State. Rumor has it the Detroit brass tried to line up the Gophers, not the Vikings, for Sunday’s game.

Even when things go right for the Lions, they go bad. T.J. Hockenson, whose pass catching stats have been among the best in the league for tight ends, is injured and not expected to play Sunday. Neither is offensive tackle Penei Sewell, the offensive tackle who was among the prizes in the 2021 NFL Draft.

Pro Bowl center Frank Ragnow, the Victoria, Minnesota native, is on injured reserve and won’t be playing against the Vikings. Because of injuries the Detroit offensive line is a mess.

Let’s give a collective hug to those distraught Lions fans and their unlucky lives. Their first cars were Edsels, Gremlins, Pacers and Prowlers. They lost family fortunes to Bernie Madoff. Fine dining is from Little Caesars.

Do the Lions remind you of the postal service? Neither one delivers on Sunday.

The last time the Vikings saw the Lions, Matthew Stafford was the quarterback. A talented passer, he survived 12 seasons in Detroit and could have litigated for lack of support. Now quarterbacking the 4-1 Los Angeles Rams, he must feel like a man who escaped death row.

Former Gopher Ryan Santoso recently signed on with the Lions, and he is perfect on four extra point attempts and one field goal. Santoso previously had career stops with the Tennessee Titans and Carolina Panthers before arriving in the basement with the Lions. Friends debate whether to send congratulations or condolences.

You can refer to the Lions as “cupcakes” but that just leads to a question and a bad joke: What happens to them every Sunday? They make “turnovers.”

We haven’t even reached mid-October and the NFL schedule is just in week five. But guess what?

The Lions faithful are already looking forward to next year’s NFL Draft when Detroit will have two first round selections.