Enjoy a Thursday notes column that even includes Montana travel.

The Vikings’ Rick Spielman and Mike Zimmer are believed to be the only general manager and head coach combo in the 32-team NFL working on one-year contracts.

It appears ownership wants to see how the 2020 season plays out before deciding on the futures of Spielman who has been the GM since 2012 and Zimmer who was hired in 2014. The two have led Minnesota to two division championships, two playoff wins, and one NFC title game appearance in six years.

While the Vikings have done some offseason payroll trimming to create cap space, it’s unlikely money is preventing ownership from making extended contract commitments to their longtime leaders. The Wilf family, including Zygi Wilf, wants excellence on the field including the biggest prize—a Super Bowl appearance for their franchise which last appeared in the big game in 1977.

Former Viking defensive lineman Bob Lurtsema first met Zygi when he played in New York for the Giants. He quickly learned Zygi is a passionate pro football fan. Lurtsema said this week: “Money is not an obstacle (with the Vikings). He will do anything to have a winner. He’s a fan.”

Lurtsema isn’t surprised the Vikings haven’t re-signed defensive end Everson Griffen this offseason. He said Griffen, who played 10 seasons with Minnesota before declaring free agency earlier this year, became preoccupied with sacks in 2019 and made too many “critical mistakes.” Lurtsema believes Griffen sometimes was not in position to make the correct move coming off the line of scrimmage. “I wouldn’t have signed him (again),” Lurtsema said.

Numerous sources are praising the work ethic of Vikings 2020 first round draft choice Justin Jefferson, who is expected to replace departed star wide receiver Stefon Diggs. “He (Jefferson) sounds like an old-time player with his attitude,” Lurtsema said.

Adam Thielen, who in 2020 starts his seventh season as a standout WR with the Vikings, can be a leader and he said this week the first step is to earn trust with newcomers. “I know that I’ve been able to learn from some veterans that have come before me of how they handled…things, and how they helped me become the player that I am,” Thielen said.

Thielen acknowledged it takes time for a quarterback and receivers to become most comfortable with each other. This will be quarterback Kirk Cousins’ third season with Minnesota. “He has a better understanding of where I am going to be, and how I am going to run my routes, and I have a better understanding of how he likes certain things done,” Thielen said. 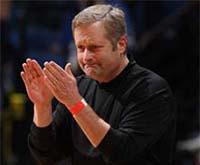 Hopkins boys’ basketball coach Ken Novak told Sports Headliners it was he who first made the connection between Jeff Mailhot and Gophers head coach Richard Pitino. Earlier this spring Mailhot, who is a Minneapolis native and was an assistant coach last season at Iona, asked Novak to contact Pitino about the opening on the Minnesota staff created by the departure of Rob Jeter to Western Illinois. “Jeff was interested in the job,” Novak said.

Pitino announced Monday he had hired Mailhot, who has over a decade of college coaching experience including junior college teams. CoachStat.net once named him the top junior college assistant coach. Mailhot played for Novak at Hopkins and later was an assistant coach for the Royals. Word is Mailhot found himself looking for another opportunity when Pitino’s father, Rick Pitino, took over this spring at Iona, and wanted his own assistants.

As a Minnesota native, Mailhot presumably will have a focus on recruiting the state. Novak believes his protégé will be a high-level recruiter. “First of all, he gets along with everybody,” Novak said. “He does well with relationships. He’s got a work ethic. He loves the game of basketball.”

Novak has seen a number of his Royals players go on to play for the Gophers, but none for awhile. He hopes the Mailhot hire will re-ignite the Hopkins-Gophers connection. “I will encourage them (Hopkins players) but I won’t push them,” Novak said.

Chet Holmgren, the five-star basketball player at Minnehaha Academy who is among the most coveted college recruits in the country for the class of 2021, lives in the Hopkins school district but Novak said there has never been discussion about him playing for the Royals. The 7-foot Holmgren has a sister, Alexandra Holmgren, who is over 6-foot-5 and played volleyball for the Royals last season as a sophomore.

It was 20 years ago this week that the Timberwolves’ Malik Sealy died in a car crash after leaving Kevin Garnett’s birthday party. In Sealy’s honor, the team retired his No. 2 jersey.

Steve Erban’s Stillwater based Creative Charters, organizers of Gophers, Kentucky Derby and other fan trips for decades, has a new offering of a Montana experience featuring fly fishing, golf and more this summer. Early Bird specials with a May 25 deadline are available. More at Creativecharter.com., or by calling 612-801-7141.

Despite the COVID-19 pandemic, it’s possible the Lynx, Timberwolves, Twins, United, Vikings and Wild could all be playing games this summer, and causing a logjam on local television. Because of virus concerns, broadcasters might be describing road games from television monitors away from the playing venues.

With parts of the country having different infection rates and policies on containing the virus, baseball, basketball, hockey and soccer could use neutral playing sites instead of scheduling games in all cities with franchises. The Twin Cities, with its proven support for hockey and numerous indoor rinks and practice facilities, along with the Xcel Energy Center as a site for games, might be a hub for NHL scheduling this summer.