In one of the most anticipated prep football games in years, 12-0 Lakeville North will play 10-1 Eden Prairie for the Class 6A state championship Friday night at U.S. Bank Stadium. Because of past results and reputation, many high school football observers are predicting North will win, and that’s fine with EP head coach Mike Grant.

“We’d like them to think that they should win, (and) that they have the trophy all locked up. …But we don’t feel that way,” Grant told Sports Headliners yesterday. “We just feel like it’s another game.”

Grant refers to the Panthers as a “great team,” and his Eagles lost to them 14-0 in a September game. North has many outstanding players including on the offensive and defensive lines. Bryce Benhart, the 6-9, 300-pound offensive tackle headed to Nebraska, is a marquee name on a huge offensive line. The Mostaert twins, Will and Eli, are forces on the defensive line and verbally committed to North Dakota Sate. 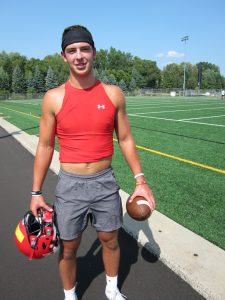 The Panthers totaled five first teamers on yesterday’s Star Tribune All-Metro offensive and defensive units. The Eagles had one, linebacker Collin Penn, although maybe quarterback Cole Kramer, named to the second team, should have been included, too. “With Cole Kramer, we’ve got the best quarterback in the state,” Grant said.

Grant, whose team is the defending 6A champion, knows his players need to be emotionally ready Friday night. “(Otherwise) it will be a quick night for Lakeville North, because if you don’t bring the passion, they’ll steamroll you.”

Grant will try Friday to win his 12th state championship at Eden Prairie. Part of the success formula is making adjustments in games. Grant said, “When we go in (to the game) everyone says what are you going to do? Well, it depends on what they (opponents) do. Because they’re going to make a decision on how to play us and we’ll make a decision on how we’ll attack what they’re doing.”

Asked how he has become so proficient at making in-game adjustments, Grant joked, “Well, I am old. There’s no book on it. Trust me.”

Grant grew up in a football household being around his famous dad, Bud Grant. In college he played for the legendary John Gagliardi at St. John’s. He learned about many things relevant to coaching including flexibility.

“We’re not a textbook team,” Grant said. “We don’t even have a playbook. We’re not a script team. We’re kind of flying by the seat of our pants by design, because I never understood how people scripted. What if they (opponents) lined up a certain way (other than expected)?”

Border numbers: The Packers, who play in Minneapolis Sunday night against the Vikings, are 0-5 in road games this season. The Golden Gophers, who play at Wisconsin on Saturday, haven’t won in Madison since 1994.

A writer could predict more foolish things than the Lions, 4-6, upsetting the NFC North Division leading Bears, 7-3, tomorrow in Detroit. If the Vikings, 5-4-1, defeat the 4-5-1 Packers Sunday that will tighten up the division race and calm the Purple hysteria following Minnesota’s loss last weekend to the Bears.

Most played rivalry in college football? Minnesota and Wisconsin is the answer with game No. 128 coming up Saturday.

It’s being kept quiet but a local group is working to bring the National Golden Gloves Boxing Tournament to Minneapolis next May. The five-day tournament will include dozens of prelim bouts in various weight classes for men and women. All championship bouts would be at the Minneapolis Armory. The city hasn’t hosted the tournament since 1977.

James, who is friends with Twins legend Tony Oliva, will do his heavy bag work and prefight training at a northern Minnesota location. That’s similar to the north woods training preference of the late Scott LeDoux, the well-known Minnesota heavyweight. James is a boxing historian and honors Minnesota fighters of the past with tributes like his training location.

Premier Boxing Events and Fox Sports have included the Armory on a short list of national venues to host world-class bouts in 2019. PBC promoter Al Haymon’s group is said to have a bigger influence over boxing than Don King once held.

The Wild will host a free, open-to-the-public outdoor practice on Saturday at the Recreation Outdoor Center (3700 Monterey Drive) in St. Louis Park. The Wild’s practice is scheduled to start at 11 a.m. and last approximately 45 minutes. Fans are encouraged to arrive early as space is limited. Caribou Coffee, the official coffee of the Wild, will provide free coffee and hot chocolate to spectators.

Phil Esten, who takes over as the University of St. Thomas athletics director in January, will be in town next week to watch the November 30 Tommies-UW-River Falls basketball game at U.S. Bank Stadium. Esten first met Tommies men’s coach John Tauer when the two were students at St. Thomas.

Esten, 46, was a highly regarded administrator at the University of Minnesota years ago when he worked for athletics director Joel Maturi. Esten told Sports Headliners Maturi impressed him with his commitment to “putting values first” regardless of what was popular or easy to do.

Esten’s name has been mentioned in inner circles over the years as a candidate to be the Gophers athletics director. He has been a top administrator in athletic departments at Minnesota, California and Penn State most recently where his duties have included overseeing the football program.

Esten has Midwest roots, growing up in Wisconsin where his dad was a Division III cross country coach who won a national title and numerous conference championships. His grandparents were original Green Bay Packers stockholders and he, too, owns stock.

Esten will succeed Steve Frtiz, who is departing after 27 years as AD at St. Thomas. Esten praised Fritz for “doing a fantastic job” in helping to shape one of the most successful Division III athletic programs for men and women in the nation.

Condolences to family and friends of Ron Simon who passed away earlier this month. The former Gopher tennis player, Minneapolis attorney and pioneer sports agent was a terrific person. I helped research his 1993 book The Game Behind the Game: Negotiating in the Big Leagues. That book told compelling stories about his clients including Kent Hrbek, Kevin McHale and Paul Molitor.