Larry Thayer still has the paycheck stub from his remarkable experience with the NHL’s Minnesota North Stars. It will be 40 years next February that Thayer was paid $325 to suit up as the emergency goalie for his hometown team.

Thayer was at home in Edina on Saturday, February 23, 1980 when he received an unexpected telephone call from a woman with the North Stars. She was calling for North Stars coach Glen Sonmor and general manager Lou Nanne.

“They would like to know if you could come over and play for the North Stars,” the front office assistant told a stunned Thayer. The team’s backup goalie had been injured in the Saturday morning practice and team officials were scrambling to find a replacement for that evening’s game at Met Center against the New York Rangers.

Thayer, who hadn’t played in an organized hockey game for five years, thought the call was a prank and almost hung up his telephone.

The woman asked Thayer if a phone conversation with team trainer Richard “Doc” Rose would reassure him. The two men knew each other. When Thayer talked to Rose he inquired about what was going to happen if regular goalie Gilles Meloche got hurt during the game.

“We will stitch him up and put him right back out there,” the trainer told Thayer.

That was a comforting answer, but in reality Thayer didn’t need too much convincing. Yeah, he hadn’t played in a game since being the Golden Gophers starting goalie in 1975. Yes, he was out of shape, and he was a cigarette smoker who enjoyed his beer, but this was an “unbelievable” opportunity to suit up for the team he had been following since growing up in Edina. “My childhood dream (come true),” Thayer told Sports Headliners during an interview yesterday.

Before he could head for the Met Center, the 27-year-old Thayer had to call Braemar Arena in Edina and tell the staff he wasn’t coming to work that Saturday night. “Why not?” somebody asked.

“Because I am going to be with the North Stars,” Thayer answered.

Thayer arrived at the Met with his own ice skates, goalie mask and high anxiety at the thought he might actually have to play in the game. The North Stars gave him jersey No. 30, but unlike other players he didn’t have his name on the back of it. Sonmor and the players, including former Gophers teammates Mike Polich and Tom Younghans, were welcoming.

“The guys were so nice to me,” Thayer recalled. “They said come and lead us out on the ice (for warm-ups prior to the game).”

Meloche didn’t like to spend a lot of time on the ice during warm-ups so for about 20 minutes it was Thayer who was the target of shots by teammates. It was also prior to the game that he took notice of fans who were bewildered as to who this new goalie was.

“Who the (blank) is that?” Thayer heard from the stands. It was a bizarre time for Thayer whose identity was hidden behind his mask, and yet he was looking up in the seats and recognizing people he knew.

The Rangers’ roster included another Thayer teammate with the Gophers, Warren Miller. On one of Miller’s last shifts he caught a glimpse of Thayer for the first time that night, and Miller was shocked. “He does a double-take that was priceless,” Thayer said.

The North Stars were ahead in the third period when Thayer’s anxiety went to a higher level. Meloche had an equipment problem and it appeared Thayer might have to replace him. North Stars captain Bobby Smith said, “Larry, are you ready to go?”

Thayer remembers his heart pounding at the thought of trying to preserve the win for his new team. He was so nervous he “gurgled” a response to Smith.

To Thayer’s relief, Meloche was able to make a quick enough equipment adjustment to stay in the game and finish out the remaining minutes of a North Stars’ victory. In the locker room Thayer and teammates enjoyed some beers and then headed toward the Met Center exits. On the way kids asked for Thayer’s autograph, not knowing or caring who this one-game goalie was.

If Thayer had seen game action how would he have done? Okay in most situations but breakaways like two skaters streaking in on him would have been difficult, he speculated.

Thayer never got a chance to get an on-the-ice answer to how he would perform because even though the North Stars had signed him to a short contract, they didn’t need him after that one memorable night in 1980 when he had one of the best seats in the Met to watch the action. But Thayer, of course, is grateful for the good fortune he thinks came about because his name and reputation was known in the local hockey community.

Thayer’s resume included working as an instructor at the summer hockey camp of his Minnesota coach, the legendary Herb Brooks. Thayer was also acquainted with Sonmor and other hockey leaders in the state.

Thayer was the starting goalie on the 1969-70 Edina hockey team. He had 12 shutouts and never gave up more than two goals in a game. He played in the classic 1970 state championship game when the Hornets lost 1-0 in overtime to Minneapolis Southwest.

After high school Thayer didn’t immediately play college hockey, but eventually he joined the Gophers as a walk-on goalie for the 1974-75 season. How did that come about? Well, he was driving the Zamboni at Braemar Arena before the fall of 1974 when Minnesota assistant coach and goalie guru Warren Strelow spotted him and asked if he wanted to tryout for the Gophers.

Early in that season Thayer became the Gophers’ regular goalie. He compiled a 19-3-1 record in his only season playing for Minnesota. The Gophers won the WCHA regular season and playoff titles before losing in the Frozen Four to Michigan Tech. 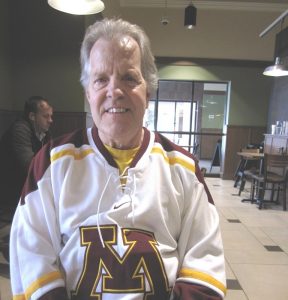 To this day, Thayer is grateful for playing under Brooks who he described as tough but fair. “I learned more about hockey in one year with Herb Brooks than in my whole career,” Thayer said.

Thayer was manager of Braemar Arena for 38 years before retiring in 2010. Next week, on March 6, he will turn 67 years old. That’s a date to look forward to and so, too, is February 23, 2020 when it will be the 40th anniversary of his surreal experience playing in the NHL for his hometown team.

“I’ll do some celebrating,” said Thayer, who still likes beer. “I might even have an Old Fashioned.”