With the offseason departure of veterans Ryan Suter and Zach Parise, the Minnesota Wild faces a leadership question as the team approaches the start of training camp September 22. Forward Nick Bjugstad, 29, addressed the subject and his own career in an interview with Sports Headliners.

Bjugstad acknowledged it will be a different locker room next season without Suter, 36, and Parise, 37, who for years were the face of the franchise. “Those guys will be missed and they’ll have to be guys that step up,” Bjugstad said.

Bjugstad has seen the importance and role of leadership during a 10-year pro career. He played seven seasons with the Florida Panthers, two with the Pittsburgh Penguins and a first year with the Wild in 2020-2021. “I’ve been in very different locker rooms. I’d say the best cultures I’ve been in, the leadership starts from the top.”

Sidney Crosby, a super star for the ages, was a teammate of Bjugstad in Pittsburgh. Crosby led the Penguins not just with enormous talent but with a work ethic that set the tone for championship expectations. In Florida Bjugstad said the best teams he played with enjoyed and challenged one another.

How does Bjugstad see his leadership role for the coming season? “Definitely as an older guy you have to view yourself as someone who can help…the young guys. Help be a voice in the locker room. … I think a lot of the wisdom I retained over the years was from the older guys.”

Leadership is never about one person on a roster. Bjugstad expects team leaders to include Marcus Fuligno, Joel Eriksson Ek and Jared Spurgeon. Fuligno, Bjugstad said, is a vocal leader in the locker room and Ek’s focus and attention at the arena is exemplary. And Spurgeon?

“He reminds me of Crobsy in the way that he is very inclusive,” Bjugstad said. “Treats everybody the same, makes them feel welcome, and obviously an unbelievable defender.”

Bjugstad said the right locker room environment creates a culture where “everyone flourishes.” That includes impressionable younger players who are comfortable coming to veterans for advice.

Bjugstad said he loves meeting different people. He enjoys being around the locker room, and he is curious about the psychological aspect of sports.

Adversity has played a major part shaping who Bjugstad is. He’s endured serious injuries and when he came to the Wild about a year ago his past included major groin and back surgeries. As a result he has taken much more interest in the human body and how it functions.

He knows if players are injured and don’t understand what happened to them, the development can lead to a downspin in careers. “…If I wasn’t injured as much as I was I wouldn’t really be talking about the nervous system and how the body functions,” Bjugstad said. 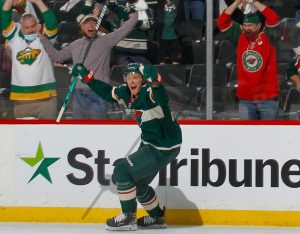 Bjugstad has taken a different approach to offseason training this summer. As a younger player he was very aggressive in the weight room and didn’t pay attention to his body. Now his training approach is much more balanced including workouts in the pool and even proper breathing. His regimen emphasizes staying healthy and having a long career.

The former Blaine High School star who was the state’s Mr. Hockey in 2010, hasn’t played a full NHL season since 2017-2018. His goal now of playing a full schedule of 82 games is not a surprise.

At 6-foot-6 and about 208 pounds, Bjugstad is thin and he targets consumption of 5,000 calories per day. He eats a gluten free diet of healthy foods. While it may sound great to have a pass for 5,000 calories a day, Bjugstad does find himself eating just because he must.

He feels energized and mentally ready as training camp nears. As he approached his first season with the Wild a year ago, he wasn’t able to train the way he wanted because of surgeries. “I was a little apprehensive with a lot of the things I was doing going into the season and then I got through the season relatively healthy, and then this summer has been full bore,” he said.

The Minneapolis-born Bjugstad is grateful the Wild gave him an opportunity to come home. Because of the pandemic, this will be his first season playing in front of fans at Xcel Energy Center. “I love the fans. I was a fan of the Wild when I was a kid so I am really excited to get people in the building.”

Over the years the Wild has struggled to score goals, including in the playoffs. Bjugstad said he has been working with a skills coach to help his shooting in different positions. While offense is important, he wants to be known as a two-way player. “I’ve learned to play a little more of a defensive game than I played when I was younger.”

The Wild has been waiting a long time to make a deep playoff run. What about the season ahead? “I definitely think this group we have the Wild…wants to get better and enjoys being around each other, and that can make the world of difference in a long season and a playoff run,” Bjugstad said.