The Name, Image & Likeness (NIL) phenomenon is allowing athletes to monetize their success on the field or the court with endorsements, personal appearances and other marketing. The policy was put in place by the NCAA about 12 months ago and its impact has been profound, particularly in football where outside entities, supposedly separate from athletic departments, are facilitating payouts to benefit athletes.

Often monetization goes through NIL collectives that pool money from businesses and boosters, help facilitate deals and directly coordinate payouts to athletes for things like charity appearances. Many other places around the country have been out front on collectives but now Rob Gag and Derek Burns are starting up Dinkytown Athletes to assist University of Minnesota athletes. The announcement about Dinkytown Athletes came this month and puts Minnesota on the national collectives map.

Coaches aren’t allowed by NCAA rules to set up collectives or administer them. Nor are coaches supposed to offer the promise of money to an athlete in the recruiting process.

It’s difficult, though, to believe there isn’t a cozy relationship between many coaches and booster-run collectives. What coach would want NIL money to be offered by a collective to a prospect he doesn’t want in the program?

While it’s against NCAA rules to use potential NIL money as a recruiting inducement, it’s easy to be skeptical about what might be happening. For example, a video clip that surfaced in late June showed a person dressed in Texas A&M clothing pointing to the luxury suites inside Texas A&M’s stadium and allegedly telling recruits they would get “a lot of money” from suite occupants if they decided to play for the Aggies.

What does recruiting authority Ryan Burns from GopherIllustrated think about NIL and the college football world? “Everybody wishes they had NIL. I can assure you of that. …”

Does Burns believe Gopher coaches are being impacted in recruiting by the NIL presence at some schools? “Constantly. …If all things are equal (for a recruit), but another school can offer you NIL in terms of $10,000, $25,000, maybe more, than the decision doesn’t even become a decision.”

The Gophers lost out on several players they were hoping to land for the class of 2023, Burns said. “I know there were (recruiting) fights Minnesota didn’t take because they knew that NIL was involved with the kid, and you can’t bring a knife to a gun fight.

“There were some other guys (recruits) they took the fight and it ended up being that those other schools found some NIL money.”

While using illegal NIL inducements in recruiting is all but certain some places, it’s not going to happen at Minnesota. “They have the strictest compliance (with NCAA rules) in all of college sports,” Burns said. “There is nobody looking the other way here at the University of Minnesota. You can say that’s good, you can say that’s bad. You can say that’s what it is. The head coach can’t facilitate deals. That’s not the way it’s going to work with this compliance department. …” 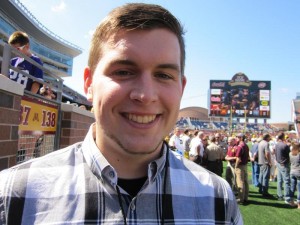 Where Burns can see NIL money being particularly helpful at Minnesota is after athletes are nearing the end of their playing careers. The athlete who is struggling with a decision whether to play another season of football, basketball or volleyball versus going into the job market could use NIL money to be more financially comfortable for a while. In football a player who might project as a late round NFL draft choice could stay another season because of NIL money, help the team and work to improve his draft position.

A new Big Ten media rights deal is expected to deliver up to $100 million to each school in the conference. That figure could roughly double Minnesota’s budget for athletics.

The way Burns sees it the athletic department won’t need donation money as in the past. “They’re going to have another $40, $50 million. They’ll be just fine, but how about you throw that donation into the NIL collective, and that’s going to go directly to the student athletes. And that’s going to probably help your favorite team win a couple more games.”

While it’s different than NIL, Gopher athletes can soon benefit from a new NCAA policy allowing schools to provide financial support to student-athletes for academic success. The Gophers plan to institute the policy in the fall and it goes beyond the scholarship benefits student-athletes have long received. Schools are allowed to pay up to $5,980 per year to an athlete. A ruling by the U.S. Supreme Court a year ago has opened the door for schools to pay athletes.

Burns said coach P.J. Fleck and his staff would “love” to add another offensive and defensive lineman to the 2023 class. An additional receiver could be welcome, too. National Signing Day is December 21.

The Gophers are also likely to be adding to the class with college transfers. Burns predicted the total of newcomers (mostly high school recruits) could be 25 to 28.

Who excites him in the 2023 class already? Burns offered up two running backs, Darius Taylor and Marquese Williams. Both Taylor and Williams received more than 25 Power Five offers, per Burns. They are near four-star recruits in the 247Sports recruiting rankings of players.