No Whimsy, U Can Upset Buckeyes

How about if the University of Minnesota Golden Gophers pull off an upset for the ages Thursday night against national title contender Ohio State after repeating this pregame mantra: “Win one for Smokey Joe! ”

Now bear with me for a little storytelling.

Minnesota will enter its season opening home game about a 14-point underdog to No. 4 nationally-ranked Ohio State. The game looks like a mismatch, and the history between Minnesota and Ohio State doesn’t offer much encouragement to Gopher fans. Minnesota has seven wins in 52 games against the Buckeyes since the series started in 1921. In the last 75 years the Gophers have four wins, most recently at Ohio State in 2000.

The last Minnesota victory at home was in 1981, when the Gophers won a 35-31 shoot-out in old Memorial Stadium. The Minnesota head coach was Joe Salem, an offensive guru who directed a major upset over No. 18 Ohio State. It was Minnesota’s program highlight during a 4-5 Big Ten season. 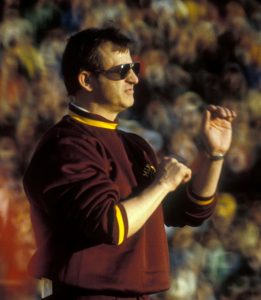 Salem was nicknamed Smokey Joe during his Gopher playing career in the 1950s. Salem cigarettes were popular back then, so a student publication at the U dubbed him Smokey Joe and the nickname stuck. Although a backup quarterback during his playing career, he was a fiery competitor and his stage was never bigger than when he came off the bench to help lead the No. 3 ranked Gophers to a win over No. 1 ranked Iowa. Minnesota went on to win the 1960 national championship. Salem, 83, is long retired from head coaching and returned to his hometown of Sioux Falls, South Dakota after leaving the Gophers following the 1983 season.

So there you have it, Gopher football fans. Before P.J. Fleck sends his lads onto the field Thursday night, he could tell them “Win one for “Smokey Joe!”

A motivational talk before the game by Fleck is a given and with or without invoking the name of Smokey Joe the Gophers will be sky-high to pull off THE upset of college football’s opening weekend. How can they do it? Here’s how:

Despite having an inexperienced quarterback, the Buckeyes figure to score a lot of points against opponents. Minnesota’s defense is suspect after a so-so 2020 season. It’s mandatory for the U to produce time consuming drives while keeping the Buckeyes’ offense on the sidelines.

Remember two of Minnesota’s most impressive wins during the 2019 season when the Gophers won 11 games? They won the time of possession battle in upset wins over top-10 ranked Penn State and Auburn. In the Auburn game, it wasn’t even close—37:35 to 22:25.

A discrepancy like that for Minnesota Thursday night will greatly enhance the odds of a Gopher win. And on those long drives the Gophers need to produce points either via touchdowns or field goals.

The U will likely run its Heisman Trophy hopeful RB Mo Ibrahim over 25 times in the game. But it’s important, too, that the Gophers not be as predictable offensively as last season. Frequently Minnesota had conservative play calls, including too many third downs with Ibrahim running (or trying to) off tackle when the whole world knew what was coming before the Gophers came out of the huddle.

Quarterback Tanner Morgan will have to throw with accuracy and offensive coordinator Mike Sanford will have to produce an imaginative game plan for the Gophers to sustain drives. No. 1 wide receiver Chris Autman-Bell provides a major contribution if he is healthy enough to play, and a breakthrough night by another pass catcher like tight end Brevyn Spann-Ford would provide a big lift to the offense. With one of college football’s most experienced offensive lines, the Gophers need to push around an Ohio State line and linebackers considered the best in the Big Ten Conference.

In six of eight games last season the Buckeyes scored 38 points or more. It appears Minnesota will have to total over 35 points to have a high probability of winning Thursday night.

It seems like from day one in Dinkytown (winter of 2017), Fleck has preached “the ball is the program.” Translation: against the Buckeyes the Gophers can’t turn over the ball running and passing from the line of scrimmage. On special teams they can’t make misjudgments regarding field position or even worse fumble kickoff returns and punt returns. There will be no margin for error Thursday night against an Ohio State team with the best talent in the Big Ten Conference. The reputation of the Buckeyes can intimidate other teams before games even start.

Errors have to come from the Buckeyes, starting with quarterback C.J. Stroud who saw minimal playing time last season and didn’t even attempt a pass. Minnesota’s defense needs to rattle him early in the game. Maybe it can be done through defensive schemes, punishing tackles or unexpected blitzes. Crowd noise could help, too, making it difficult for the Buckeyes to hear snap counts, and fueling the emotions of Minnesota’s defensive players.

If Minnesota can’t force Stroud into a bad performance—or at least subpar—the party will be over for the Gophers before it even begins. The Buckeyes feature a terrific offensive line and dangerous running backs. Their receiver group, led by All-American Chris Olave, might be the best in America.

Certainly any kind of miscues from the Bucks will be welcome developments for the Gophers. Ohio State interceptions, fumbles, timely penalties, blown assignments etc. could lead directly or indirectly to Minnesota points. A score or two made or set up by the U defense will not only help on the scoreboard but also test the poise of the Buckeyes in their first road game.

Ohio State coach Ryan Day has a 15-0 career record in Big Ten games. For Minnesota to put a blemish on that mark, the Gophers will have to be what Fleck said earlier this month: be the best version of themselves they can be.

The outlook here is that Minnesota has a 20 percent chance of shocking the sports world Thursday night. A win will elevate the program to national importance and increase the likelihood of an elite season. A victory could also become a turn-the-corner night for years to come for Fleck and the program.

If an upset script can’t be achieved, the best alternate storyline is for a loss where the Gophers impressed and played a close game (perhaps 17 points or less). Part of that alternate scrip needs to include Minnesota’s most important players avoiding injuries (including Ibrahim, Morgan, Autman-Bell and defensive linemen Boye Mafe and Nyles Pinckney). A summer night scenario like that could work for the Gophers and their fans including Smokey Joe.