Like it or not, by the year 2018 the Minneapolis-St. Paul market could have five new stadiums that opened during a 10-year period.

Dr. Bill McGuire’s intent to build a soccer-specific stadium to house his Major League Soccer expansion franchise puts MSP in unique territory on the American sports scene.  Three or four years from now it looks like this town will be the only area in the country that can list the opening of five major stadiums in a decade—at a cost of about $2 billion.

“It is an incredible phenomenon,” said Bill Lester. 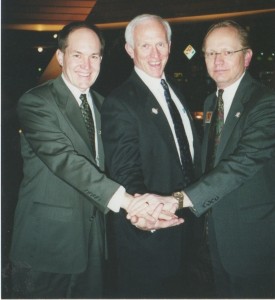 Lester was executive director of the Metropolitan Sports Facilities Commission from 1987-2012.  Part of that period he contended with restlessness among the Metrodome’s major tenants who wanted their own buildings.  The campaigns to move on were all successful, with the Gophers opening TCF Bank Stadium in 2009, the Twins moving into Target Field in 2010 and the Vikings now working toward a first season in their new covered stadium in 2016.

The independent baseball St. Paul Saints will open their new $60-plus million stadium in Lowertown this spring.  And this week comes news the MLS is granting a franchise to McGuire and his group who want to build an open air soccer stadium in the Minneapolis Farmers Market area that might cost between $100 million and $150 million.

The Gophers, Twins, Vikings and Saints facilities received major funding from the public sector.  Indications are most city, county and state political leaders aren’t in favor of public money for a soccer stadium.  Yet even if the facility is privately financed there surely will be at least indirect taxpayer money involved to help with surrounding roads and other elements.  “There are some ways you can help them without it being a direct subsidy,” Lester said.

The real possibility of five new stadiums at a $2 billion collective price tag is completely different than what’s going on around the country where building one major venue sometimes gets done, but not always.  Atlanta is building new football and baseball stadiums for its NFL and MLB teams at the same time but that’s unusual.  Los Angeles has been trying to agree on a football stadium plan for decades to attract an NFL franchise—perhaps the Rams who once called LA home but now find themselves trying to convince the city of St. Louis and state of Missouri to build them a new palace.  Oakland is in danger of losing its baseball and football teams because no progress has been made for years in finalizing a plan for new stadiums.  Other cities and teams are at odds, too.

Long ago there was a reluctance here to invest in facilities but Lester thinks that changed with the successes of the Metrodome and Xcel Energy Center.  He noted the dome was “built on time and on budget,” sending a message of accountability to a skeptical public.  The versatile facility also kept the Twins and Vikings from moving out of town for 25 years.  “The public portion of the investment was very successful,” he said.

The Xcel Energy Center had a cutting edge design and enhancements.  The facility showed the public how a gameday experience there, or later at Target Field, could be so much more than what fans once experienced in other Minnesota sports venues.

MSP, once a reluctant player in the stadium building game, has become the parade leader among American cities.  Lester believes the change in attitude is also explained by how team owners are no longer viewed as billionaires running out of town with the money from their new riches generated in new stadiums.  “It just didn’t hold up to very much scrutiny,” Lester said.

Lester said the diversified sports scene here plays a role in attracting and keeping young professionals and entrepreneurs, “part of a broader picture” to feed the vitality of this area.

By 2018, Minneapolis-St. Paul will be home to not only major league baseball, basketball, football, hockey and soccer but also big time college basketball, football and hockey with the Gophers.  In addition, MSP has professional women’s basketball with the Lynx and men’s pro lacrosse with the Swarm.  No other city can match that lineup, including metros with three and four times the population of the Minneapolis-St. Paul area.

The already intense competition among teams for ticket buyers, sponsors, suite purchasers and advertisers will kick up a notch with an MLS club and new stadium.  Can all those pro teams, and the Gophers, be successful at the box office and with their overall balance sheets?

Sports Illustrated’s baseball preview issue, on newsstands this week, predicts Twins AL Central Division rival Cleveland will not only win the division but also will defeat the Nationals in the World Series.  The Tigers, White Sox and Royals will trail the Indians but finish ahead of the Twins who will be last in the division, per S.I.  The magazine forecasts a Twins record of 67-95, the worst in the AL.  The club was 70-92 last season and S.I. believes the 2015 team is improved but so is the division with tough competition.

The magazine—quoting an anonymous scout—said “the starting pitching is respectable now.”  But outfield defense, including with a declining Torii Hunter, is a minus and while the club has power hitters in Oswaldo Arcia and Kennys Vargas, the long ball isn’t part of Joe Mauer’s future, S.I. wrote.  “Joe Mauer has lost his power, and in that ballpark (Target Field) it’s not coming back,” said the scout.  “He’s an opposite-field singles and doubles hitter now.”

New manager Paul Molitor?  “The team stopped listening to Ron Gardenhire, so the manager change was smart,” the scout said.

The Gophers hockey team and coach Don Lucia have plenty of incentives in the NCAA Tournament.  The Gophers have a tournament opening Northeast Regional game late this afternoon against Minnesota Duluth.  A win advances Minnesota to the regional title contest tomorrow, with the winner earning a place in the Frozen Four April 9-11 in Boston.  The Gophers were the national runner-up last year at the Frozen Four.

A national title would be the third for a Lucia-coached Gophers team.  If Lucia is successful in winning the NCAA title, he receives a bonus of $75,000, according to a schedule of incentives document he and the University agreed to in July of 2012.  Lucia has already earned $30,000 and $15,000 bonuses for winning the 2015 Big Ten regular season and conference championships, according to that document.

Union defeated the Gophers in the national championship game last April but didn’t qualify for this year’s NCAA Tournament after a 19-18-2 season.  The Union team of last year showed the Gophers an aggressiveness and physical style that could help Minnesota in this year’s tournament.

Wild goalie Devan Dubnyk is 2-0 against the Flames this season with a 0.98 GAA and one shutout.  The Wild play the Flames at Xcel Energy Center tonight.  While the Wild is 2-0 this season against Calgary, Minnesota is 0-2 versus the Kings who are at Xcel tomorrow night.

Should be fun having the Matthews brothers in the NFC North together next fall.  The Vikings signed linebacker Casey Matthews as a free agent this week.  Casey’s older brother, Clay Matthews, is a six-year NFL veteran and standout linebacker for the Packers.  Casey started a career-high 11 games for the Eagles last season.  A four year pro, he also had a career-best 62 tackles last season.

Timberwolves president Flip Saunders and general manager Milt Newton rank No. 24 in ESPN.com’s listing this week of the NBA’s front office decision makers.  The top five front offices among the 30 league franchises are the Spurs, Warriors, Rockets, Heat and Trail Blazers.  ESPN ranks Saunders No. 25 among the league’s best coaches, with Gregg Popovich of the Spurs No. 1, the Hawks Mike Budenholzer No. 2 and the Warriors Steve Kerr No. 3.  Former Wolves coach Randy Wittman, now head coach of the Wizards, ranks No. 26 despite a winning record in Washington.