Mike Grant, 63, is more than a month into a new experience at Eden Prairie High School. As of January 1, he is retired as the activities director but continues with his legendary career as head football coach. No complaints, though.

“My days are certainly full.” Grant told Sports Headliners. “Football takes as much time as I want to put towards it.”

With no administrative or teaching responsibilities, football is his only focus at the school he has been coaching at since 1992 and where his Eagles have won 11 state championships. As activities director, Grant was sensitive to other sports and their coaches, and he didn’t want to offend others by being outspoken about the value of football. “Now I can promote it all I want,” he said about the game he loves and learned from his famous dad, Bud Grant.

The EP varsity and junior varsity teams were undefeated last year. The sophomores and freshmen each lost a game. But Grant believes it’s not winning that is the most important reason kids come out to play football at his school and others across the state.

“You can have a great experience in football and win one game because you are with your buddies,” Grant said. “There’s camaraderie in football that is very different than any other sport.”

With all the success Grant has had at Eden Prairie, readers might scoff at his remarks. But before coming to EP he was head coach at Forest Lake where the wins were few and opponents could almost predetermine the final score.

“I have been there,” Grant said. “I look back on that and those were some of my fondest memories with those kids that were playing. I still see those guys. They are men now and they have nothing to say but great things about playing football way back then.”

A lot of youth are specializing in one sport these days. An industry has developed of paid trainers from outside the school systems who work with young athletes with ambitions of earning college scholarships and even professional careers. 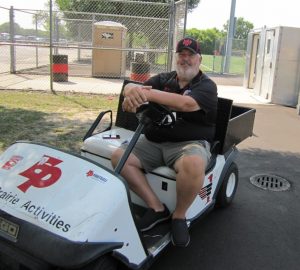 Sometimes disillusion sets in long before high school graduation. By focusing on one sport, kids may eventually realize they are missing out on their full potential as high school athletes, or that the advice from others isn’t working for them. Grant has seen some of his better players take a circuitous route to his roster. “Because they come back out (for football) as juniors and seniors after being told that they should focus only on basketball, or only on hockey, or only on whatever. …”

During the last several years the safety perception of football has taken a nosedive with the public because of negative publicity concerning concussions in the NFL and college football. Even though the incidence of concussions in high school football is reportedly less than some other activities, parents have been apprehensive in allowing their sons to participate in the sport.

“I don’t know that we had one concussion last year,” Grant said. “But there was so much hype and media hype about concussions, that a lot of parents pulled their kids from it (football). So football numbers everywhere are down and we’re certainly no different. I always look at it (as) if we’ve got a problem, everybody else has got a bigger problem in terms of numbers.”

Enrollment at Eden Prairie High School has for decades been among the largest in the state. In the EP football system, Grant estimated participation numbers are off by about 30 percent. The trend is more skilled athletes are likely still participating but the marginal players, who Grant said can really benefit from football, may not be.

The varsity Eagles were a senior dominated team last season. “I thought we were the best team in the state last year,” Grant said. Only a few starters return for 2021 but a lot of others on the 2020 roster came off the bench and gained experience. “We’ll be as good as we’ve ever been,” the coach said about the coming season.

This week will significantly influence whether Richard Pitino’s Golden Gophers basketball team earns an invitation next month to the NCAA Tournament. Minnesota lost at Maryland Sunday, but tries for its first road victory of the season tonight (Wednesday) at Indiana, and then plays No. 5 ranked Illinois in Williams Arena Saturday.

A major positive is the Gophers, 6-8 in the Big Ten and 13-8 overall, have tied a school season record by defeating five top 25 ranked teams. A road win tonight and a home upset of Illinois would bolster Minnesota’s wobbly win-loss record. That’s not likely to happen but if the Gophers could pull to 8-8 in league games by Saturday night, NCAA prospects boldly brighten with two of their three remaining games at home. Northwestern (Feb. 27) and Rutgers (March 6) come to Williams Arena, with Minnesota playing at Penn State March 3.

University officials provided no update at last week’s Board of Regents meetings about borrowing money to cover the system’s anticipated budget shortfall of perhaps $166 million. Details are apparently yet to be finalized including a significant portion of the loan targeted to Gophers athletics whose deficit this fiscal year is speculated to be $40 million or more.

The Timberwolves’ next road game is Sunday in New York where the Knicks feature familiar faces. Knicks coach Tom Thibodeau, whose demanding style helped the Wolves to a rare playoff appearance before being fired, has the lowly New York franchise earning a better record than the Wolves, 14-15 versus 7-21. This is Thibodeau’s first season with the Knicks and two of his player favorites are former Wolves Taj Gibson and Derrick Rose. New York media speculates whether Thibs will clash and last with controversial Knicks owner James Dolan.

Don’t fret yet but offseason additions by the Chicago White Sox, including former Twins pitchers Liam Hendriks and Lance Lynn, have crystal ballers making the Sox favorites, or co-favorites with the Minnesota Twins, to win the AL Central Division. Hendriks has ERAs under 2.00 the last two seasons as a late inning stopper. Lynn could win 15 games or more for the Sox. Vegasinsider.com lists the Sox as 10-1 World Series favorites, with only the Los Angeles Dodgers, New York Yankees and San Diego Padres more likely to win out in 2021.

Ben Reppenhagen, the Edina native who played high school football at St. Thomas Academy, is a redshirt freshman tight end at TCU and grandson of the late Mike Wright, the 1959 Gophers football captain.

Guess who is only four years away from eligibility for Social Security? Michael Jordan is 58 today.