The 8-1 Vikings have won four of their games by four points or fewer. “Close shaves” are commonplace in the ultra-competitive NFL and there is reason for concern with kicker Greg Joseph.

Joseph missed four extra points last season and already has that many in 2022. His four misses are tops in the NFL, per Lineups.com. He has failed to convert an extra point in almost half the games so far including last Sunday against the Bills when the Vikings needed overtime to win.

A missed extra point can change the strategy of a game, forcing a team to deviate from preferred options and sometimes compounding a bad situation with poor choices. Missed PATs can also change a season or playoff success. How unfortunate for the Vikings if during this so far magical season things went south in the playoffs with a missed conversion that blocked their postseason path.

Joseph has been okay on field goal attempts, making 72.1 percent. He is a perfect 12 of 12 between 20 and 49 yards but just one of six from beyond 50. He has been mediocre on touchbacks, with 55.3 percent of his kicks not being returned.

Meanwhile the Raiders’ Daniel Carlson, the former 2018 Vikings fifth round draft choice who coach Mike Zimmer became impatient with after just two regular games and released, is a perfect 18 of 18 on field goals including five from 50 yards or more. He has missed one extra point.

Joseph, 28, signed with the Vikings as a free agent in the 2021 offseason and has made multiple NFL stops including game appearances with the Browns and Titans. He told Sports Headliners earlier this fall he hopes to keep playing well into his 30s: “Oh, I feel like I’m only gonna get better and better and stronger and stronger, which is exciting. I keep trying to reset my ceiling every year. So yeah, just excited. …”

Long snapper Andrew DePaola said he and Joseph and holder Ryan Wright are good friends. They will go out to dinner together, golf or shoot paint ball guns. Any miscues on the field are felt by all three, DePaola told Sports Headliners. “…It’s tough when things don’t work out the way you want them to,” he said.

DePaola also said Joseph has the following mental approach: “not too high, not too low, just try to stay in the middle and do our jobs the best we can.”

Vikings leader and safety Harrison Smith said teammates are supportive of Joseph, regardless of results. Smith also said, “Kickers, you don’t want to mess with them too much. Let them do their thing but definitely let them know we have their back.”

Vikings left guard Ezra Cleveland talking about second year left tackle Christian Darrisaw moving toward the NFL elite at his position. “For sure, with the way he works and the way he has been playing. If he is not already there, then he is on his way.”

Cleveland said with the Vikings playing Sunday and then again on Thursday, players will need to start their recovery process sooner than in a normal week. Instead of Monday, body work will start Sunday night after the game at U.S. Bank Stadium against the Cowboys and in preparation for the Thanksgiving evening home game with the Patriots.

Cleveland said growing up his mom prepared corn beef and cabbage for Thanksgiving dinner. Last year he smoked his first turkey and probably will prepare another this week for his girlfriend and dad. “May be out-source the pie…or something. I don’t know how to make pie.”

Tight end T.J. Hockenson played against the Cowboys earlier this season before the Lions traded him to Minnesota. He said that familiarity with scheme and personnel could be helpful. He caught four passes for 48 yards in his team’s 24-6 loss to the Cowboys.

Smith said the feeling around this year’s team is unique to what he’s experienced before in his 11 years with the Vikings. “We feel good about what it takes to win when the time comes. It doesn’t mean we can’t play better, different spots here and there. …”

Smith on 32-year-old cornerback Patrick Peterson who had two interceptions and three solo tackles against the Bills: “He is running around like he’s a young kid. Looks explosive and springy and just ready for action.”

Former Vikings linebacker Ben Leber on Twitter writing about his old team: “One very noticeable trait to this Vikings team is no matter what happens, there is no flinch… especially on defense. It’s all about lining up and playing the next play no matter what. Incredible.”

Golfweek.com reports Kirk Cousins and his wife have purchased a golf course in western Michigan near Holland. He and Julie have a home in the area, are familiar with the course and know the previous owners, per a November 10 online story in the Holland Sentinel. 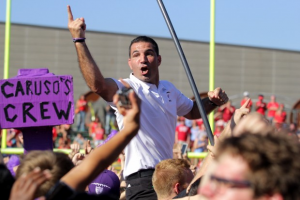 Congratulations to St. Thomas for winning the Pioneer League football championship with a 8-0 conference record. The Tommies won a league championship in just their second year as an FCS program with about two-thirds of their 22 starters being Minnesota natives.

Tommies coach Glenn Caruso, who has led a remarkable transition from Division III to Division I, wowed a CORES lunch crowd earlier this month with his authenticity and commitment to his players. He wants his student-athletes to have different experiences and that’s why the Tommies will play a home-and-home against Harvard starting next year in Boston, with a return date in 2029 in St. Paul.

Condolences to the family and many friends of legendary University of St. Thomas and Cretin Derham-Hall baseball coach Dennis Denning, 76, who passed away last week. St. Thomas men’s basketball coach John Tauer wrote this on Facebook: “Six state titles and two national titles pale in comparison to the indelible impact he had on all of us. He taught us to ‘Dare to be Great’ and it remains one of our program mantras.”

“The Amazing Hondo”, the popular magician and former St. Paul athlete, is among the many mourning the loss of Dennis. He emailed to share the news his former Winona State basketball coach Les Wothke and Dennis both passed away last Wednesday. Wothke, 83, took Winona to the NAIA finals in 1973 and 1975 and later was head coach at Army. “Losing two legendary coaches on the same day is something I shall never forget,” Hondo wrote.

Early season home results: Tauer’s Tommies defeated (on November 11) St. Francis of Brooklyn, 84-48, two days after the Gophers beat them, 72-54. Down the road a game between the two Minnesota Division I programs seems likely.

As of Friday, Ben Johnson’s Gophers had made .543 percent of their free throws in four games, ranking No. 339 in the country.

Tip of the cap to the Twins new uniforms with clean looks and various offerings. Just in time for holiday shopping.

The Athletics latest NHL power rankings have the Devils No. 1, the second-season Kraken No. 12 and the Wild No. 17 among 32 teams.