Pay Coming for U Football Players, Others?

It looks more and more like Power Five football players, including the Gophers, will in the future be paid for their services on the field. National and local authorities are talking about these athletes sharing in the riches of major college football.

“There will be pay-for-play, in my opinion, in the near future,” Joel Maturi told Sports Headliners. The former Gophers athletics director offered that view while making it clear he isn’t speaking for the University of Minnesota or other schools.

Former University of Minnesota regent Michael Hsu said the change to employee status could come as soon as the 2024 season. The timing will be driven by litigation in the courts versus voluntary change by commissioners and school leaders in the Power Five conferences.

New NCAA policy now allows schools to provide financial support to student-athletes for academic success. The Gophers plan to institute the policy in the fall and it goes beyond the scholarship benefits student-athletes have long received. Schools are allowed to pay out up to $5,980 per year to an athlete. A ruling by the U.S. Supreme Court a year ago opened the door for schools to pay athletes.

The times are changing fast in college sports and there is a wave of new found freedoms for student-athletes. The transfer portal allows athletes to become free agents on a whim, with thousands choosing new schools where they have immediate eligibility. The Name, Image & Likeness (NIL) phenomenon is allowing athletes to monetize their success on the field or the court with endorsements, personal appearances and other marketing.

The recent announcement of USC and UCLA to join the Big Ten starting in 2024 may provide momentum to the pay-for-play movement. “Yes, I think it puts pressure on them (the schools) to voluntarily collectively bargain,” Hsu told Sports Headliners.

USC and UCLA, based in Los Angeles, give a soon to be 16-member Big Ten a TV presence in the nation’s three largest markets, New York, L.A. and Chicago. The Big Ten’s media rights deal expires in 2023 and adding the two California programs, including an elite football brand in USC, only increases the riches expected in the next TV bonanza.

Hsu, an outspoken advocate for compensating athletes, said that before the Big Ten’s announced expansion there was speculation each Big Ten school could receive up to $110 million annually. Now there should be even more money coming into athletic departments including at Minnesota. “It’s the TV people driving all of this,” said Hsu who was an early advisor to the Minnesota-based College Football Players Association.

The new TV windfall could easily be double the $50 million or so payout the Gophers receive in the present Big Ten rights agreement. Maturi predicted the new deal will be a lot more than the entire athletic department budget of about $56 million in place when he was hired at Minnesota in 2002.

The Big Ten’s expansion is further strengthening its position as a super conference. It’s a league with a great legacy and fan following, with more eyeballs likely watching its football teams in 2024 than ever before. Big Ten football has long been a business but it’s becoming more so, with Hsu and others wanting to see players compensated for their efforts.

“When you put players on airplanes to fly them six hours coast-to-coast to play games…to say they’re student-athletes and not employees—I think it’s going to put further pressure on that definition,” Hsu said in reference to Big Ten expansion. “I think it’s going to put further pressure on the fact that everyone is looking at where the money is going…the players are going to start realizing that really this NIL stuff is a joke compared to how much they’re worth actually to the teams that they’re playing for.”

Pay-for-play could take on various models. Hourly pay has been discussed as well as salaries. Bonuses could be part of how football players are compensated, too. Revenue sharing with the athletic departments will also be on the table. “I don’t think it’s going to be any one thing,” Hsu said.

Maturi said he can’t predict what form pay-for-play will take. “None of us knows what that means. Is it going to be open market where you can pay what you wish? …” 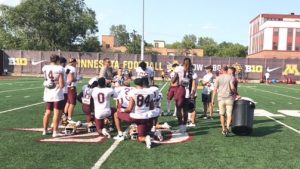 In a short time a lot will be decided about the college football model. There will be protests from other college sports if football players are receiving salaries and other athletes aren’t. Those differences, Hsu suggests, could even lead to schools like Minnesota selling off the football program to an outside entity that runs Golden Gophers football. Other sports could remain under University control and benefit as they do now from football profits.

There is speculation the Big Ten may further expand its membership. While schools are lined up at the door to join the conference, new members could reduce the slice of revenue pie for existing members. Applicants will have to bring considerable value monetarily and fit the academic pedigree of Big Ten institutions.

“Let’s face it, everybody wants to join the Big Ten now with the mega TV contract that’s coming up,” Maturi said. “And that’s gotta be decided by the commissioner (Kevin Warren) and the presidents and chancellors of the Big Ten.”

Looming as a big prize is Notre Dame, the juggernaut football independent that could make more TV money joining the Big Ten but would have to sacrifice controlling its schedule of opponents and perhaps lessen its chances of qualifying for the college football playoff.

“Right now Notre Dame is leaving money on the table,” Maturi said. “It already has. They don’t get the money from NBC that they would have gotten by joining a (major) conference, but they’ve kept what they believe is their mission, their values, their principles—and how long they’ll be able to continue to do that remains to be seen.”

Former Gophers football coach Glen Mason can see a Big Ten with 20 teams. “I don’t think we’re done yet (with expansion). I think there’s going to be two premier conferences. The way I see it as a fan, it will be the Big Ten and SEC. Probably both eyeing…to get 20-team leagues.”

Mason isn’t sure if he approves of pay-for-play but he recognizes players are in a far different world than when he competed for Ohio State in the early 1970s. “It was not a year round job,” Mason said.

Mason looks at schools like USC, UCLA, Oklahoma and Texas jumping leagues and asks where is the loyalty to their conferences? The Sooners and Longhorns are leaving the Big 12 and bolting for the SEC, just like USC and UCLA are on their way out of the Pac-12. Those moves create a lot of problems and stress for the remaining members of their conferences.

When Mason coached at Kansas in the Big Eight the power players were Oklahoma and Nebraska. Those schools questioned whether they should share revenues in the same amounts as their Big Eight peers, or keep more for themselves.

“You can see the disparity in that,” Mason said. “Those discussions when I came back to the Big Ten, those never came up. You never had the big dogs on the block, Ohio State and Michigan, talking about that. They realized they were partners in the Big Ten and even though they might be the guys driving the train, that’s just the way it was.”

In the new world of college football it’s more business focused than ever. “We’re lucky we have the membership in the Big Ten,” Hsu said about Minnesota.