What kind of statement will the Golden Gophers football team make in its last two regular season games of the year? The results of Saturday’s home game against Iowa and then November 26 at Wisconsin will say a lot about the program’s status.

The view here is it’s time for the Gophers to earn 2022 and historical redemption. Minnesota coach P.J. Fleck, who was hired in January of 2017, is 0-5 against the border rival Hawkeyes from Iowa. Worse, the Gophers haven’t defeated Iowa since 2014. That win was in Minneapolis and the last victory for the Gophers in Iowa City was 1999. 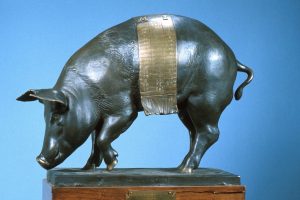 There have been near misses for the Gophers in recent years but “what-ifs” won’t bring the famous bronze pig, Floyd of Rosedale, back to Minneapolis. Minnesota still leads the all-time series 62-51-2, thanks mostly to a stretch of dominance prior to World War II. But the 5-17 record of the new millennium gives passionate Gophers fans pain—hungry as they are for bacon, pork and ham.

Iowa won’t look much different on Saturday than in the recent past. The Hawkeyes’ defense (again) deserves mention with the best in the nation. Mostly a unit with developmental players, including Iowa natives, the Hawkeyes don’t beat themselves with mistakes and they stay true to their assignments. They’re a physical bunch that can knock the enemy on their collective butts and force turnovers.

As usual, Iowa plays for field position and boasts a great punter in Tory Taylor. College football rosters often have Australian punters these days (including Minnesota’s Mark Crawford) but Iowa’s Aussie is special. Taylor ranks third in the Big Ten with a 44.1 yards average for conference games and is deft at sending the football where he wants it to stop.

If you want to piss off Iowa fans, just bring up the names of offensive coordinator Brian Ferentz and quarterback Spencer Petras. Struggling offenses are nothing new at Iowa under Brian and there was an offseason fan petition supporting the dismissal of Iowa head coach Kirk Ferentz’s son.

Early season offensive production was low even by Iowa standards. The Hawkeyes relied on two safeties and a field goal for points in their season opener, a 7-3 win over South Dakota State. A week later Iowa managed a single offensive touchdown in a loss to Iowa State and even last month the offense was awful in losses to Illinois and Ohio State.

The Gophers can thump their collective chests over their defense, too. Minnesota ranks third in the Big Ten in scoring defense (16.3 points) for league games, while Iowa is fifth (18). Iowa is giving up 289 yards per league game, Minnesota 318.4, placing both programs among conference leaders. Defensive coordinator Joe Rossi, like Iowa counterpart Phil Parker, is a gem.

Who wins Saturday? The Gophers could be too emotional for this game at Huntington Bank Stadium and not stay true to their assignments and abilities. But home field and the crowd should be an advantage. If the crowd is at its noisy best, that could cause the Iowa offense to be confused when Petras and the Hawkeyes call signals and attempt to run plays. 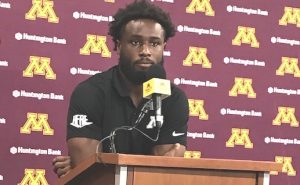 To win, the Gophers will need to find their often missing passing game. Minnesota’s quarterback (either Tanner Morgan or Athan Kaliakmanis) will have to make clutch throws to loosen up the Iowa defense. But even with timely and accurate passes, is the suspect Minnesota receiving group going to get separation from defenders and consistently catch balls? Then, too, the offensive line will have to play at its highest level of the year to pass protect the quarterback and provide All-American tailback Mo Ibrahim occasional daylight.

If the Iowa defense forces the Gophers into turnovers and scores off them, it’s all but certain Fleck goes to 0-6 against the Hawkeyes. But in dreary November, why not be an optimist and predict the Gophers’ defense forces Iowa into mistakes and the Minnesota offense is just good enough in a 16-10 win bringing Floyd of Rosedale home.

Redemption road will then present the challenge of defeating Iowa and Wisconsin in the same season for the first time since 1990. Fleck’s teams have won twice against Wisconsin, most recently in Minneapolis last year.

The Gophers will not have a gimme task in Madison. Not with interim coach Jim Leonhard hoping to get the head job permanently and having a roster of players (presumably) all in on the former Badger defensive coordinator. A Wisconsin native who played for the Badgers, nobody has to give Leonhard a history lesson about another famous travelling trophy, Paul Bunyan’s Axe that annually goes to the winner of the Gophers and UW game.

The Badgers’ defense will challenge the suspect Minnesota passing game and if the Gophers have to rely just on Mo, the Axe could be residing in Madison for the next 12 months. The Wisconsin offense is similar to the Gophers, led by superb tailback Braelon Allen but unable to sustain a top passing attack with inconsistent quarterback Graham Mertz. The Badgers are 5-5 overall and 3-4 in conference games.

The Gophers, 7-3 overall and 4-3 in Big Ten games, will write a fulfilling script if they can finish the season with two wins. Fleck and Henry Williams are the only Minnesota football coaches to twice win nine games. Six Big Ten victories would match last year’s 6-3 record and be one win shy of Fleck’s 7-2 mark in 2019. Going 9-3 overall and 6-3 in the conference would boost Fleck’s record at Minnesota to 44-26. That’s a winning percentage of .628 that would rank third among all Gopher head football coaches who coached 45 games or more.

Expectations before the season were that it was finally time for the Gophers to win their first West Division championship. The talent appeared sufficient and the division competition mediocre, but a three-game conference losing streak in October was a major blow, although mathematically the Gophers are still alive in the race.

Illinois, Purdue, Iowa and Minnesota all have the same conference records as they compete for the West Division championship. Unlikely as it may seem, the Illini, Boilermakers and Hawkeyes could all lose a game before the regular season ends. Illinois and Purdue hold wins over Minnesota, and so any tiebreakers in the division standings with the Gophers will go to the Illini and Boilers.

None of the teams in the West, including the title contenders, will be remembered as great teams stocked with future pros. The Athletic’s Chris Vannini offered a ranking this week of major college football’s 131 teams and the list included No. 27 Illinois, No. 30 Minnesota, No. 40 Iowa, No. 41 Purdue and No. 54 Wisconsin.

Long suffering Gophers fans sometimes feel the program that once specialized in Big Ten titles and national championships is just never going to win the West. Well maybe the ghost of Bernie Bierman will hex the Hawkeyes, Badgers, Illini and Boilers, and inspire the Golden Gophers. Wins over Iowa and Wisconsin, and a first-place finish in the West, would be the ultimate Redemption Road for the Gophers.