In a telephone interview with Sports Headliners, Richard Coffey was vehement concerning what he said are untrue rumors that his son Amir Coffey hates Golden Gophers head basketball coach Richard Pitino. Amir, a junior, is in the process of deciding whether he wants to skip his senior season at Minnesota and enter the NBA Draft.

“It’s amazing how people hear something and they just run with it,” Richard said about comments his son dislikes Pitino. “First of all, we don’t use the word hate in our family. We don’t hate anything, or anybody. That upsets me, when people use that word because there is so much hate in our country, and hatred only divides. I didn’t raise my kids to hate anyone, or to use that word. It upsets me when people read something or see something and then take it as truth.

Richard said if Amir decides by late May not to enter the 2019 NBA Draft, he will return to college basketball and guaranteed his son will play for the 2019-2020 Gophers. “So stop speculating on it,” Richard said.

In two of Amir’s three seasons Pitino’s Gophers have earned their way into the NCAA Tournament. They also won the NIT Tournament in New York in 2014. “Pitino is the coach of the University of Minnesota. We respect that,” Richard said. “Pitino has been here for six years and been to three postseasons. That’s a pretty good record.” 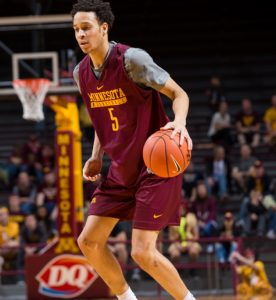 Amir remains enrolled at Minnesota and is attending classes this spring. When not pursuing academics, he is training for a pro career that could begin after the June 20 NBA Draft. The Coffeys are being assisted in the fact-finding process about how NBA teams regard Amir by Excel Sports Management based in New York.

A select number of potential NBA draftees are invited to the NBA Combine where in mid-May in Chicago they are closely evaluated by representatives from the league’s 30 franchises. Those Combine invitations have yet to be sent out and Amir doesn’t know if his name will be on the invitation list. Under NBA and NCAA policy, underclassmen like Amir have until May 29 to retain their college eligibilities and play next season.

Amir, 6-foot-8 and about 205 pounds, was a third-team All-Big Ten selection last season and was at his best in March, often making key plays in important games. The Gophers’ leading scorer, he was among the league’s most versatile players both offensively and defensively. He played point guard and wing for Minnesota while averaging 16.6 points and starting every game.

Richard has a lot of basketball expertise, having been a four-year starter for the Gophers from 1986-1990, including being a terrific effort front court player and rebounder on two NCAA Tournament teams. He also played professionally including for the Minnesota Timberwolves. He said the training and evaluation his son is receiving now will make him an improved player in either the pros or with the Gophers.

The Gophers lose four seniors from this year’s tournament team, and the likelihood for a successful season in 2019-2020 could well be predicated on a Coffey return. “We haven’t really thought about that (Amir’s importance),” Richard said. “At this point we are in a process of trying to find out from professionals their opinion on Amir. When we get that information we are going to use it to make a sound, intelligent decision on whether Amir comes back to school, or whether Amir stays in the draft.”

NBAdraft.net, in its April 18 mock draft, didn’t include Coffey among the players it projects being picked in either the first or second rounds. The website predicted Maryland center Bruno Fernando being the first Big Ten player drafted with the Timberwolves using their first round selection at No. 10 on him.

Bryant Pfeiffer, the Minnesota United’s chief revenue officer, said the club’s new Allianz Field can potentially be expanded to a seating capacity of 25,000. The United played its first match ever in the privately financed facility earlier this month before a standing room only crowd of 18,796.

There are no immediate plans to expand the stadium but the United has 5,000 people on a waiting list for season tickets, Pfeiffer told Sports Headliners. The club capped its season tickets at 14,500 this year to leave room for single game and group sales.

A career sports marketer, who lives in Minnesota but prefers to speak anonymously, predicts the Twin Cities will have another men’s Frozen Four in six to eight years, and men’s basketball Final Four in 10 to 12.

He doesn’t think the Super Bowl will return to Minneapolis for a long time, and it’s unlikely the college football national championship game will ever be played here. Those games are played in January and February when the Minneapolis winter weather makes it difficult and even impossible to stage the kind of auxiliary outside events promoters require and prefer.

“Behind the Game,” the Twin Cities cable TV show with co-hosts Patrick Klinger and Bill Robertson, has a current interview with longtime Pioneer Press sports columnist Charley Walters. The former Edison High School athlete had a brief career with the Minnesota Twins and it was 50 years ago this month he made his Major League debut.

Condolences to family and friends of Bill Ferril who passed away last week. Bill, formerly of Wayzata, was a successful businessman and dedicated booster of Gophers basketball.