Rod Carew’s new book is on sale and it’s no ordinary tale about a sports hero. In One Tough Out: Fighting Off Life’s Curveballs (Triumph Books), the former Minnesota Twins second baseman describes his remarkable life and the obstacles he overcame to become one of the greatest hitters of the last century and a Cooperstown Hall of Famer.

Early in the book Carew, now 74, talks about his negligent and abusive father Eric. Living in poverty in Panama, Carew’s mother Olga earned $1 per day as a housekeeper. Eric spent much of his modest paycheck on booze.

“Most of my clothes were hand-me-downs,” Carew writes in the book with co-contributor Jaime Aron. “Previous owners wore them for as long as they could. By the time I got them, there wasn’t much left. At one point, my only pair of shoes had soles that flapped against the bottom of my feet when I walked. At school, I walked alongside a wall in hopes that no one would notice. I had to make do until my mother could find me a replacement.”

Eric worked on a tug boat and was a big man at 6-foot-3. Rod was often sick and weak so his father belittled him, calling the child “Sissy.” Carew speculates his father decided in his twisted view of parenting that physically abusing his son would toughen him up.

“Early on, he would shove me into a broom closet and keep me trapped inside for hours,” Carew recalled in the book. “His next step toward making a man out of me involved his fists. Nights when he drank heavily, his fists weren’t enough. His arsenal grew to include a rope, a strip of wood, the knotted cord from an iron, and the wide leather belt around his waist. These weren’t isolated incidents.”

Those beatings and rejections by Carew’s father were traumatic but his mother saved his self-esteem and at an early age put thoughts of success in his head. Olga and Eric had other children but she favored the boy and told him he was special.

“Long before Earl Woods prophesized greatness for the boy he named Tiger, my mother was infusing me with the confidence that I would grow up to make a mark on the world,” Carew said. 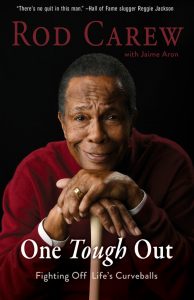 Olga, too, was physically abused by Eric. She eventually escaped to New York City and earned enough money in a factory to bring Rod to a new life as a 15-year-old in 1961. It was the beginning of a journey that would document success experienced by few ballplayers. First playing for the Twins and later the Angels, Carew won seven batting titles, played in 18 consecutive All-Star Games and collected 3,053 hits.

During Carew’s life, he has not only overcame a difficult childhood, but endured the tragic loss of a daughter to leukemia. In 2015 Carew fought his own health battle when his heart stopped, but remarkably he received a heart transplant from a 29-year-old he had met years before.

Carew’s life more than earns the title of his autobiography. “There’s no quit in this man,” Hall of Famer Reggie Jackson says on the book’s cover.

Ross Bernstein, the Golden Gopher hockey mascot from 1989-1991, is a prolific speaker to business groups and has averaged about 120 keynote addresses per year but because of the COVID-19 epidemic is doing virtual presentations this spring. The Twin Cities-based Bernstein has spoken on seven continents and also authored 50 sports books.

Motzko has an impressive 11 Academic All-Big Ten honorees this winter, although none has a perfect GPA like Lindsey Kozelsky from the Gopher swimming and diving team. Kozelsky, an elementary education major, is one of 23 Big Ten student-athletes to have such a distinction.

Vikings coach Mike Zimmer joking from home in Kentucky about how he is coping with the disruption of leading his team: “We’re just hoping it’s not my other eye that goes.”

The Gophers’ 37-year-old Richard Pitino ranks No. 7 in a listing of the 40 best under 40 college basketball coaches in the country, per an Espn.com story yesterday.

Zack Johnson, a 2015 Spring Lake Park grad, could play against his hometown Vikings later this year if he can make the Green Bay Packers roster. The 6-6, 301-pound guard signed with the Packers as a rookie free agent this spring after an All-America career at North Dakota State.