Transitioning from Division III, the University of St. Thomas takes its 22-sports program into Division I competition in a year.  Tommies men’s basketball has the long-term potential to become the first money-making program in the athletic department, and perhaps one day emerge as a high profile national team.

School athletics director Phil Esten was asked about the program eventually earning that kind of success.  Maybe in 10 years?  “I certainly think that we’re going to make progress toward that,” Esten told Sports Headliners.

Right now the Tommies are at the starting line.  For the first five years, men’s basketball and the other UST sports aren’t eligible to participate in NCAA Tournaments.  Men’s basketball and most of the other UST sports will compete in the Summit League. The initial goal is for the basketball team to soon hold its own in a mid-major conference that includes four schools from the Dakotas. “I think we can be a very competitive basketball team (in the future),” said Esten, who has been a high level athletics administrator at Minnesota, California and Penn State.

In men’s basketball the Tommies can target the quality recruiting base in the Twin Cities area. “There’s a lot of very deep and rich talent in the state of Minnesota,” Esten acknowledged.

The Gophers have been the state’s only Division I program in the past but Minnesotans will now have a second choice to compete at the NCAA’s top level while staying close to home.  “There’s plenty of talent I think for St. Thomas to be able to recruit a couple (standouts) every single year,” said Esten who believes preps in Wisconsin and Illinois could also be prime targets.

Former University of Minnesota Big Ten championship coach Jim Dutcher has been impressed with the quality talent within the state.  “…Some of the players that Minnesota may hesitate on, they (the Tommies) may be able to get in the door,” Dutcher told Sports Headliners. 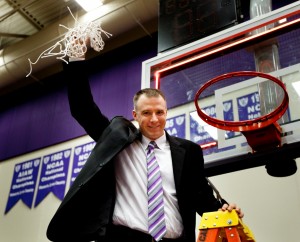 St. Thomas will make the transition to Division I led by coach John Tauer.  The Tommies have been a national power in Division III under Tauer, and won the 2016 NCAA championship.  A Tommie alum, he has a passion for the school, and has built a strong relationship with Minnesota high school coaches.  He will be expanding his staff to better compete at the Division I level, according to Esten.

Esten said already “we’ve had some pretty interesting conversations” from prominent men’s and women’s basketball schools about scheduling St. Thomas teams in the near future.  While some schools may look at the initial Tommies teams as easy opponents and want St. Thomas only for their home games, Esten said a couple of programs have expressed interest in coming to the Twin Cities for games, too.

Motivation to travel here includes exposure to the state’s recruiting talent, but Esten said there is also a willingness to help UST successfully start its men’s or women’s programs.  While Esten wants most basketball games played on campus in the school’s 2,000 seat arena, he is willing to consider an attractive matchup in a much larger venue in either Minneapolis or St. Paul.

No doubt such a game would attract a portion of UST’s 110,000 alumni, a large percentage of who live in the Twin Cities. Those Tommies alums are expected to support St. Thomas in greater numbers than in the past for various sports.  The spectator turnout for UST home games will also benefit from the approximately 40,000 people in the Twin Cities who are alums of various Summit League schools.

The Tommies wouldn’t schedule a showcase basketball game at a Target Center or Xcel Energy Center without believing it would be a money-maker.  The men’s and women’s programs could eventually become competitive enough to spark conversation about building an on-campus arena, perhaps seating 8,000 to 10,000 spectators.  Esten is a proponent of playing in on-campus facilities. In the meantime, the Tommies men’s basketball program may soon receive six-figure paydays by agreeing to play at the home arenas of Division I powers from conferences like the Big Ten and ACC.

The school leadership compares UST with other well-known urban Catholic universities.  With factors such as geographic location, endowments, curricula, graduation rates, and job placements, administrators say St. Thomas is similar to schools like Creighton, Dayton, Marquette, Villanova and others.  Those schools, of course, have great basketball legacies including national titles.  Three of the four (Dayton not included) are members of the prominent Big East Conference where a former St. Thomas insider told Sports Headliners he thinks the Tommies could land 10 years or more down the road.

Because of the pandemic the total St. Thomas sports program has one more uncertain year of competition in the MIAC before it exits to Division I.  The COVID-19 virus already has caused MIAC decision makers to move the football season to spring.  The UST football schedule had included a November 7 date at U.S. Bank Stadium against St. John’s to be hosted by the Johnnies.

Esten believes in normal times the game might attract at least a near capacity crowd at the Vikings’ home stadium.  Tommies-Johnnies is a legacy rivalry that a few years ago set an all-time record for attendance at a D-III game, with an announced crowd of 37,355 at Target Field.  That record has since been broken, but with U.S. Bank Stadium’s football capacity of nearly 69,000, a UST-St. John’s game would have the potential to set a Division III record (perhaps never to be broken).

Whether there is a game in 2021 or not, the end appears near for the nationally publicized football rivalry.  UST will be a FCS Division I program competing in the Pioneer Football League in the fall of 2021.  Esten couldn’t think of a game matching a Division I program against a Division III team, referring to it as “very rare.”

By transitioning to Division I the Tommies are expected to grow their subsidized athletics budget by three or four times.  The initial budgets perhaps will be $21 million to $25 million.  The school, though, is firmly behind the transition, citing multiple benefits ranging from competing in sports at the Division I level to extending the UST brand across the region and country.

In retrospect did the MIAC do the Tommies a favor by unexpectedly asking UST to leave the conference because of the school’s dominance in athletics?  Esten said no, referring to the disappointment of the surprising news and the ending of 100 years of association with the conference.  “It was really sad,” he said.