The ninth inning performance of New York Yankees super reliever Aroldis Chapman in Tuesday night’s All-Star Game should have sent a message to Twins fans. Chapman, with his dominating fast ball, struck out the side to preserve the American League’s 4-3 win.

If the Twins are to qualify for the postseason and have a chance against baseball’s “big boys,” they need to make quality additions to the pitching staff. Minnesota leads major league teams in multiple hitting statistics including most home runs, runs batted in and slugging percentage. Minnesota is tied with the Red Sox for the best team batting average at .272. The Twins’ gaudy offensive production is exciting to watch and at times has dominated opponents but adding big contributors to the starting and relief pitching staffs should be a must-do for the front office.

The Twins have a window of opportunity this season they can’t count on in 2020 or beyond. The kind of production the Twins have from their position players (including defense) isn’t something to expect every year. Front office execs Derek Falvey and Thad Levine are reportedly focused on adding pitchers and rightfully so because the franchise needs to maximize this season not only for themselves but for the fans.

The Twins drew less than 2 million fans to Target Field last season, with the lowest total attendance since the outdoor ballpark opened in 2010. Season ticket numbers have declined for awhile now. The Twins went into this season facing an apathetic fan base but the excitement of a power hitting club and first place position in the Central Division has brought both loyalists and the curious to Target Field in large numbers as of late.

The franchise has a longtime reputation of allegedly not being willing to spend money on players the way rivals do. Former GM Terry Ryan was a sharp baseball mind but seemed to be a conservative spender. The club has long maintained ownership is willing to spend additional and sometimes mid-season payroll dollars to attract talent that can put the club in the best position to contend.

Well, now comes an extraordinary opportunity with evidence mounting the Twins will need to upgrade the pitching to stay out front in the division. Minnesota was 15-12 in June and so far in July has lost a series to the Oakland Athletics and won one against the Texas Rangers. The Twins’ only rival for the division title, the Cleveland Indians, have cut Minnesota’s lead from double digits to 5.5 games. While the Indians have won six consecutive games and seven of their last 10, the Twins have been challenged with a run of injuries to key players including staff ace Jake Odorizzi and an overall pitching shortage.

In perhaps the most anticipated match-up of the season so far, the Twins play a three-game series in Cleveland starting tomorrow night. When everyone looks in the “rear view mirror” in September, the results could be seen as one of the key weekends for both teams.

The club’s offensive production has headlined a “fireworks show” in major league baseball that has been attributed to hitters swinging for distance and the manufacture of long ball friendly baseballs. Multiple sluggers are in contention to reach the hallowed ground of 60 home runs or more. That prospect is a jolt to baseball purists who have mourned the rewriting of baseball records during the steroid and alleged juiced ball eras of the past.

Former Twins manager Paul Molitor told Sports Headliners he doesn’t want to “diminish some of the things people (hitters) are doing” but he is certainly aware of baseball’s power surge. “…It sure seems like some pretty funny swings at some pretty tough pitches are going a long way by some guys that don’t look like they would overpower a baseball,” he said.

There is no reason to anticipate a change in hitting headlines after the All-Star break. “It’s flying (the balls),” Molitor said. “Doesn’t matter where, what city, what ball park, we’re seeing record numbers and I don’t think that’s going to change at all during the second half.”

Longtime WCCO TV sports anchor Mark Rosen retired in January but continues to be heard on KFAN Radio. “It’s very liberating to be home at night,” Rosen told Sports Headliners. “I haven’t missed it (TV) for a minute. I really haven’t. It’s been great to be home. I keep more than my toe in the water with KFAN and got some big stuff coming up with the Vikings.”

Being at home more allows Rosen to spend more time with his wife of more than 40 years. Denise is dealing with cancer. “It’s a battle,” Rosen said. “Check ups every six to eight weeks with MRI. That’s the only way we know what’s happening. Other than fatigue, she is doing real well right now. That’s all we can do. We’ve got trips planned and really just doing day-by-day. ” 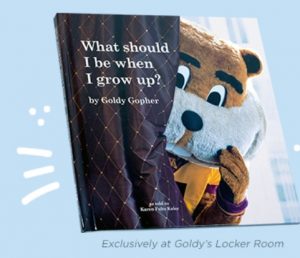 Goldy’s Locker Room has partnered with Karen Kaler (wife of former University of Minnesota President Eric Kaler) to publish a children’s book featuring Goldy Gopher. The book, including 47 photos, follows the popular mascot on a journey around the University as he explores various fields of study. Goldy discovers that with hard work he can be anything he wants when he grows up. Author proceeds, royalties and licensing fees from book sales support the Goldy Gopher Enhancement Fund benefiting future Goldys.

Karen Kaler dedicated the book to all the Goldys at the U throughout the years. “I was very fortunate to get to work with Goldy Gopher to tell his story,” she said in a news release statement. “Goldy and I both love children, so we want them to understand that studying and learning are important.”

The book is only available at Goldy’s Locker Room stores throughout the Twin Cities and online at goldyslockerroom.com.

Basketball is a lucrative sport at Duke where former Apple Valley star Tre Jones will be a sophomore starter in the fall. A Duke fan emailed that a public season ticket costs $2,660, plus a minimum donation of $8,000.