The Minnesota Twins won the World Series in 1987 and 1991.  The championships captured the attention of Minneapolis-St. Paul and the entire state as Twins-mania was felt everywhere from dramatic moments on the field to Home Hankies to World Series parades to depiction of the 1987 team on Wheaties cereal boxes.

A similar impact could be even more welcome this fall than decades ago when the Twins’ success dominated the state’s focus and culture.  Club president Dave St. Peter was with the Twins organization in 1991 and he spoke to Sports Headliners about the significance of a potential 2020 World Series winner in Minnesota.

“It would mean the world,” he said Monday.  “It would be tremendously rewarding to see our club back in that position.  But I think more important, it would be great for our community.

“I think about our city. I think about our state, and all the strife that we’ve dealt with during COVID, as well as the social unrest that we’ve experienced over the last several months.  For major league baseball, specifically Twins baseball, to play a role in bringing people together, that’s a pretty awesome opportunity and something we know would happen in spades if we played in the World Series.”

The Twins won their two World Series titles under the ownership of the late Carl Pohlad.  Now other generations of Pohlads, including executive chairman Jim Pohlad, are making decisions and following the club. “At the end of the day, I know Jim’s focus would be more…on how that World Series benefits our community over how it benefits the family,” St. Peter said.

A march to the World Series didn’t start well yesterday, with the Twins managing just four hits in an opening Wild Card 4-1 loss to the Houston Astros.  The defeat dictates Minnesota must win today and tomorrow to take the best two out of three series, and move on in the postseason. Otherwise, the goal in spring training and during the season of qualifying for the World Series will go in the dumpster.

“No doubt in my mind, that not only can we get there, but we can win it,” St. Peter said.  “We’re talented enough to do that.  I think there are a lot of other clubs across the game that believe the same, but in reality there can only be one.  Our goal is to go out and take this day-by-day, round by round, and hopefully put ourselves in that position to compete for it.”

The Twins have one of baseball’s deepest pitching staffs.  Depth is also apparent among position players with several Twins having experience at multiple spots led by do-it-all Marwin Gonzalez, who on any day might show up at first base, second base, third base or in the outfield. “I think our depth is perhaps our greatest strength,” St. Peter said. 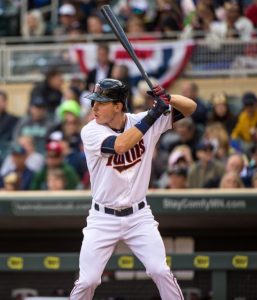 St. Peter likes the mix of veterans and young players on the roster.  The Twins built their success of recent seasons on young players up from the farm system like pitcher Jose Berrios, shortstop Jorge Polanco, first baseman Miguel Sano and outfielders Byron Buxton, Max Kepler and Eddie Rosario.  Over time veterans have been added including last offseason with pitchers Kenta Maeda, Tyler Clippard and Rich Hill, and slugging third baseman Josh Donaldson.

“We think those additions can be difference makers for us as we head into the October run of baseball,” St. Peter said.

Appreciated, too, about this year’s Twins team is how they have handled the response to COVID-19.  Players and staff have been accountable in their actions to benefit both themselves and others. “…Really, really proud of the way our group has handled that,” St. Peter said.

The Twins are playing their games against the Astros with only a couple hundred spectators in the Target Field stands.  Watching are club employees and families of Twins and Astros players. “…Our players are excited to have their families and fellow-employees at the ballpark,” St. Peter said.  “Everything that we can do to create a home field advantage we’re looking to try to create.”

MLB hasn’t allowed fans to attend games this season and won’t during the Wild Card games.  After those games the next two rounds of the playoffs will be played at neutral sites including Los Angeles and San Diego for American League teams, but again without fans. MLB has announced fans will be allowed to attend World Series games in Arlington, Texas but not offered specifics on numbers.

Minor league baseball is going through a reorganization and operating a Twins AAA farm club in St. Paul couldn’t be more convenient.  St. Peter said in the future it’s “certainly a possibility” a deal could be made to base a Twins minor league team at CHS Field in St. Paul, but a lot of things will need to happen before it could be reality.

St. Peter also said Twins TV viewership hit “historic numbers” last year and he expects data from this season to be similar.  TV watching across the country, with a glut of sports going on, is competitive.  Front Office Sports reported Monday that for the first three games of the Stanley Cup Finals viewership “was down at least 60 % compared to last season.”

Twenty-two of the 28 players on the Twins’ roster have playoff game experience.  The roster includes four catchers.

Among questions that should come up at the University of Minnesota Board of Regents meeting in October to discuss the elimination of gymnastics, tennis and indoor and outdoor track, is what would happen to any endowed scholarship money in those men’s sports.

Gophers basketball fans are wondering about the possibility of attending home games this upcoming season.  A fan reports season ticket renewals have been suspended since August.